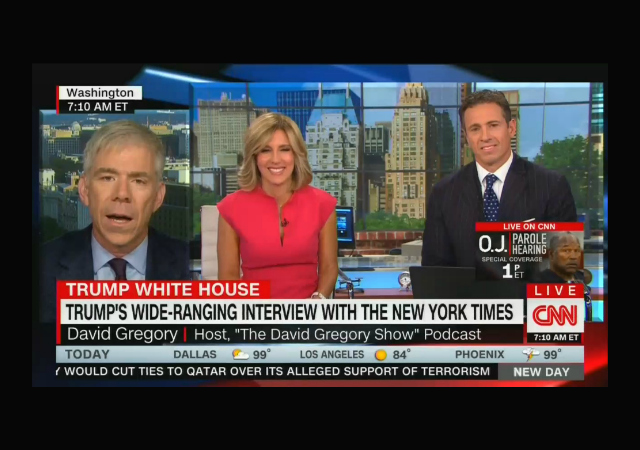 “It’s striking that the president who spends so much time trying to discredit the news media to convince his supporters simply not to believe outlets like the New York Times, in the end cannot quit Maggie Haberman and that’s just the bottom line. Because he wants legitimacy and he knows you have to go to Maggie and her colleagues who are really the journalists of record on this Trump presidency.”

The MSM has been harsh in its criticism of President Trump’s infrequent traditional press conferences, the curtailing of White House press briefings, and the president’s limited availability to the press. But when President Trump opens himself up to protracted questioning by reporters from an outlet that is generally antagonistic to him, that’s cause for criticism or mocking, too.

Note: Co-host Alisyn Camerota chuckles at Gregory’s “can’t quit” Haberman line. But a dead-serious Haberman can be heard off camera pointing out that “there were three of us.”

Note segundo: The “quit you” meme entered the culture via Brokeback Mountain, a movie depicting the romance between two male cowboys.

They are content creators who produce Potemkin news. Or fake news as Trump correctly refers to it.

In reality, they are producing content that sorta seems like “news” to lure in the kind of viewers the advertisers want to reach.

It looks like news. They speak in articulate language. No face tatoos or hair dyed blue. They look like what we imagine real “news” people would look like if any existed.

So did Howard Beale, Ron Burgandy, and Chevy Chase.

All propaganda, all the time.

David Gregory looks like he escaped from a nursing home.

the Fake Stream Media Complex – FSTM™ – are presstitutes and need to be treated as such…..

OK. How then to explain T-rump’s extended interview with the NYT?

Gregory has a point. T-rump himself sees the NYT as his path to legitimacy.

Ditto “Time” magazine. Even to the point of dummying up a fake “Time” news cover and having it slathered all over his properties.

If that isn’t sick, what would you define as sickness?

It’s very simple. How does Trump get his message to the rest of the country other than people who view this site, Fox News etc.? He used the New York Times. The Times knows they are viewed as radically anti Trump so they have to watch what they say to be accepted as credible. If they are rude and ask dumb questions Trump unloads on them and the Times looks biased and petty and Trump wins. If the Times plays it straight Trump gets his message to millions of people who would ordinarily not get his point of view. He got to dirty up Meuller and start the ground swell to get rid of Sessions.
He used the enemy media to his advantage. It was a very smart move.

Look at the tone of the NYTimes interview. It was cultured, calm. Typical of well educated people. These are Trump’s people, probably Ivy degrees. There was mutual respect in that room. They were talking as human beings.

You don’t get that with the WH press corps and all the dogs and cats that drag in there.

Minor Mystery of the Ages: Why isn’t David Gregory dishing out his “analysis” from a 6 x 9 cell that he’s sharing with a large tattooed dude named “Bubba”?

This is what people like Rag don’t get – President Trump is not the revolution against the Establishment. He is just the first wave. And one day, corrupt hacks like David Gregory are going to miss the Civility and Moderation of the Trump era.

President T-rump IS the Establishment. Always was, is today, will be tomorrow.

You keep making noises like you are Mr. Big Balls and the vanguard of some movement.

No. Not until you behave like an adult. You want to be treated with respect? Extend some and start referring to the President of the United States as PRESIDENT Trump.

Othwerise, you reveal yourself to be nothing more than a whiney little bitch that deserves to be mocked and ridiculed.

There. Now lets see you act like a NOT T-rump sucking cultist.

I know…that’ll be too hard.

I’ll await your condemnation of “whiney little bitch that deserves to be mocked and ridiculed”.

But I won’t hold my breath, hypocrite…

Here’s another mordant question I’ll get called names for asking, in the vacuum of any answer…

Why did PRESIDENT T-rump just gut his own DOJ in an interview with the NYT…???

Is this nine-dimensional chess, cultists…???

President Trump, not T-Rump. Stop behaving like an adolescent if you want to be treated like an adult.

Otherwise, you are just as silly as the Leftists on Den Underground who used an asterisk for President Bush for 8 years.

You are only discrediting yourself. It’s why people here either mock you or ignore you

You are smarter than this. If I didn’t know better, I would suspect you are a false flag op to discredit Trump critics. Do you not realize that’s all you have accomplished here?

That’s you all over, killer. What a laugher…!!!

Otherwise, you are just as silly as the Leftists on Den Underground who used an asterisk for President Bush for 8 years.

Or those like me who spell 0bama with a 0? Or those who called Clinton “Bubba” or “Slick Willy” and his wife “Lady Macbeth”? Were she now president would you refer to her respectfully? I doubt it. I know I wouldn’t. To me, ever since she moved out of the White House she’s been the Wicked Witch of Westchester, and her hypothetical return to the White House woudl not have changed that.

Hey, Killer McBigballs, cite to any instance where you took exception to by use of “Barracula” or John McAnus.

Of oourse you can’t because you are just a T-rump (PRESIDENT T-rump) sucking goon. I should call you “Moana”.

I am calling on everyone trading ugly personal insults on this thread to shut it down, now.

Next ugly comment will be met with a suspension.

It’s not all that obvious that that guy “Everyone” is the problem.

Typical. Ugly comments are only a problem for you when someone pushes back against Rag’s ugly comments. You don’t do a damn thing about it until you have the luxury of condemning “everyone”.

Like the school teacher who ignores day after day of bullying, it’s only a “problem” when the victim punches back and a scuffle ensues.

Where were you when Rag was dancing on my dead father’s grave? Staring down at your shoelaces like a coward, that’s where.

Ban away. I do not recognize your authority to demand civility. Because you are incapable of calling out one side. Because you hide behind false equivalence.

It appears we need to call a WWWWWWAAAAAAAM-bu-lance for the “victim” here.

Back to rational questions–

1. OK. How then to explain T-rump’s extended interview with the NYT?

Gregory has a point. T-rump himself sees the NYT as his path to legitimacy.

Ditto “Time” magazine. Even to the point of dummying up a fake “Time” news cover and having it slathered all over his properties.

2. If that isn’t sick, what would you define as sickness?

3. Here’s another mordant question I’ll get called names for asking, in the vacuum of any answer…

Why did PRESIDENT T-rump just gut his own DOJ in an interview with the NYT…???

4. Is this nine-dimensional chess, cultists…???