Anti-Israel activists were in the vanguard of the anti-free speech movement plaguing campuses, and still *lead* the way 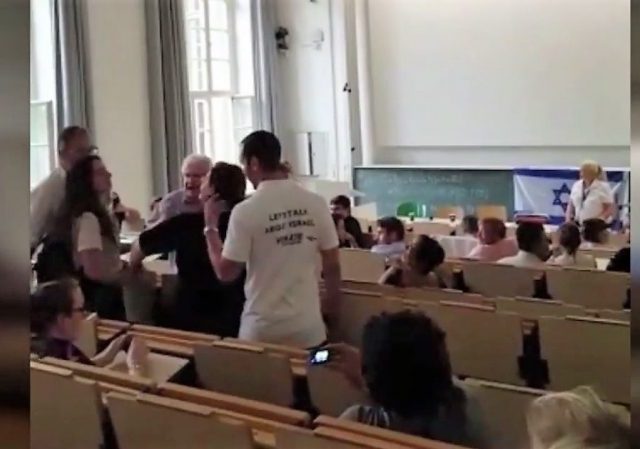 The anti-Israel Boycott, Divestment and Sanctions movement is becoming increasingly violent. We have seen this in the U.S. through frequent physical disruptions of Israel-related events.

Indeed, as I have documented many times, disruption of Israel-related events was a precursor to the more general campus intolerance we are seeing at places such as Berkeley, Middlebury, and universities in Britain and Ireland. In my post, With campus shout downs, first they came for the Jews and Israel, I provide many examples of increasing BDS violence and physical intimidation that accompanies these shout downs.

Disrupting Israel-related events is not limited to the U.S. and Britain. At Humboldt University in Berlin, a criminal complaint has been filed after an aggressive disruption.

The German-Israel society branch in Berlin lodged on Monday a criminal complaint against BDS activists for alleged violence—and disruption of an event—targeting a delegation of Israelis, including MK Aliza Lavie (Yesh Atid), at a Humboldt University podium discussion in late June.

According to the complaint obtained by the Jerusalem Post, a female BDS activist “swung wildly around her and attendees” as she was escorted from the university room for disrupting the event. She “continuously attempted to re-enter the lecture hall and pounded on the door.”

A member of the German-Israel society in Berlin and Brandenburg (DIG) positioned himself by the door to block her entry, noted the complaint.

Humboldt University security appeared after the start of disruptions to provide aid.

The incident previously was reported in the Jerusalem post on June 21, BERLIN: BDS LAUNCHES TIRADE AGAINST MK AND HOLOCAUST SURVIVOR:

Anti-Israel activists disrupted on Tuesday a talk by MK Aliza Lavie (Yesh Atid) at Humboldt University in Berlin, in what appears to be a second antisemitic attack at one of Germany’s most famous educational institutions.

The Boycott, Divestment and Sanctions activists hollered profanity and “The blood of the Gaza Strip in on your hand” and “Child murderer.”

Lavie is on a tour of German academic centers and meetings with Bundestag deputies, as well as with members of the Jewish community.
…

“This is the ugly face of the boycott industry and the BDS movement. They are not fighting for peace or rights, but against the right of the Jewish people to a national home in the State of Israel. It saddens me that Deborah, a Holocaust survivor, should have witnessed this shameful spectacle,” the MK added.

Twenty BDS activists stormed the talk, according to Lavie.

Ronnie Barkan and Majed Abusalama, two of the activists who disrupted the Humboldt event, were barred from speaking at BDS events in Oldenburg last week due to antisemitism.

The Mayor of Oldenburg Jürgen Krogmann pulled the plug on the BDS events.

Holocaust survivor Deborah Weinstein, 82, said: “They came in advance to destroy and spoil, but it will not help them. Our work is completed. Many people, even those who were not for us, came, listened and asked questions, and wanted to hear us. I am sorry for that group of violent rioters, but I am not afraid and I will continue with this work.”

This video of part of the disruption was posted by the anti-Israel activists. It does not appear to show all of the conduct at issue in the criminal complaint, such as what she did while leaving and after leaving the room.

Notice that as the woman who is shouting down the speaker was approached and pushed those trying to escort her out, one of the BDS protesters shouted “don’t beat her” “no violence.” This is a common tactic deployed when the anti-free speech, anti-Israel protesters are confronted: They falsely accuse those intervening of being violent and play victim.

Ronnie Barkan, one of the people involved, is a notorious anti-Israel Israeli leftist and BDS supporter.

Make no mistake about it, this is orchestrated by the Muslim Brotherhood and CAIR (in North America). The anarchist and hard left welcome the attention the Muslims give them. They are ignorant that the Ayatollah did the same in Iran, and hung 30,000 of them when he obtained power. There is no room for anarchists or left wingers in Islam. None.

These are the forces that civilisation has always had to fight, has always had to strive to eliminate. Fortunately I think BDS has peaked and is failing, mainly because things have changed so much in the middle east that serious people realize that Israel actually is not the big issue there anymore, and the Palestinians have become a sad, rundown little sideshow.