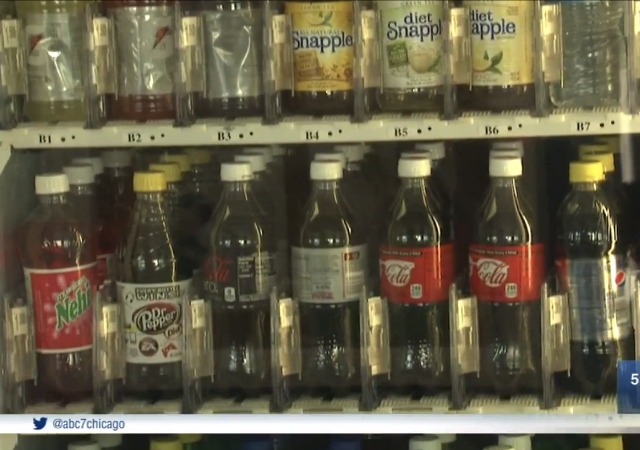 Officials in Cook County, the home of Chicago, have threatened to pass out 1,100 layoff notices since a judge delayed implementation of a soda tax.

Circuit Judge Daniel Kubasiak placed a temporary hold on the tax until at least July 21. Cook County Board President Toni Preckwinkle said this move has forced her hand to fire people.

Maybe Preckwinkle and the county should stop spending? Oh wait. This is Illinois. That’s impossible. Instead, Preckwinkle has decided to target those the public needs the most. From ABC 7:

“So if we don’t have revenue, we end up laying off doctors, nurse, prosecutors and public defenders and jail guards,” Preckwinkle said.

The sheriff’s department was told to make drastic cuts.

“We need you to cut 1,000, basically 1,000 positions from your office of 6,000. And so I don’t know any sane person who would suggest you can really function real well when you lose that many people from your office,” Cook County Sheriff Tom Dart said.

That means courthouses will likely close earlier, and policing efforts to help Chicago and suburban communities combat violence will have to be curbed at a time when they need it the most.

Here’s an interesting detail. This soda tax “would add a $0.01 per ounce tax to sodas, iced tea, sport and energy drinks and some fruit juices.” Cook County officials planned to raise $200 million in revenue in fiscal year 2018. Now they have to cut 1,100 jobs.

So that means each job is worth around $200,000 right? ABC 7 reported that public health and safety receives “87 percent of the county budget.” They did not mention if that includes the pensions former employees receive.

When the group Can The tax questioned “about cuts being greater than the amount of revenue lost from not having the tax,” the county fired back that the group is using “alternative math.” That’s not what it looks like to me. Then again, this is Illinois. Officials in that state only know how to spend.

The Illinois Retail Merchants Association filed a lawsuit to block the tax, but Kubasaik postponed the hearing until July 21 after the Cook County Department of Revenue filed a motion to dismiss the lawsuit. The Chicago Tribune reported:

“We believe it’s the county’s attempt to both try to bleed us and buy more time to try their PR campaign that the sky is falling,” Rob Karr, merchants association president, said Tuesday.

County spokesman Frank Shuftan wrote in an email Tuesday that the extension was by “mutual agreement” with the association.

“Officials in Cook County, the home of Chicago, have threatened to pass out 1,100 layoff notices”

Seems a funny word to use, “threaten.” To me, when government is reduced that’s an occasion for celebration.

Threaten is the right word. Look at who they are going to lay off; doctors, nurses, prosecutors, public defenders and jail guards.

I went to the Cook county website and I counted over 90 departments and agencies. I’m sure they could find some fat in that bloated monstrosity elsewhere. But the would rather cut muscle and make it hurt.

Like Obama closing the WW2 memorial on the mall. Liberals are hateful people.

notamemberofanyorganizedpolicital in reply to fscarn. | July 12, 2017 at 9:06 pm

Can we cut their water off now?

“Mommy where do soda jerks come from?”
“From Cook County honey.”

The Philadelphia coke-coler tax has been a disaster. It simply made people realize that they had the option to drive outside the jurisdiction to buy their groceries and grape drank. So purchases went up in adjacent areas and in the New Joisey and down in Philly. Tax revenue is down, and the marxists cannot understand why. So naturally they are trying to double down on stupid and beat people until they comply and morale improves.

Liberals always expect they can enact new taxes to raise revenue, and We The People will just roll over and pay it. They are shocked — SHOCKED! — when people adjust their behavior to avoid the tax but still get what they want.

The Seattle gun-and-ammo tax went the same way. They enacted a scheme to tax retail firearm sales at $25 per firearm and $0.05 per round of ammunition (except .22, which was “only” $0.02 per round). The tax was slated to fund “gun violence prevention” programs (yes, gun buyers were expected to pay for the efforts to erode their rights).

The result: Gun sellers in Seattle report dramatically lowered sales, and many plan (if they haven’t already) to relocate outside the city — not close their doors. Gun sellers in the surrounding county report dramatically increased sales. Overall there was no change in the number of firearms or ammunition sold, but IIRC the city barely made 1/10th of their projected revenue — not even enough to cover the cost of implementation.

It takes almost no effort to drive another mile to avoid the tax entirely, but liberals are continually flabbergasted that someone will drive that extra mile. It’s just more evidence that they have crap for brains.

The tax was slated to fund “gun violence prevention” programs (yes, gun buyers were expected to pay for the efforts to erode their rights).

Of course. The governments learned how to do it by watching the taxing of Big Tobacco. The users of an entirely legal product, taxed because that product shows a relationship with a health issue, in order to pay for efforts to stop others from using said product, thus making the product more expensive for the user paying the tax, because there is a constrained market demand from an outside force.

But the Sin-Tax never stays with the Sin-Behavior reducing cause. Inevitably the revenue “for anti-[sin] behavior” is so lucrative that it’s co-opted, and then you just have an extra segment of society taxed because the Government can.

Proof positive that these big city soda taxes aren’t enacted to discourage people from drinking unhealthy beverages. The opposite, they desperately need people to keep drinking them. They just want more money for their cronies but scream about how it’s “for the children”…

Tax and Spend. It’s the only solution the Democrats have.

And, what happens if everyone ‘adopts a healthy lifestyle’? Does the need for police go away then? Won’t they need more police just to enforce this law?

Perhaps more to the point, did their revenue projections simply assume that soda sales in Cook County wouldn’t go down due to citizens evading the tax (by stocking up when outside the County, or buying from smugglers) or even just by drinking less of it?

notamemberofanyorganizedpolicital in reply to Albigensian. | July 12, 2017 at 9:10 pm

Math is Racist don’t you know……

Tax and spend, that’s the way it works here in Crook County. Someone needs to ask the good sheriff how many payrollers he’s added to staff during his term, and how many of those people will be laid off. I think we know that answer. Instead, he’ll lay off the people who are actually supposed to be doing work because that looks more drastic on TV.

I’m not as worried about the State’s Attorney layoffs because they aren’t actually charging anyone with crimes these days. A woman threw her baby out a window and got probation. http://www.cwbchicago.com/2017/07/woman-who-tossed-her-newborn-baby-from.html

The soda tax covers sugar free drinks like diet coke which have nothing to do with obesity (or far less than full sugar drinks). This is all about revenue generation.

The name of the county is really misspelled isn’t it really ‘CROOK county’ ?

Not to worry, Friends!

Magically, each & every one will be back at work, just in time before the next election.

I wonder how much of this tax is going to be paid by people on food stamps?
Seems to me that would be taxing a taxpayer funded…..well, tax.

Actually, that’s one of the issues that the merchants are raising. Supposedly by law food stamp recipients are supposed to be exempt from this “sweetened beverage” tax (which conveniently includes diet stuff as well, so forget about the “let’s get people to lay off the sugary drinks” canard). Also, according to Illinois law (for what it’s worth, not that our politicians give a flying fig about law anyhow) it’s illegal to tax a tax, and there are issues about being able to apply this money-grab law uniformly. The judge put things on hold until July 21, so expect the brains in Crook County to come up with a workaround in their ongoing efforts to treat taxpayers like living, breathing ATMs.

Never mind the larger question about why items like pop and candy are covered by food stamps, and thus subsidized by taxpaying citizens like yours truly. People on food stamps can afford to eat better than I can, I swear.

Soda taxes just a foot in the door. The big prize is to eventually tax sugar in any foods, because “obesity” and “Health”

Maybe that will relieve the County of the $11.5 million in “anti-violence” grants.

What a joke. This is just more political theatre, just like the ‘Barry-cades’ a few years ago when the government was ‘shutdown’.

Democrats are absolutely terrified that if a shutdown happens and nobody notices people will realize how little they need a lot of government.

So they intentionally FORCE them to feel the pain as much as possible.

It was illustrated perfectly a few years ago by I think Rush Limbaugh:

Lets say there’s dual-function government department that has half of its budget dedicated to feeding starving children, and half of it to building gold-plated statues. Now say they have their budget cut by 50%. Any rational person looking at the functions would stop building statues and feed children (or a case could be made to reduce both by half).

Nope. Government under Democrats would dedicate 100% of their remaining budget to building gold statues, stop feeding starving children entirely, and go on liberal media and talk shows screaming about how the evil Republicans wanted children to starve until they got their budget restored.

This is another perfect example. They’re losing a source of revenue. A RATIONAL person would find departments that are not needed or not critical and make cuts.

Nope. Democrats in Illinois are intentionally laying off from the courts and sheriff’s department.

Unless those 1100 employees were hired AFTER the soda tax was supposed to go into effect, there is no rational reason they should be the ones laid off.

In conclusion, Democrats are lying scum that will stamp their feat and pitch temper tantrums if they are ever in danger of being forced to reduce the size of government.