Fmr NY Observer Editor: “the press has assigned itself the chore of undoing the results of this election, which they simply don’t accept” 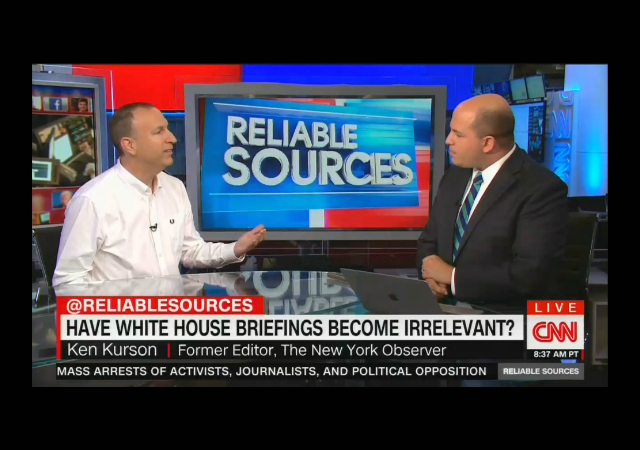 On CNN’s Reliable Sources today, Ken Kurson, the former editor-in-chief of the New York Observer, owned by the Kushner family, calmly laid out a damning indictment of the mainstream media in the age of Trump.

Pursuant to Kurson’s bill of particulars:

Host Brian Stelter pushed back feebly, claiming that it’s just “opinion” columnists who are attacking the Trump admin. Does Stelter ever watch any of the coverage by the ostensibly objective hosts and reporters on his own network?

KEN KURSON: So the idea here is that the media has become the opposition to Trump. Just listening to the intro to this show, listening to Fareed’s show before it, it’s no longer that the Republican point of view holds forth, and the Democrats hold them accountable, and the media covers it. It’s that the president and the White House put forth their point of view, the media argues with them, and the Democrats have become totally irrelevant to that discussion. It’s a stunning thing to watch unfold during this presidency.

BRIAN STELTER: About the irrelevancy of the Democratic party?

KURSON: Totally! And the way the press has assigned itself the chore of undoing the results of this election, which they simply don’t accept. And I think the shame of it is, we no longer have even a two-party system, which many think is too few. We have a one-party system, and the media as the other party.

STELTER: Where do you go from that to, the media is the opposition.

KURSON: Because when I look at the tone, and the way these attacks are launched, and I’ve cited a couple of examples for you, or the way that whenever there’s a need for the appearance of balance, NPR will hire some conservative who hates the president. Or the New York Times will go get Bret Stephens, whose main contribution is that he hates the president.

Whenever there’s the need for the appearance of fairness, there’s no real effort to — where are the pro-Trump journalists in the mainstream media? They don’t exist! Because the entire mainstream media is against Trump. And that I think is not just bad for American policy. I think it’s bad for journalism.

STELTER: I think a lot of journalists are against lying, are against deceit. That’s where we are right now.

KURSON: I’m against lying and deceit. I think the function of the journalist to hold the administration accountable is a critical function enshrined in our Bill of Rights. But when you have a system where the most outrageous attack is what’s rewarded with likes on Facebook and followings on Twitter, you’re setting yourself up —

STELTER: I think a lot of journalists are against lying, are against deceit. That’s where we are right now.

Y’all didn’t seem to have a problem with it when the Democrats were in control.

The press is also, as a religious/moral/ethical/legal/etc. orientation, overwhelmingly Pro-Choice, selective and opportunistic, and Democratic.

They made a mistake and included the word ‘against’.

The journalists are the liars.

No longer just the MSM, or even the Drive-By Media. They are fully the DemSM(tm)

A Watergate-style coup to entrap the president. So far, Trump has not taken the bait, but the press persists with the baby hunt.

STELTER: “I think a lot of journalists are against lying, are against deceit. That’s where we are right now.”

Selective outrage! Everyday the media spins, distorts, lies and uses deceit against the Trump administration and anyone who voted for President Trump. Stelter is nothing but a cheerleader for the “Resistance”.

He just doesn’t happen to be one of them. Journalists or just regular people should be against lying and deceit. If you aren’t who are you to attack others?