Avlon: “The only thing that unites [Trump’s] coalition right now seems to be hatred of Hillary Clinton” 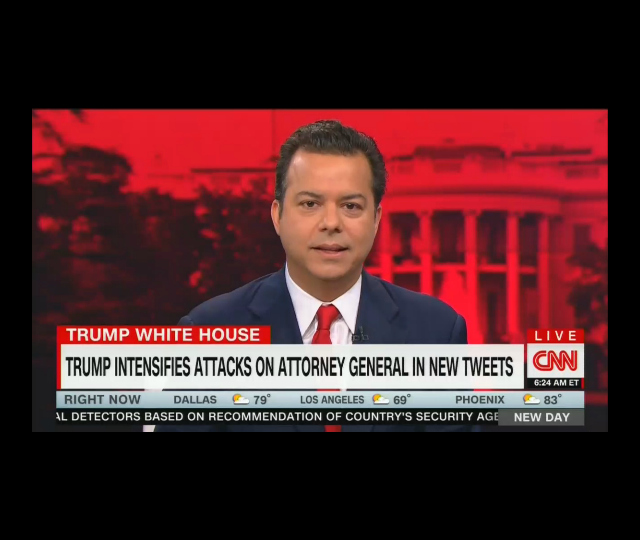 On CNN this morning, Daily Beast editor-in-chief and CNN analyst John Avlon said that President Trump is “trying to back channel the Saturday Night Massacre.” That was a reference to the episode during the Watergate investigation in which President Nixon ordered the firing of special prosecutor Archibald Cox, leading to the resignations of the Attorney General and Deputy Attorney General, who refused to carry out Nixon’s order.

Avlon painted a scenario in which, under pressure from President Trump, Sessions resigns. Trump would then appoint a new attorney general who would declare himself capable of carrying out the Russia investigation, cast the investigation by special counsel Robert Mueller as a “terrible distraction,” and presumably fire him.

JOHN AVLON: Look, he’s trying to back channel the Saturday night massacre, that’s what’s happening. If Sessions resigns, then you appoint someone else who then assumes power —

AVLON: — and says the special counsel thing is really a terrible distraction and as Chris said, you know, I’m going to be in a position to investigate more effectively because I’m not directly connected with the campaign, depending on who it is. And that’s the larger game here.

It’s also about repeated attempts, you know, he goes after the independent journalists, and independent judiciary consistently, because those are forces that can constrain and hold presidential power accountable and that’s why this all demands our attention. And the Hillary Clinton stuff is simply because the only thing that unites his coalition right now seems to be hatred of Hillary Clinton. It’s a Golden Oldies station.

Note: Avlon also claimed that hatred of Hillary Clinton is “the only thing that unites [Trump’s] coalition right now.” He was the second CNNer to take a swipe at the Trump base. Earlier, David Gregory said that a large part of “Trump nation” is the “nativist right.” Nativist is a term understood on the left as the equivalent of racist, as explained  here.

Note: President Trump does continue to criticize Sessions, as in his tweet of this morning.

Avlon painted a scenario in which, under pressure from President Trump, Sessions resigns. Trump would then appoint a new attorney general who would declare himself capable of carrying out the Russia investigation, cast the investigation by special counsel Robert Mueller as a “terrible distraction,” and presumably fire him.

And the problem with that would be…

Other than losing Sessions this sounds pretty good to me. Sessions was not weak, he had no choice but to recuse himself, and nor would any other AG who’d been involved in the campaign. If Trump had wanted an AG who would run the investigation himself he should have chosen someone who had not lifted a finger to get him elected. That Trump does not understand this speaks volumes about him, but it doesn’t make the Russia nonsense any stronger, or Mueller’s fishing trip any more legitimate.

“Sessions was not weak, he had no choice but to recuse himself, and nor would any other AG who’d been involved in the campaign.”

I’ll direct to to what Andrew McCarthy wrote in NRO on the matter. He spells it out better than I could in this short space.

Secondly, there was no known ‘Russian collusion investigation’ at the time Trump nominated Sessions.

Thirdly, Rosenstein appointed Mueller to investigate Trump at the same time Comey was telling Trump and Congress that Trump was not under investigation.

Yep. You rarely go wrong with Andy McCarthy’s take on such things.

If you’re such a fan of McCarthy, see whom he blames for this mess.

Yes, he thinks the recusal wasn’t necessary; maybe he’s right, but the DOJ ethics people disagreed, and would have given the same advice to whomever Trump appointed. For that matter, Sessions’s own legal opinion is more relevant than McCarthy’s, and he believed himself covered by the regulation.

No, Rosenstein did not appoint Mueller to investigate Trump; he appointed him to investigate the campaign. That is the key point that both you and the news media keep ignoring. Comey correctly told Trump he was not personally a target; there were no individual targets, though if a crime were discovered then whoever did it would become a target.

That is the key point that both you and the news media keep ignoring.

As has been pointed out before, we still don’t know exactly what Mueller is investigating. The Press, the liberals, the Dems, and the anti-Trump contingent make claims about it, but so far all seem to be based on their dearest fantasies. Actually, all are without foundation. And the Right reacts with paranoia, gloom and doom, all also without foundation.

“And the Right reacts with paranoia, gloom and doom, all also without foundation…”

Well, that’s the idea, isn’t it? But the ‘right’ is not a monolith. The GOPe is also considered the ‘right.’ And of course, those rats can be counted on to react with paranoia, gloom and doom, all also without foundation. Speaking of which: McCain is back.

You state that Mueller was appointed to investigate the campaign, so if he goes off the reservation by issuing subpoena’s for Trump business records would that provide PDT with a reason to fire him?

Also, what of McCarthy’s proposition that a special counsel is only supposed to be appointed to investigate possible criminal charges, and not to do a counterintelligence investigation?

Sessions had a choice but supposedly the recommendations from ethics and legal experts were to recuse himself. He might have thought that his reclusal would lessen the Russia, Russia, Russia screaming, but he also may have thought that his senate friends would go easy on him. Sometimes it is better to just do what you believe is right and take the lumps and be fired as I well know.

That Trump does not understand this speaks volumes about him

The fact that you still have little grasp of Trump’s tactics also speaks volumes.

Does a man who issues simple statements have only simple thoughts, or is he tailoring his statements for simple targets?

Okay so I like to read Andrew McCarthy’s take on these things.

Sessions lost me when he came out in favor of expanded civil forfeiture. Now I think of him as just another big-government man from an older generation, whose time really has passed.

In a way, I think Avlon is *almost* correct, but he doesn’t understand what’s going on enough to be correct.

But they are just stand-in’s, just puppets – it is the Left that is actually hated. And that’s what Avlon and Cilliza can never grasp.

I’m not sure I would go so far as to say that the only thing that unites Trump’s coalition is the hatred of Hillary. It amazes me that people still don’t understand what got the loud-mouth (especially Twitter)elected. A common desire to take a new direction in reducing the size of government (especially regulation), address the border with Mexico, and stand up for the United States with the rest of the world, especially the middle east terrorists (Not the peaceful muslims) and N Korea. The economy was a part of it, but not all of it. None of these underlying motivators have changed.

Hillary was weak, but mostly she was seen as more of the same old politics as usual in DC.

1 – Isn’t there supposed to be the suspicion that a crime “may” have been committed prior the the appointment of a special counsel?
2 – If someone were given unlimited scope, an unlimited budget, unlimited staff, and unlimited time they’d be able to find whatever they want? Why has Mueller been given all of these things? If I recall Ken Starr had to go to a judge to be given permission to go in different directions.
3 – My opinion is that all of the data dug up on Trump will be handed over to the DNC in the summer of 2020 for their use because that is what this is all about.
4 – Like him or not, if this continues unabated, it is the beginning of the end for our country.

Lavrentiy Beria, head of Joseph Stalin’s secret police in the old Soviet Union, supposedly said, “Show me the man, and I’ll show you the crime.” This is the path that the Democrats are taking with Trump and his Administration and maybe even that taken by Mueller since there is no crime for him to investigate. So they are using Soviet Communist style methodology to try and destroy Trump. If this can be used against Trump, and it is, what about the next Democrat president.

But nobody will use the tactic on the next Democratic president. For all practical purposes, Lavrentiy Beria is a Democrat. There don’t seem to be any Republican or Independent equivalents; nor are any likely to appear.

(Well strictly, Beria’s dead and a foreigner … but that doesn’t preventing him from voting Democrat.)

(Well strictly, Beria’s dead and a foreigner … but that doesn’t preventing him from voting Democrat.)

vote without IDs means vote as many times and as many districts as necessary to win.

Walk up to someone and repeatedly kick that person in the shins for 30 minutes straight, shouting obscenities and spittle-spewing hatred all the while and then – SURPRISE! – express shock when the person gets a bit irate and complains at the unprovoked, ill treatment.

More closely resembles the Terrible Twos temper tantrums parents down through the ages have had to endure.

Yet another case of what the left accuses others of is what they are doing themselves.

“Avlon: “The only thing that unites [Trump’s] coalition right now seems to be hatred of Hillary Clinton…”

Avlon: include the likes of you in that ‘thing’ that unites Trump’s coalition.

Hillary clinton is no longer important enough to ‘hate. She is now just a flea. But she does serve but one very important purpose in remaining alive: to see her publicly pay heavily for her crimes. If she doesn’t, a criminal and traitorous monolith of the likes her and her ‘husband’ will soon rise again.