Charlie Gard’s Parents Will End Legal Fight to Take Him to the U.S.

Charlie Gard’s Parents Will End Legal Fight to Take Him to the U.S.

“I only wanted to give him a chance at life.” 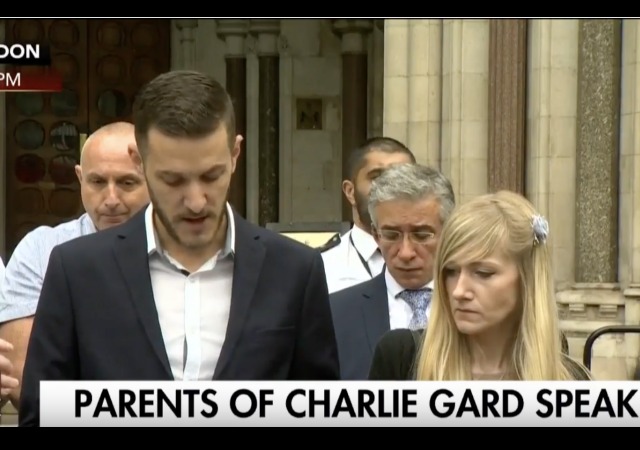 Terminally ill baby Charlie Gard has captured the hearts of everyone across the world as his parents have fought tooth and nail against bureaucracy to do what they can to save their child. But now the parents have decided to end the legal fight. From Fox News:

“As Charlie’s devoted and loving parents we have decided that it’s no longer in Charlie’s best interests to pursue treatment and we will let our son go and bewith the angels,” Yates said in court.

The couple was expected to present new evidence in court on Monday, but they arrived in court to say the dragged out case has wasted “time. A whole lot of wasted time.”

In late June, the European Court of Human Rights caused international outrage when the judges decided to side with British courts to remove life support for 10-month-old Charlie Gard, refusing to allow his parents to take him to America for trial therapy, even though they raised more than $1 million for it.

Gard suffers from mitochondrial DNA depletion syndrome, a rare genetic condition, which has caused brain damage
and he cannot breathe on his own.

On Friday, the couple received the results of Charlie’s latest test results:

The British parents of critically ill baby Charlie Gard have been told by a hospital lawyer that the results of their son’s latest brain scans make for “sad reading.”

Charlie’s father, Chris Gard, yelled “Evil!” at Gollop as his mother, Connie Yates, began to cry. The parents said at the hearing it was the first time they were being told about the latest results in the crucial test of Charlie’s brain function.

The test results infuriated the parents because they believe if they had been able to give Charlie treatment the results would have shown something different. From The Daily Mail:

They are furious because when they began fighting for Charlie to have the experimental therapy, he was not brain-damaged, according to a family source.

‘The sad fact is the scans taken before the court hearing in April did not show irreversible brain damage. This is why the parents fought so hard. They should have been trusted,’ the source said.

‘If anyone thinks the parents were deluded, and simply could not accept the diagnosis, they are wrong. Charlie was not a hopeless case. There was no brain damage. He should have been treated.
‘As the court heard, he was a relatively normal little boy.’

Charlie’s mother Connie hinted at this as she delivered her statement:

“Had Charlie been given the treatment sooner he would have had the potential to be a normal, healthy little boy,” Yates said, referencing the recent medical test that ultimately led to the couple’s decision to withdraw.

“I only wanted to give him a chance at life,” Yates said. “We will always know in our hearts that we did the very best for Charlie and I hope that he is proud of us for fighting his corner.”

“There has never been any proof that he was and we still don’t think that he’s in pain or suffering to this day,” Yates said in court on Monday.

“Having said that, we have decided to let our son go and that’s for one reason and one reason only. It is because the prospect of improvement is unfortunately now too low for Charlie,” she added.

The parents have decided to donate the money they raised “would be donated to help other children with similar genetic conditions.”

I firmly believe that those “courts” deciding on the death of an innocent life because its just too expensive and medical experts say nothing can be done when clearly something could have been done, will have to answer for this decision to the ultimate Judge. This is the beginning of an Orwellian dream for the Left.

This happens everyday in all the counties with socialized healthcare! To old, to young or to exspensive…gotta go!

Sadly, this happens every single day right here in the USA too. Remember Terry Schiavo, the Florida woman who was starved & dehydrated to death by court order? Or the young woman kidnapped by Boston Children’s Hospital because they didn’t like the treatment prescribed at Tufts?

That sad, my heart goes out to these parents.

…and at VA hospitals all over the US. It is no mistake that many veterans are not getting seen, are delayed in getting treatment, or are just given pain killers (usually addictive oxycodone, or OxyContin) until they just “go” and “unburden” “the system.”

Disgusting beyond words. It is NOT “health care;” IT IS MANAGED EUTHANASIA. IMHO, of course……

What I did not understand – the courts blocked the experimental treatment, saying it would not help Charlie. Maybe not, but it could help another child with the same problem. Parents of ill and dying children in the USA make that decision every day – to use the experimental treatments on their own children in hopes of a cure for their child AND/OR to help other families to not go through what they are. Why did the court not allow it for that reason?

If Charlie Gard had reached America and somehow survived he would have made Socialized Medicine look inferior in front of the entire West. The system had used up all its options. Therefore, no others could be considered and he had to die.

Call it Socialist or Progressive – it’s just a shiny new name for the same old thing. By their very nature Marxism and Communism must logically end the same way every time they’re tried: with those deemed superior deciding who deserves to live and who deserves to die.

Not just that… if it had worked, parents in the UK would have demanded experimental treatments for their children. There are very few medical innovations coming from countries with socialized medicine. It’s too expensive so they all depend on the USA to lead the field. Without medical innovation in the USA. lifespans would be shorter in Europe. They reap the benefits of our system while criticizing it at the same time.

It wouldn’t surprise Kevin the least if the hospitals and courts further toes in even deeper because they felt giving way now would be good PR for Trump.

In the UK the parents don’t have near the rights that we have here. As one example, if a child is removed by social services the parents are completely prohibited from even revealing that it has happened, never mind telling their side of the story – something that has led to innumerable abuses.

The parents had raised the money to have the treatment, about $1 million.

So, it wasn’t money.

It’s getting bad here in the U.S.A. too, but not as bad yet. I hope the Gards move to the U.S.A. so the can control the medical care of their next child.

We’re hearing from the parents, we’re hearing from courts and lawyers. But we’re not hearing much from anyone who might have even the slightest idea of what young Mr. Gard’s situation really is … and those would be medical researchers. They’re certainly not the last word—actually, they tend to be grossly optimistic—but everybody else’s opinions are mere noise.

Here, although they did have a medical prognosis, it was presented by a lawyer, which seems … odd, and not particularly reassuring.

In any case, the big question raised here has nothing to do with socialized medicine; it will be an increasingly large factor in any health-care system. Terminal care can suck up unlimited amounts of money and resources. Even in the normal everyday case, occurring millions of times every year, the costs of the final months of life consume more time, effort and money than the rest of an entire lifetime. It’s a problem now, and will likely get far worse in future, no matter how badly Congress bungles our insurance arrangements.

Ummm … and speaking as an old New England skinflint, I think if I’d donated money to fund a particular rescue … after that rescue didn’t happen, I’d prefer to get the money back, rather than have someone else decide what to do with it.

This is everything that is wrong with single payer, right here. It’s one thing to say we won’t pay for a treatment. It’s quite another thing entirely to say that YOU can’t pay for your own treatment. Single payer = single decider = death panel.

More and more Brits, those who can afford it, are returning to the private sector health care market purchasing their own medical insurance and using non-NHS hospitals.

Casts a light on the mechanics of Choice at the twilight fringe exercised by a minority in a monopoly (e.g. single-payer) state.

Extraordinary woman and man, mother and father, who defied the secular faith, with hope to change the outcome of evolution and anthropogenic selection. A struggle that motivates the positive progress of humanity.