This is really about creating new voters for Democrats. 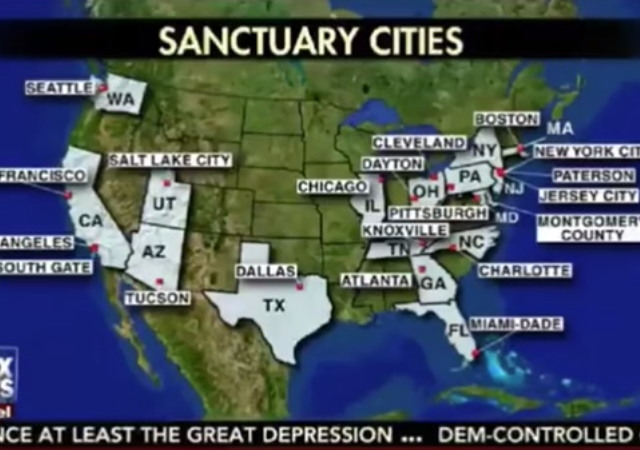 The left is falling back on one of its favorite strategies. A group called “Naturalize Now” is planning to create a million new citizens in a year. Why bother trying to appeal to voters when you can just create new ones?

The “Naturalize NOW!” campaign, which includes liberal and progressive groups and elected officials, heralded the mayors of the cities in joining the national effort.

Many are sanctuary cities and counties…

According to Naturalize Now!, more immigrants than ever have applied for U.S. citizenship, a spike coming at a time when the Trump administration is warning all illegal immigrants about deportation.

The story got a quick mention om FOX News:

This is how “Naturalize Now” describes itself on its website:

The Naturalize NOW campaign encourages eligible legal permanent residents to seek out the best protection against deportation and take the first step in participating in America’s democracy by becoming a U.S. citizen through over 150 application assistance events being held across the country throughout the summer.

The overall goal of the Naturalize NOW campaign is to move 1,000,000 people to apply for citizenship in 2017. Across the country, 8.8 million people are eligible to naturalize but haven’t done so yet. 3.7 million of them could become citizens for free or for a reduced cost, using available fee waivers.

Their home page features a video message from Los Angeles Mayor Eric Garcetti. Here’s a partial transcript of his message, via Paul Bedard:

“We celebrate our independence on July 4, and honor the values of freedom, justice, unity, and equality that make us who we are,” said Los Angeles Mayor Eric Garcetti. “Los Angeles joined the Naturalize NOW campaign because those principles are still worth fighting for — and to encourage eligible Angelenos and people across the country to seek a path toward citizenship and join the American family.”

Garcetti does his best to make this sound like it’s all about America’s highest principles but that’s nothing more than dressing. This is a voter registration drive intended to help Democrats. Plain and simple.

Simple fix, make illegal entry into the US a felony. Lets see how much money the Dem’s are willing to give to felons who can’t vote.

notamemberofanyorganizedpolicital in reply to scaulen. | July 6, 2017 at 2:29 pm

But isn’t it so nice of “Naturalize NOW”
to concentrate all the illegal aliens
into camps so they can be
immediately and permanently deported NOW!

That’s why Democrats push for allowing felons to vote, and they’ve succeeded in some states.

Yeah, that’s just what we need: 3.7 million new citizens who are so poor they can’t even afford the fee for the citizenship application.

My friends are doing it legally and paying a huge amount to do so. Now they will simply walk in?

What do you mean “simply walk in”? These people are exactly the same as your friends. They’re doing it legally just like your friends. If your friends can’t afford the fees they can get the same discounts or waivers.

The synergy with the push for polygamy rights should be obvious.

If they are legal permanent residents, why would they need protection against deportation?

If they should ever commit a crime.

notamemberofanyorganizedpolicital in reply to Milhouse. | July 6, 2017 at 2:30 pm

Being here illegally is a crime…….

Milhouse in reply to notamemberofanyorganizedpolicital. | July 7, 2017 at 2:52 am

What the **** are you talking about? They’re not here illegally.

until they get a ‘free get out of jail card’ –
even Regan gave them one.
I’ts for the chi’un, doncha know.

notamemberofanyorganizedpolicital in reply to 4th armored div. | July 6, 2017 at 2:34 pm

Democrats got to molest more children……….

When the Democrats have given away all our wealth, freedom, rule of law what will happen? We will gaze longingly at Cuba and Venezuela as Paradise Lost and wish we could live there.

time to fight for the new voters and educate them about what a republic means.
just watch out for the jihadists.

I don’t think they pay a lot of attention – Legal immigrants are not terribly sympathetic to queue-jumpers, so urging the legals to naturalize isn’t going to get more pro-illegal voters on the rolls.

This is really a positive thing.

This is following the law, instead of defying the law.

Illegals can’t get “legal” by any means. This whole initiative only contemplates legal residents applying for citizenship via the existing process.

It won’t do a whole lot, because there are reasons they have NOT made the move to become citizens for any of a number of reasons that are not addressed by this push.

Could any of you down-thumbing “thinkers” articulate any problem with what I said, or is it all just tribal hate with you?

You made your own bed, rags.

Perhaps it’s a commentary on some other aspect of your LI persona?

Yep. As I intuited. Just T-rump suckers hating on me without any reason associated with my comment.

Or it could be that someone who spends his time insulting people on LI has earned their enmity. If you dish it out…

You might check with a dermatologist. Skin that thin could be cancerous.

But see you have called me a coward, a traitor, various flavors of hypocrite… Just to name a few.

No, all the hate is because I won’t suck your T-rump idol.

And you know it!

And now, the award for Best Performance as a Victim on an Internet Forum.

This award is presented to the postor who claims victim status for consequences resulting from his own actions.

You literally cannot not lie.

I can’t think of the last time I provoked an exchange with you, but I CAN provide numerous examples of where you’ve trolled me. Lately. If you say otherwise, I’ll just prove you are lying. Again.

My skin is so thick, you haven’t (and will never) even bruise it, T-rump sucker. I laugh at you Stalinist ThoughtPolicing goons!

‘VaGentleman, I haven’t kicked you in the balls lately so you should just shut up about it.’

I’m only 1 of the many downers you get. You kicked a lot of people, and continue to do so, but I guess that’s all my fault too.

Just like your girl friend, Hillary, it’s never your fault. You really are a child.

Grab what tiny balls have and run to mommy.

“example of following the law…” isn’t that what the Constitution is – as it’s being followed by the President.

What law are you referring to?

Immigration and naturalization law. Is this a thunderclap for you…???

And, since citizenship is a federal function, and not dependent on state or local officials or activists no matter how treacherous, it has little chance of major success.

In fact, it seems like a poor PR move; declaring intent to turn the country into some other country implies that they’re afraid something is about to happen which will wreck the normal cancerous growth of their program, and that it’s time for a Hail Mary.

notamemberofanyorganizedpolicital in reply to tom swift. | July 6, 2017 at 2:36 pm

Isn’t it nice of “Naturalize NOW” to pinpoint
all the evil cities we should boycott!

Illegals are encouraged to flock to states that have sanctuaries for the purpose of inflating the total population of the state. The 14th Amendment provides in part

Representatives shall be apportioned among the several States according to their respective numbers, counting the whole number of persons in each State.

Accordingly, the total number of seats each state is entitled to in the House of Representatives is determined solely by such state’s total population irrespective of citizenship or immigration status. Adding migrants, refugees and illegals with large extended families prior to the next census will conflate the total population in sanctuary states.

The plan is clear, increase population of blue states to increase blue states’ representation in the House and ensure those newly created seats become blue by strongly encouraging the new citizens vote democrat.

I’m all for legal, naturalized US citizens, but what is this ‘protection against deportation’ crap??

Legal permanent residents are just that: Legal. Permanent. Residents. Unless they screw it up with criminal convictions, etc.

We hear often from people here that you can be criminalized for pretty much nothing (which has SOME merit, since we live in such an over-regulated environment) along with the chant that “law is dead”.

Unless they screw it up with criminal convictions, etc.

Since you clearly know legal permanent residents are at risk of deportation, what is your question? Naturalization protects them from this risk.

Not in every case. While rare, they can still be deported.

A naturalized citizen can be deported? Barring fraud in their naturalization process, I can’t think of any condition that would obtain.

Can Congress do something about this?

Probably not. We have states being that hostile toward the illegal immigration policy.

Honey, dear, there’s nothing about ILLEGALS in this story. What are you reading?