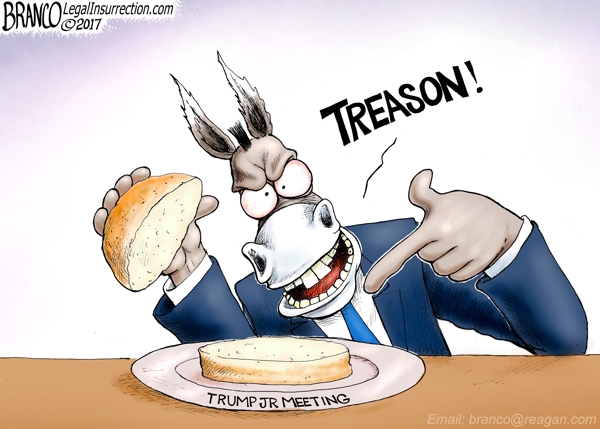 Exactly what I was thinking. Funny and frightening at the same time.

The donkey (or ass is) a good mascot for the Dems, because they are the party of Abortion, Sodomy, and Statism.

I got a fundraising letter from Paul Ryan, asking for civility. I told him he was asking the wrong party.

Goody two-shoes Ryan prances around being civil, but accomplishing nothing other than depriving Americans of the legislation promised by Trump. I have no civil feelings for Ryan.

notamemberofanyorganizedpolicital in reply to Valerie. | July 13, 2017 at 8:44 pm

Civility is only for when you’re working with civilized peoples – not Democrats!

Whats even funnier about this whole saga is how by going after Donald jr the media has inadvertently shone a light on the swamp and their dealings with these same Russians.

Why I imagine there are one or two out there who actually managed to get some neurones firing in their head and asked themselves if this is such a problem for Trump why isn’t this a problem for Democrats and swamp ring’s?

Dare I even go as far to say that some people MAY even have changed sides because of the double standards from the media on this topic.

Antonio, I applaud the way you have captured the essence of Maxine Waters without inflicting her image upon us.

Now that you mention it….. uncanny!