“By Any Means Necessary” 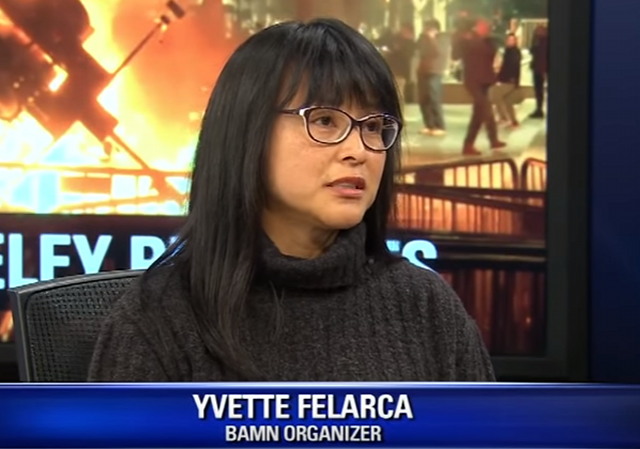 Yvette Felarca, leader of the Antifa organization BAMN (By Any Means Necessary) has been arrested for inciting a riot. The charge stems from an incident in Sacramento last year.

Yvette Felarca, the controversial Berkeley middle school teacher who frequently marches and protests against groups she considers to be fascistic, was arrested Tuesday night in connection with a violent neo-Nazi rally in Sacramento in June 2016.

Police took Felarca, 47, into custody in Southern California on charges of assault by means of force likely to inflict great bodily injury, a felony, and participating in a riot, and inciting a riot, both misdemeanors, according to information provided by the Sacramento County District Attorney’s office.

Felarca was captured on video hitting a member of the Traditionalist Worker’s Party, a white nationalist group that had taken out permits for a rally on the west steps of the state capitol. Felarca, a member of the group By Any Means Necessary, and other counter-protesters blocked the rally by chasing and hitting and even stabbing members of the Traditional Worker’s Party.

Felarca was filmed calling a man a Nazi, and punching him in the stomach repeatedly while shouting for him to “get the fuck off our streets.”

The Daily Californian has more:

Berkeley Unified School District teacher and activist Yvette Felarca was arrested Tuesday for her involvement in a faceoff between white nationalist groups and counter-protesters last June in Sacramento.

She was arrested on charges of assault by means of force likely to inflict great bodily injury, participating in a riot and inciting a riot, according to the Sacramento County District Attorney’s Office.

Felarca denies the charges, according to this Associated Press report in the Washington Post:

The attorney for a prominent San Francisco Bay Area anti-fascist leader is denying that her client committed assault or incited a riot that led to more than a dozen injuries at California’s state Capitol last year.

Felarca is a spokeswoman for the group By Any Means Necessary. Driver is the group’s national director.

Felarca, who commonly calls herself Yvette, is one of four people facing Sacramento County charges from the brawl between white nationalist groups and counter-protesters.

She can be seen pretty clearly punching a man repeatedly in this video of the incident:

Felarca was also directly involved with the violent mob which shut down a speech by Milo Yiannopoulos at Berkeley in February. She defended her actions on the Tucker Carlson show, which we covered in an earlier post:

She also appeared on KTVU News where she encouraged more “militant” protests from the left:

Will the media ask any prominent Democrats to comment on this? Just kidding.

Her naked accusation, “He’s a fascist,” or “He’s a Nazi,” enables her, in her self-justifying mind, to unleash any manner of mayhem on said target. And that she should be permitted to do this just because she made that initial determination.

She of course pulled that stunt on Milos; she was a prime instigator of the Feb2017 riot at Berkeley.

But since when did the mere being a fascist or a Nazi or a Commie become a criminal act (setting aside the entire issue of her self-help)? A state of being is sufficient cause to act in “self-defense” (SD is one of her claims)? Not the state of the law as far as I know.

Is a felony assault conviction a disqualifying factor for being a teacher in the People’s Democratic Republic of California? The best outcome would be one where she no longer gets to indoctrinate people with her insanity.

They would likely view it as a positive job qualification there …

This lunatic is teaching children? God help us!

I sincerely hope she spends some time in the clink.

Middle school teachers have sure changed since I was in junior high.

I did not see the misogynist card, racist card (that is always in play regardless of logic), or other victim cards except for the “political” card. Leftists are always the bullies (reality) or the victims of bullies (narrative).

The orange jump suit is the uniform of the left. Or it should be.

no wonder that the education system in the US sux, but then again it’s kalifornia.

It was when California was a part of America, and America was still America.

I remember those days, but my long term memory is above average.

I went to elementary school in Orange, CA in ’62-’63. Learned to read via phonetics, practiced ‘duck and cover’, and rooted for and against Pat Brown and Richard Nixon during the ’62 governor’s race – we didn’t know who to support and back then the teachers didn’t indulge in indoctrination. But I remember being able to wear jeans to school which wasn’t allowed back east.

“But I remember being able to wear jeans to school which wasn’t allowed back east.”

I too learned to read puh-honically. I found a book in an alley in Puh-honix Arizona. Except the compact disc that comes with it was missing.

(In ASL fingerspelling is received phonetically. I was constantly messed up over the same things repeatedly, “st” abbreviation for ‘street” and also for “saint” so that something comes in as stbenard for a dog or benardst for a location. Phonetics is essential, but it does have its ridiculous problems.)

Those days ceased to exist before I was born. (I’m almost 40).

She’s one of four arrested — were the other three from the other side? Is she the token so the police and prosecutors can pretend to be viewpoint-neutral when the juries let her off and convict the “white nationalists”?

Does she think the Trump administration has undue influence over the actions of the Sacramento County District Attorney’s office in a State like Kalifornia?

I was wondering that too, but I found that county DA Anne Marie Schubert is a Republican. (And a lesbian, which might make her more likely to be pro-Trump.)

There is something appalling in someone insisting they didn’t do what they are shown on video tape doing. Are we really supposed to be that stupid? Maybe their followers are, well mostly their followers are but the rest of us are not.

Just me but I would always tend to distrust and keep away from a group seeking to get what the want “by any means necessary.” Violence looking for a time and place to happen in my opinion.

Video evidence never stopped apologists for Arab terror in Israel; why should it stop her? I guess that’s what they mean by intersectionality.

What ? You didn’t see that vicious neo-nazi attacking that poor girl’s fists with his stomach ?

Somehow “By Any Means Necessary” always makes me think of the scene in Orwell’s “1984” where O’Brien asks Winston what he’s willing to do to further the cause:

“If, for example, it would somehow serve our interests to throw sulphuric acid in a child’s face — are you prepared to do that?”

And Winston, to his eternal shame, answers “Yes.”

How can anyone even pretend to hold the moral high ground after adopting a name like that?

“How can anyone even pretend to hold the moral high ground after adopting a name like that?”

Good question. I think it is due to the “ends justify the means” practical philosophy which can be used to justify evil. Basing one’s actions on universal moral principles that respect individuals does not work for these people.

I’m dismayed these are only misdemeanors.
People stabbed? Buildings set on fire?

Michelle Carter was convicted of involuntary manslaughter on June 16 for sending her boyfriend text messages encouraging him to commit suicide. Her boyfriend, Conrad Roy III, killed himself on July 12, 2014. – http://wapo.st/2ryxx9E

We here in California hate crime, and we are doing all we can to irradiate it.
Arrests are way down!
We are employing a standard progressive method to accomplish this: We just change the definitions. Below is an outline of our most recent leap forward in the fight against crime. We are not done yet.
http://www.kcra.com/article/california-crime-measure-triggers-52-000-fewer-arrests/6430174

The incidents were over a year ago. Law enforcement is being very … well, “deliberative” is a mild word for it.

Awesome.
Keep chipping away at these Antifa goons.

So if you are a violent leftist, the term “prominent” applies? Has “prominent” EVER applied to anyone on the reasonable right?

I saw her interview on the Tucker Carlson show a few months ago–she was truly frightening.

Why can’t Trump target these terrorists and their enablers in political office and universities the same way the KKK and the Jim Crow politicians who supported them?

In her mind, it is all justified, because we are “Nazi’s” we deserve all the bad things that happen to us.we deserve the beatings, the harassment’s, the hounding of us at our jobs the total destruction of our way of life. It is this mindset that will cause genocide or in our case civil war when the left try to show that their opponents are “sub” human and deserve all the bad things because they are “Nazi’s” This will not end well unless there is a handle on this.