However, many climate scientists are not so quick to hit the panic button. 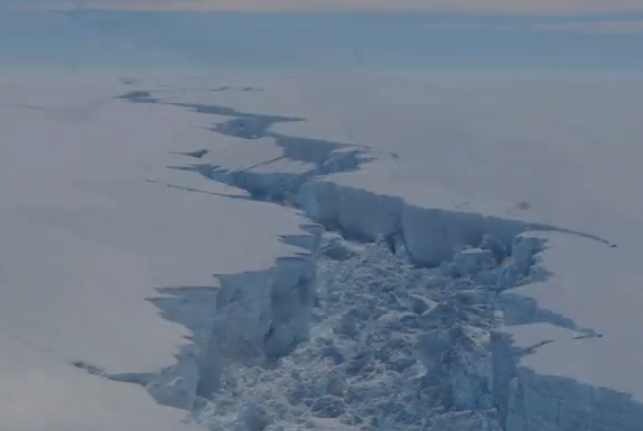 While the media is consumed with the alleged Trump-Russia connection, the press will always take a few moments to spotlight a news story promoting its treasured “Climate Change” narrative.

This week’s entry was the dramatic calving of an Antarctic ice sheet, so large it rivals the state of Delaware in size.

The 2,400 square-mile mass of ice won’t immediately raise sea levels, but its loss has probably altered the profile of the continent’s western peninsula for decades to come, scientists say.

The Larsen Ice Shelf consists of a series of many floating ice chunks. It is named for Norwegian explorer Capt. Carl Anton Larsen, who discovered it in 1893.

The British Antarctic Survey summarized the event and offered interesting background information on the area.

Many press accounts were quick to tie the event to global warming. This analysis was offered by The New York Times:

Talk to scientists who have worked in the Arctic, Antarctic or the world’s glacial zones for decades, and what they keep coming back to is that they have witnessed monumental physical changes in these once-frozen regions within their professional lifetimes.

However, many scientists were not inclined to press the panic button.

Scripps Institution of Oceanography glaciologist Helen Fricker has been studying the massive icebergs that periodically break off of Antarctica since the mid-1980s.

“This is not the largest iceberg we’ve ever seen come from Antarctica. There are parts of Antarctica that are changing and definitely contributing to sea level. But we shouldn’t get too excited about every little crack and every little melt stream that turns up in Antarctica, because some of these processes are natural,” she said.

Fricker said to keep in mind that this chunk of ice — though it may seem large — was already floating in the ocean. So, like an ice cube melting in a glass of water without raising the volume contained in the glass, it will not directly cause sea levels to rise.

The scientists most involved in the research of this ice sheet patently refused to connect the breakage to anthropogenic climate change.

Scientists with Project MIDAS watched the rift in Larsen C ice shelf of the Antarctic Peninsula grow overtime and although they expressed concerns about what it means about the stability of the overall ice shelf — they specifically refused to connect it to manmade climate change.

Swansea University glaciologist Dr. Martin O’Leary of MIDAS called it “a natural event” and admitted “we’re not aware of any link to human-induced climate change.”

Furthermore, many professionals are reflecting upon the very limited historical data set we have as it relates to the Antarctic and its ice sheets.

Climate scientist Antony Watts notes that there weren’t any “Arctic or Antarctic scientists” a mere half-decade ago, and bases weren’t even established in either region until World War II.

Just because we can see changes happening on the most remote region of our planet in exquisite detail for the first time in the history of mankind doesn’t necessarily mean those changes are unprecedented. The media has this odd viewpoint that Earth’s processes act over human lifetimes, but in reality they act over millennia.

I can’t get too worked up about this, even though the usual suspects are.

The good news is that Watts’ sentiment can be seen in some press outlets (at least some foreign ones), like The Hindu:

Clearly, the loss of a massive portion of the Larsen C Ice Shelf marks another milestone in the evolution of this remote region. Yet, the lack of long-term data on Antarctica, as opposed to other regions, makes it difficult to arrive at sound conclusions.

Despite the need to address the usual climate drama, I am grateful for this stunning diversion from all the Russia news.

(For those who are interested in climate science, I recommended this review of the 2,400 year Bray climate cycle and its impact on human societies).

Just my luck that that this happened on the other side of the globe. Still waiting for Chicago to drop off into Lake Michigan….

As we all are.

Yeah, Delaware is pretty big, but how about an iceberg the size of Massachusetts and Connecticut COMBINED. Happened in 1956.

because the ice built up and was too heavy.. oh that also contradicts Global Warming Climate Change agenda..

forgot this: all those frozen krill ARE GONNA DIE! so much fish food for so many species..oh the shame

…but its loss has probably altered the profile of the continent’s western peninsula for decades to come, scientists say.

… it will not directly cause sea levels to rise.

Not so fast. It might indirectly contribute to a sea-level rise, if glaciers develop on the new coastline.

‘ “But we shouldn’t get too excited about every little crack and every little melt stream that turns up in Antarctica, because some of these processes are natural,” she said.’

Anybody ever buy a coke with ice at McDonalds and notice that, when the ice melts, the level of the drink is actually lower than it was before?

Simple physics. Water actually expands in volume when it freezes, plus freezing water can trap air.

So this giant iceberg will actually lower global sea levels.

And there is no incoming epidemic of coming Antarctic icebergs either. Contra what global warmers have been predicting the past two decades, In most of Antarctica, the ice pack is expanding and growing thicker, save for the one major region with underseas volcanic activity.

The level of the drink would drop only if the ice was entirely submerged before it melted. But when it’s free to float, some of it sticks up above the surface of the liquid (i.e., the drink). It displaces exactly its own weight in liquid, not its own volume.

End result, no change of level when the ice melts.

The only “steady state” in the world is the blabbering of the Warmists when anything happens. Here in Alaska we can’t walk over to the Far East of Russia since global warming submerged the Bering land bridge.. a long time ago… pre-industrial revolution thingy. As Sarah Palin noted… we can see Russia from here but can’t walk to it anymore. But there is a good side to this… any moose or caribou hunting doesn’t require looking over our shoulder for saber toothed tigers that got pushed out with the last ice age. I live in a glacial valley… and the glaciers (seven of them) receded a long time ago… property values have improved since the last ice age.

all you have to do is to wait for winter and it freezes over and you can walk or drive it, there was a show on discover channel I think where they were going to try and do that.

I’m surprised the Saudi;s didn’t try and tow it to Saudi Arabia for drinking water.

As this ice sheet was actually supported by the ocean, if the sea level dropped, it is very likely that structural stresses would cause the sheet to fracture as it did. So, based upon the fact that this ice sheet fractured and the location and manner of fracturing, either a rise in sea level or a drop in sea level could have caused it. Add in the myriad other factors involved and it becomes impossible to state that this even is indicative of global environmental warming.

climate porn…that’s the new name for this stuff

akin to shark week but for weather nerds.

At a party, talking with a stranger about the rift in the Larsen shelf is a good way to break the ice.

Maybe soros will splurge for press junket to the iceberg – and it will sink.