“We are the adults and we need to act like it.” 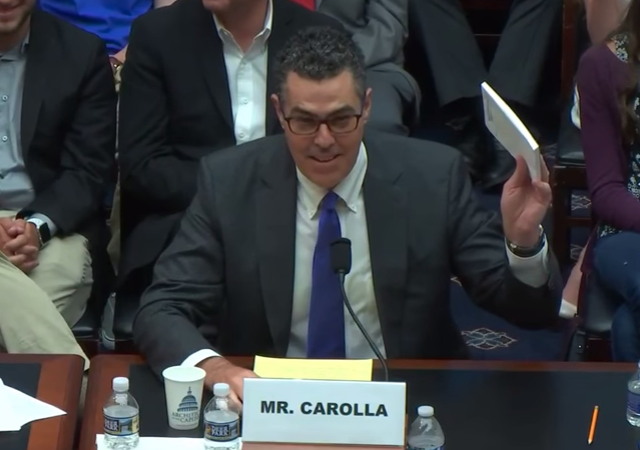 Congress held a hearing this week on the subject of free speech on college campuses, a topic we’ve covered extensively over the years.

Among those who offered testimony were conservative writer and radio host Ben Shapiro, and comedian and sometimes TV host Adam Carolla.

Here’s the hearing agenda, via the House of Representatives website:

Challenges to Freedom of Speech on College Campuses

Ben Shapiro focused on the process by which social justice warriors use microaggressions and the philosophy of intersectionality to silence others.

Here’s part of Shapiro’s opening statement, via The Daily Wire:

It’s an honor to testify here before you here today. The reason I’m with you today is that I speak on dozens of college campuses every year, so I have first-hand experience with the anti-First Amendment activities that have been taking place on some of our college campuses. I’ve encountered anti-free speech measures, administrative cowardice, even physical violence on campuses ranging from California State University at Los Angeles to University of Wisconsin at Madison which is driving the legislation that Ms. Demings was talking about, to Penn State University to UC Berkeley. And I am not alone.

In order to understand what’s been going on at some of our college campuses, it’s necessary to explore the ideology that provides the impetus for a lot of the protesters who violently obstruct events, pull fire alarms, assault professors and even other students — and the impetus for administrators who all too often humor these protesters. Free speech is under assault because of a three-step argument made by the advocates and justifiers of violence.

The first step is they say that the validity or invalidity of an argument can be judged solely by the ethnic, sexual, racial, or cultural identity of the person making the argument.

The second step is that they claim those who say otherwise are engaging in what they call verbal violence.

The final step is they conclude that physical violence is sometimes justified in order to stop such verbal violence.

Read the rest here. Watch the video below:

Carolla’s testimony focused on the need for faculty and administrators to resume their role as adults on campus. He stressed that sheltering students from ideas ultimately harms them.

Comedian Adam Carolla was invited to testify before Congress on the state of free speech at American universities and said that it was time for the “adults” to take back control of campus.

Carolla, who has emerged as an active voice for free speech and is working on a new film that rails against “safe spaces,” told the House Oversight and Government Reform Committee that university faculties are doing a disservice to students by letting them decide what speech is safe for them to hear.

“Children are the future but we are the present” Carolla said. “We’re the adults.”

“We’re talking a lot about kids, and I think they’re just that—kids,” Carolla said. “We are the adults and we need to act like it.”

“These are 18- and 19-year-old kids that grew up dipped in Purell playing soccer games where they never kept score and watching Wow! Wow! Wubbzy!, and we’re asking them to be mature,” he said. “We need the adults to start being the adults.”

It’s heartening to see this issue finally getting the attention it deserves.

A loser is someone whose career is defined by where they work. Shapiro takes any place he works and makes it a place people know about. He’s a sharp tack.

Ben Shapiro is probably one of the most astute, quick, and intelligent people out there.

Love seeing him tear liberal pundits to bits. It really doesn’t really take much these days.

Especially since it was over a fake news item. His disgust is about on par with yours, as fake as the original item.

Trump needs to treat these college campuses who violate civil rights the same way the Jim Crow KKK Southern cities were treated. Send in the FBI and arrest the administrators and students for violating civil rights.

notamemberofanyorganizedpolicital in reply to ConradCA. | July 28, 2017 at 3:39 pm

Reviewer there says: “I figured I owed Milo’s book a read in the name of free speech, and I am glad I did.

Full of biting humor and just the right amount of snark, it gives

a hilarious view of the hypocrisy of the “tolerant.”