Landau could play any role handed to him and guided many successful actors after him. 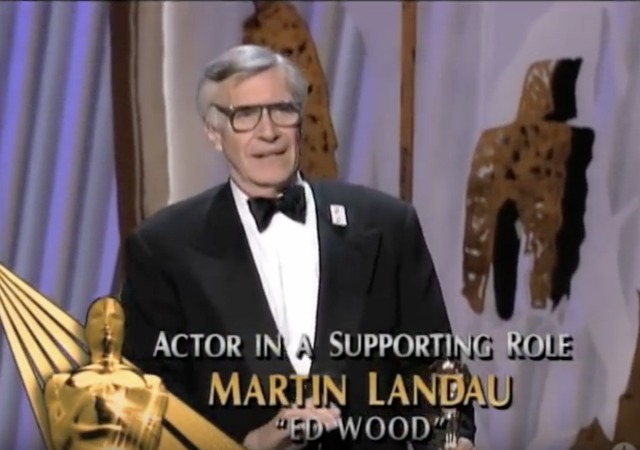 Celebrated and loved actor Martin Landau passed away on Sunday at the age of 89, only a few hours after we received the devastating news that George Romero died.

Landau proved through the course of his career that he could perform any role handed to him. His talents didn’t end there. He handed off his brilliance to up and coming actors like Jack Nicholson.

Landau received a cartoonist job at the New York Daily News but quit after five years to pursue his dream of acting. From The Hollywood Reporter:

In 1955, he auditioned for Lee Strasberg at the Actors Studio (choosing a scene from Clifford Odets’ Clash by Night against the advice of friends), and he and Steve McQueen were the only new students accepted that year out of the 2,000-plus aspirants who had applied.

With his dark hair and penetrating blue eyes, Landau found success on New York stages in Goat Song, Stalag 17 and First Love. Hitchcock caught his performance on opening night opposite Edward G. Robinson in a road production of Middle of the Night, the first Broadway play written by Paddy Chayefsky, and cast him as the killer Leonard in North by Northwest.

In Middle of the Night, “I played a very macho guy, 180 degrees from Leonard, who I chose to play as a homosexual — very subtly — because he wanted to get rid of Eva Marie Saint with such a vengeance,” he recalled in a 2012 interview.

As the ally of James Mason and nemesis of Saint and Cary Grant, Landau plummets to his death off Mount Rushmore in the movie’s climactic scene. With his slick, sinister gleam and calculating demeanor, he attracted the notice of producers and directors.

He went on to star in Cleopatra, The Greatest Story Ever Told, Pork Chop Hill, and Nevada Smith. Landau became best friends with James Dean and dated Marilyn Monroe for several months.

Landau received three Emmy nominations for his role in Mission: Impossible. He could have starred as Spock on Star Trek, but he turned it down. That role went to Leonard Nimoy, who took over Mission: Impossible when Landau left the show.

He received his first Oscar nomination for Francis Ford Coppola’s Tucker: The Man His Dream in 1988 and received another one in 1989 for Woody Allen’s Crimes and Misdemeanors.

It wasn’t until 1994, though, that the award shows finally showered Landau with the recognition he always deserved. Everyone fell in love with his portrayal of Bela Lugosi in Tim Burton’s Ed Wood, which gave him the Oscar for Best Supporting Actor. From Deadline:

Burton also cast him in his hit Sleepy Hollow in 1999. Landau said him and Burton “kind of understand each other” and didn’t have to “finish a sentence” with each other.

Landau also earned Emmy nominations “for playing the father of Anthony LaPaglia’s character on CBS’ Without a Trace and guest-starring as an out-of-touch movie producer on HBO’s Entourage. He portrayed billionaire J. Howard Marshall, the 90-year-old husband of Anna Nicole Smith, in a 2013 Lifetime biopic about the sex symbol, and starred for Atom Egoyan opposite Christopher Plummer in Remember (2015).”

Martin Landau, Man of a Thousand Similar Voices, Dead at 89

The big story about Martin Landau is that while on “Mission Impossible” he portrayed dozens of foreign persons who all sounded the same.

It didn’t matter if they were Russian or Moldovin that all had the same “international accent”.

Because Landau was able to linguistically create collusion between multiple cultures.

I never understood why Landau was not credited in “Sleepy Hallow”

No mention of his starring role in Space:1999 series. Not well known but a bit of a cult classic in the past. He had a tough time I think, surrounded by a cast that were often not up to his level.

Mission Impossible remains one of my all time top five favorite TV series. It just seems a bit incongruous watching the season one episodes without Mr. Phelps, played by Peter Graves. Graves replaced Steven Hill who played Daniel Briggs as head of the IMF. “Good morning, Mr. Briggs,” never had quite the same panache. A bit of celebrity gossip. Landau and Barbara Bain, who played Cinnamon Carter, were husband and wife.

In North by Northwest Landaus character Leonard made an off the cuff remark about calling it his woman’s intuition. The timing of that one line and the setting in which it was made was subliminally conveyed his relationship with Phillip Vandamm, played by James Mason. No nudity or probing each other’s tonsils with their tongues was required.

I loved Mission impossible! Quintessential Cold War era show. I think it taught a lot of us kids the evils of communism and socialism