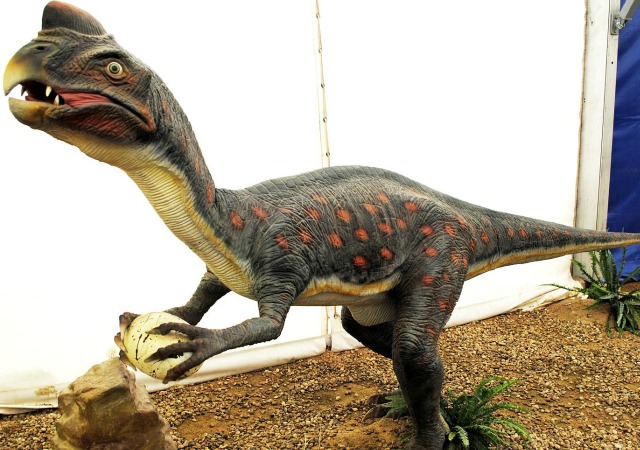 London’s Natural History Museum had to correct a mistake on one of its signs after a 10-year-old boy noticed an error.

Charlie has always loved paleontology and insisted to his mother that the museum used a picture of a Protoceratops on a sign meant for the Oviraptor. From The BBC:

On one labelled Oviraptor – a dinosaur with a beak that walked on its hind legs – there was instead the outline of a four-legged Protoceratops.

“He’s loved palaeontology since he was very young and started reading encyclopaedias when he was about three.

“Charlie has Asperger syndrome and as part of that, when he likes a subject he will try and find out everything about it.”

Charlie explained: “I found a side-by-side comparison to the dinosaur, and I saw it said Oviraptor, but then the shape of the dinosaur was wrong and we told a member of staff.”

His mother said: “When he told us, we said, ‘OK, we know you’re good, but this is the Natural History Museum.

“It turned out Charlie was right.”

A spokesman said the dinosaur gallery had been “refurbished several times” and “an error has been made”.

The museum was “very impressed with Charlie’s knowledge” and the sign will be corrected, he added.

LOL! They better hire Charlie to check their work!

I am not surprised about the child. I am “surprised” about the experts being wrong.
Remember this one the next time someone tries the ‘appeal to authority’ fallacy.

Interestingly enough—although this was most likely a case of somebody moving signs out of the way when washing the hand and nose prints off the display case glass and putting them back in the wrong places—the Oviraptor/Protoceratops confusion goes back a long way, to Roy Chapman Andrews’s expedition to Mongolia some ninety years ago, where he made the first finds of dinosaur eggs (or rather the first finds which were correctly recognized as dino eggs). They were assumed to be Protoceratops eggs, simply because P. andrewsi was relatively common in that area. And when that same Mongolian expedition found the skull of some other dino four inches from one of these eggs, the inference was that it was the fossil of some predator intent on stealing the Protoceratops eggs. Hence the name Oviraptor philoceratops, “egg-thief lover-of-ceratopsians” (although the Eminent Paleontologist who named it, Henry Fairfield Osborn, cautioned that strong assumptions about its diet were unwarranted by the evidence).

Seventy years later, identical eggs were found to contain embryo Oviraptors. So more likely the dead dino found near the eggs was tending its own brood, rather than raiding a Protoceratops nest. So much for that “raptor” thing. The name stuck, anyway.

In any event, all of our knowledge of dinos in general is based on very sketchy evidence. In fact, the adult Oviraptor philoceratops is known from only that one incomplete skeleton.

(Hey, monomania isn’t only for kids with Asperger’s.)