Military has neutralized the suspect. 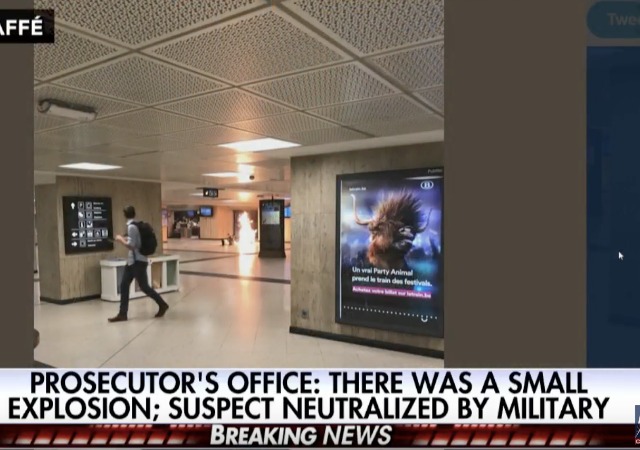 Officials evacuated the train station in Brussels, Belgium, after a loud explosion. The military neutralized the man, who wore an explosives belt according to Belgian media. From Fox News:

The prosecutor’s office in Brussels confirmed to local media there was a small explosion, and the military neutralized the suspect.

There were no casualties reported in the incident at the train station. The military neutralize the suspect, however the prosecutor’s office could not confirm if he was dead or alive.

Witnesses described the incident, including one man who heard the suspect scream Allahu Akbar:

“I went down to the mezzanine level, someone was shouting. Then he cried ‘Allahu akbar,’ and he blew up a trolley,” Nicolas Van Herrewegen, a railway sorting agent, told reporters.

Van Herrewegen added: “It wasn’t exactly a big explosion but the impact was pretty big. People were running away.”

He described the suspect as well-built and tanned with short hair, wearing a white shirt and jeans.

“I saw that he had something on him because I could see wires emerging, so it may have been a suicide vest,” the witness said.

Another witness spoke to Fox News:

A witness to the incident, Rémy Bonnaffé, told Fox News he heard two loud bangs like an explosion at the station.

Bonnaffé said he first heard two loud bangs like an explosion, with the first bang taking place while everyone was still at the boarding platform. When the second bang took place, everyone then hid, according to Bonnaffé.

Bonnaffé told Fox News he then ran across the street to the Hilton and heard two noises that sounded like gun shots.

Bonnaffé took a photo which shows an object on fire, which he thought was a suitcase that could have been the thing that exploded.

Military has neutralized an individual in #Brussels Central Station. The situation is under control. Follow the instructions of @ZPZ_PolBru.

Officials will meet on Tuesday night to determine if this was a terrorist attack.

We may never know their true motive. As Columbo would say, “It’s a mystery to me”

notamemberofanyorganizedpolicital in reply to PrincetonAl. | June 20, 2017 at 7:12 pm

But we do know they are popping up like crab grass.

“Then he cried ‘Allahu akbar,’ and he blew up a trolley,”

“People were running away,”

So many Islamophobes trying to separate themselves from the Muslim. Rampant discrimination.

We need to ask ourselves whether this attack was foreseeable, predictable, and to some degree self-inflicted.

Absolutely predictable, caused as it was by Republican rage and hate. Get with the program, Republicans are to blame for everything.

It’s potentially racist in targeting its victims despite having no known genetic factor.

My money is on the Amish.

hell, the killed the POS and good on them for doing so.

Heart of the EU…bastion of Muslim “tolerance”

You enjoy tolerating these acts as repayment for your policies.