What We Know About the Latest London Terrorist Attack

What We Know About the Latest London Terrorist Attack 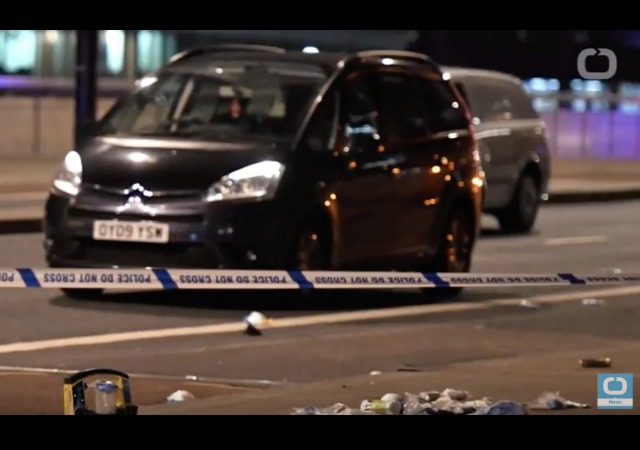 Terrorists killed seven people and injured 48 more on London Bridge and Borough Market in London on Saturday night. 35 of the injured remain in hospitals around the area.

Police have also made 12 quick arrests in east London in connection with the terrorist attack.

This is what we know so far about the attack.

● At 10.08pm on Saturday the Metropolitan Police received reports that a vehicle had struck pedestrians on London Bridge. A white van with Hertz markings then continued to drive to nearby Borough Market, a popular bar and restaurant area.

● Three men armed with knives left the vehicle and stabbed a number of people. Armed officers confronted the men, who were wearing what looked like explosive vests but were later established to be hoaxes. All three were shot dead in Borough Market within eight minutes of the first call.

● Seven people have been confirmed dead and at least 48 wounded have been taken to five hospitals across London. NHS England says that 21 people are in a critical condition.

● Eight armed police officers fired around 50 rounds during the attack. One member of the public sustained a gun shot wound, the police said, but the injuries are not critical in nature.

From Theresa May, Jeremy Corbyn, and Police

Prime Minister Theresa May delivered a statement, in which she declared that “things need to change” and enough is enough. From The Evening Standard:

She said: “As terrorism breeds terrorism and perpetrators are inspired to attack, not only on the basis of carefully constructed plots after years of planning and training, and not even as lone attackers radicalised online, but by copying one another and often using the crudest of means of attack.”

She announced more needed to be done to clampdown on extremist “safe spaces” both online and in Britain’s communities.

Mrs May also claimed there was “far too much tolerance of extremism in our country” and called for it to be tackled head on, while reviewing the country’s counter-terrorism strategy to combat the changing threat.

Labour Party leader Jeremy Corbyn used the attack to attack May. From The Independent:

Pointing the finger again at Ms May’s record, Mr Corbyn said the “difficult conversations” suggested by the Prime Minister in her Downing Street speech on Sunday morning should start “with Saudi Arabia and other Gulf states that have funded and fuelled extremist ideology”.

“Our priority must be public safety and I will take whatever action is necessary and effective to protect the security of our people and our country,” Mr Corbyn told his audience.

“That includes full authority for the police to use whatever force is necessary to protect and save life as they did last night, as they did in Westminster in March.

“You cannot protect the public on the cheap. The police and security services must get the resources they need, not 20,000 police cuts.

This is a completely different view than the one Corbyn has carried for awhile. For years Corbyn has been against the “shoot to kill” policy, which is what police used on Saturday to kill the terrorists.

The Metropolitan Police have “opened a casualty bureau for those concerned about family and friends who might have been caught up in the attacks.” They have also asked that anyone with videos or photos to hand it over to the police. Assistant commissioner Mark Rowley promised to amp up the police presence across the capitol “in the coming days.”

The police arrested 12 people in Barking, located in east London, after they raided “a flat belonging to one of the three attackers.” From the BBC:

According to neighbours, the dead attacker lived there for about three years and was married with two children.

One man, who did not want to be named, said one of the attackers had become more extreme over the past two years.

“We spoke about a particular attack that happened and like most radicals he had a justification for anything – everything and anything.
“And that day I realised that I need to contact the authorities,” he said.
He said no action was taken.

“I did my bit… but the authorities didn’t do their bit,” he said.

Market analyst Ken Chigbo, 26, described one of the attackers as “very sociable, a friendly guy.” The man even invited Chigbo to a BBQ last week, which he attended. Chigbo said he had a lot of fun at it. He even spoke to the man on Saturday. From The Guardian:

“I am moving and he was very interested in that and wished me well … He was particularly interested in the van I hired, where I got it from and if it was an automatic … It’s very strange to think about that conversation considering what happened just a few hours later.”

Others have said that a local mosque kicked him out. The Guardian continued:

Other neighbours said the man had been ejected from a local mosque after questioning an imam during a sermon about people “using their vote wisely” in the run-up to the 2015 general election. A spokesman for the Jabir bin Zayd Islamic centre, which neighbours said was one of two mosques the suspected attacker had attended, confirmed that incident had happened but said the man involved was not a regular and was not known to them.

“Three men armed with knives left the vehicle and stabbed a number of people. Armed officers confronted the men, who were wearing what looked like explosive vests but were later established to be hoaxes. All three were shot dead in Borough Market within eight minutes of the first call.”

When seconds count, the police are only minutes away.

The Police did well in ending it. Sadly, there is at least one report of the local police running from the terror. Unarmed (sometimes even armed) against a knife wielding assailent is a great way to get cut up.

Yes – and they ran away!

Liberals are beyond stupid – they are delusional. We don’t want to go down with them.

Katy Perry uses the terror attack for the sake of a left-wing political agenda; A CNN analyst suggested that perhaps the attack could have been a right-wing cover-up;
http://www.theblaze.com/news/2017/05/24/listen-to-katy-perrys-ridiculous-response-to-the-manchester-terror-attack/

The official response was, “Run, Hide, Tell”
With plans like that, what could go wrong?

It’s a good thing the PM said “Enough is enough”.
That should certainly put an end to it.

We are led by such wise people.

I think we all know what they’ll do. They’ll crack down on car rentals. Yep, that’ll do it.

Britain made the same catastrophic blunder as France in the post-WW2 era, when it tried to retain its colonies by pretending that they were “organic” parts of the home country. The vain hope was that they could claim that the colonial possessions weren’t foreign countries filled with alien cultures, but portions of a unitary whole which it made no sense to cut up. And part of that little fraud was free travel throughout these unitary wholes. Unrestricted immigration (which, in their formula, wasn’t really immigration at all) of alien and, too often, unassimilated sub-populations from India/Pakistan and North Africa was the inevitable result. Even if they can cut off the Merkel flood of hostile aliens, that won’t do anything about the ones who are already resident. And so they’re screwed.

Don’t know if you are aware of Enoch Powell and his strong criticism of immigration to the UK, in a speech in 1968 to Conservatives which led to Heath kicking him out of the shadow cabinet.

Funny thing the Telegraph published the full text back in 2007.
http://www.telegraph.co.uk/comment/3643823/Enoch-Powells-Rivers-of-Blood-speech.html
Maybe with the same foreboding?
” I am filled with foreboding; like the Roman, I seem to see “the River Tiber foaming with much blood.” “

Many years ago (10?), I saw the documentary All White in Barking at a conference. It showed the remarkable, slow but steady, takeover of Barking by Muslim immigrants. I can’t imagine how Barking is now. There are probably more than 12 people to arrest.

The double-edged scalpel of excessive immigration and “reform” with ulterior motives. Also, [class] diversity or judging people by the “color of their skin” is a progressive condition that forces catastrophic anthropogenic climate change.

The UK’s Daily Mall columnist Katie Hopkins, already in hot water for expressing the “wrong” views, opined in the wake of this latest attack that it was time to round up all the 3,000 suspected jihadis known to the police and intern them for the duration, and expel the known radical imams/preachers in the mosques from the country. Of course, that is the type of action taken in times of war.

Seems reasonable to me. This is, after all, a war that has been openly declared upon the West by many various organs of Islam, while not openly resisted or denounced by many other, perhaps more numerous organs of Islam. Time to get cracking.

That would be the same Katie Hopkins who was one of those who witnessed the MSM staging a Muslim anti-ISIS protest?

After the last attack there was also a Sikh Twitter pundit who photographed a Sikh cab driver offering aid to those who’d been in the area. A British journalist asked the guy if they could use the photo and he agreed; they ran it identifying the cab driver as Muslim.

May doesn’t really believe her rhetoric, she’s too wedded to the foolish progressive view of Islam to take any real action. She won’t be investigating mosque or Islamic charity finances, for example, which are primary vectors of terror financing, nor will she order raids of mosques.