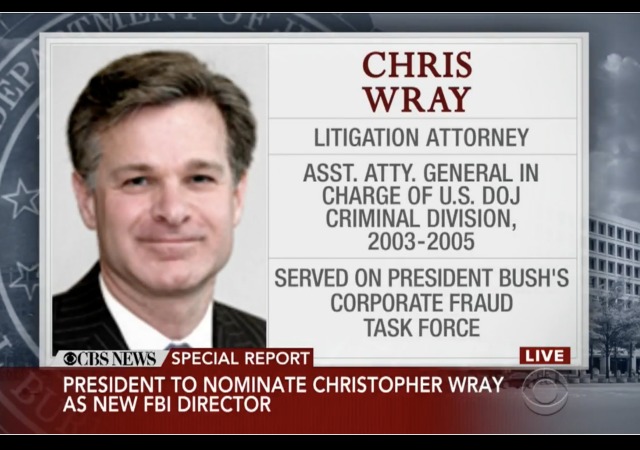 The announcement comes one day before former FBI director James Comey testifies in front of a Senate committee.

The Senate will have to confirm Wray for the position.

Wray served as assistant attorney general at the Department of Justice during former President George W. Bush’s first term. He took charge of the criminal division in 2003 and worked there until 2005.

During his time at DOJ, Wray became known for overseeing the Enron prosecution task force and playing a major role in the department’s post-9/11 response.

Wray received the Edmund J. Randolph Award, the DOJ’s highest award for public service and leadership, when he left the Justice Department in 2005.

He first joined the DOJ in 1997, though, when he worked “as a prosecutor for the U.S. Attorney’s Office for the Northern District of Georgia.”

Wray entered the private sector when he left the DOJ in 2005. He currently works at the King & Spalding law firm in Washington, D.C. as a litigation partner and “chairs the firm’s Special Matters and Government Investigations Practice Group.”

New Jersey Governor Chris Christie hired Wray to represent him during the “Bridgegate” investigation. He first met Wray when they both worked under Bush’s administration where they worked together “on a fraud investigation into the the drug maker Bristol-Myers Squibb.” From NorthJersey.com:

“I have the utmost confidence in Chris. He’s an outstanding lawyer. He has absolute integrity and honesty, and I think that the president certainly would not be making a mistake if he asked Chris Wray to be FBI director,” Christie said Thursday.

Christie, who is friends with Trump, declined to say whether he had any involvement in the president’s decision to consider Wray for the role.

This is the guy who will prosecute Comey should he testify that Trump pressured him to drop the case on Gen. Flynn and failed to report it to the DOJ. This is getting complicated for Comey. Maybe he’ll call in sick.

The thing is Comey doesn’t have to say anything. The media will hear what it wants to hear and spin from there.

He comes into this hearing with zero credibility with everyone already. Everyone is pressuring him to deliver for their side and he loses either way. Being a lame, mealy-mouthed whiner will not endear Comey to anyone. Should he trigger yet another WTF firestorm with yet another incoherent performance, this will reinforce Trump’s case for how corrupt the government is.

Being strong in the polls will empower Trump’s War Room to lean on Congress on “repealing” ObamaCare and passing tax/spending reform THIS year.

So whats the low down on this guy? If he is all about enforcing the law then that means Democrats will be completely against his appointment! After all, we can’t have people enforcing the laws now can we?

I am ever more disappointed with Trump. Instead of nominating a person who put some real time in on the ground in the FBI, or other law enforcement, and not another U.S. Attorney’s Office political bureaucrat, he nominates a D.C., Bushy, Yaley swamper, who gets a sterling recommendation from Christie, which is a really bad sign. We may have a real Rube for a President.

There’s a natural and desirable subtle tension between law enforcement and a prosecutor’s office. When you snatch a person from a strictly prosecutorial background and place them in charge of work requiring a different skill set, you get another James Comey – a political beast.

This is real news, but will get zero play in the media. A terribly corrupt practice for which Bharara and whoever approved it at DOJ should be disbarred.

In other DOJ news today – Sessions ended another Obama era practice of letting companies make settlements by paying third parties who were neither victims or parties to the lawsuit.

Liz, I think that’s fantastic of Sessions and although I didn’t support his recusal, which has led to this official investigation, I do hope it is rumor only about his resigning.

I agree Sessions should not have recused himself. He should have given the ‘rats and the media the finger and told them “tough shit, Sherlock.” That said, it’s even worse that Trump didn’t just suck it up, is still pouting about it and bitching out Sessions for it….publicly.

When you appoint someone who was/is an elected official like Sessions, they will be psychologically disposed to following the wishes of their former brethren. Sessions is a good man, but he may not have been the best choice simply because of this reason.