“We wanted the staff to see that Trump supporters are just as human as anyone else.” 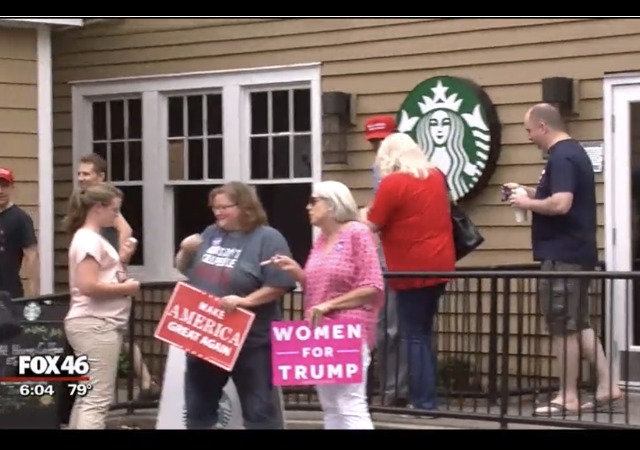 The staff at a Starbucks in Charlotte, NC, allegedly mocked a woman wearing a Donald Trump t-shirt. When word spread, Trump supporters staged in a sit-in to support the woman. From The Miami Herald:

Starting at 2 p.m., more than 50 tee-shirt wearing Trump backers staged a peaceful gathering at the Dilworth coffee house, filling chairs, tables and even the parking lot at one point.

The group told TV station Fox 46 the sit-in was a little tense at the beginning, when a throng of people filed through the door. But the mood lightened as more and more people ordered coffee using the names of different members of the Trump cabinet, including Mike Pence and Jeff Sessions.

“I gave them the name Trump and…they were very gracious about it,” Shellie Anderson told Charlotte TV station Fox 46. “We just wanted to reverse the little negativity…It’s really good to come together and take something negative and just come in here and be respectful.”

The group presented no demands. Instead, its members sought to take a stand against any business disrespecting customers based on their politics, said James Tatro, a MeckGOP board member who participated in the event.

While it has been described as a sit-in, Tatro says the crowd was made up of paying customers and not just “people who were filling chairs.”

The Mecklenburg County Republican Party posted on their Facebook page that the event was “a perfect example of a peaceful political demonstration.” The party reported that participants included representatives of the MeckGOP Board, Deplorable Pride (an LGBT Republican group), Hispanics For Trump, Women For Trump and even some independent voters. Republican Rep. William Brawley of Matthews also attended, and spoke to the crowd.

Starbucks has formally apologized for the original incident, which took place earlier this month. Kayla Hart of Charlotte reported she was wearing a shirt in support of President Donald Trump at the Starbucks and was bullied and laughed at by the staff.

Instead of the barista putting Hart’s name on her cup, she said the label had the phrase “Build a Wall,” in reference to the president’s campaign promise to build a wall along the U.S.-Mexican border.

Hart, who did not participate in the Saturday event, told FOX 46 Charlotte she walked out when other people noticed and other baristas laughed. She said she believed she was being bullied for wearing the shirt. “I just found it really sad that I can’t wear a t-shirt with our president without being made fun of,” Hart told FOX 46 Charlotte.