“increase led to steep declines in employment for low-wage workers” 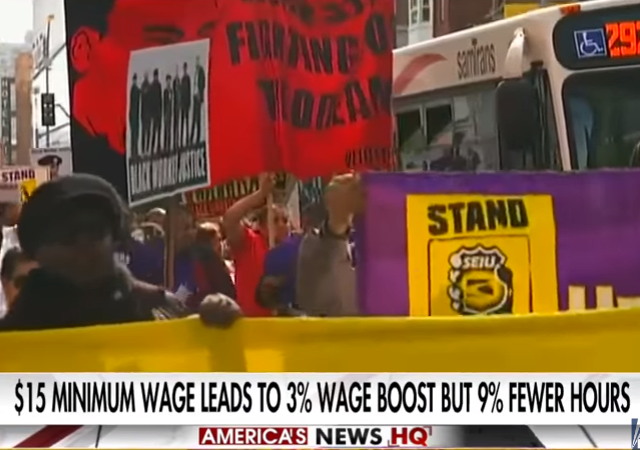 The progressive city of Seattle pushed its minimum wage up to $15 dollars an hour but a new study from economists at the University of Washington suggests the measure is hurting the very people it was intended to help.

This is an issue the left often refuses to understand. If you force a higher wage than the market demands, employers are forced to adjust in ways that are less favorable.

Seattle’s Minimum Wage Hike May Have Gone Too Far

As cities across the country pushed their minimum wages to untested heights in recent years, some economists began to ask: How high is too high?

Seattle, with its highest-in-the-country minimum wage, may have hit that limit.

In January 2016, Seattle’s minimum wage jumped from $11 an hour to $13 for large employers, the second big increase in less than a year. New research released Monday by a team of economists at the University of Washington suggests the wage hike may have come at a significant cost: The increase led to steep declines in employment for low-wage workers, and a drop in hours for those who kept their jobs. Crucially, the negative impact of lost jobs and hours more than offset the benefits of higher wages — on average, low-wage workers earned $125 per month less because of the higher wage, a small but significant decline.

“The goal of this policy was to deliver higher incomes to people who were struggling to make ends meet in the city,” said Jacob Vigdor, a University of Washington economist who was one of the study’s authors. “You’ve got to watch out because at some point you run the risk of harming the people you set out to help.”

When Seattle officials voted three years ago to incrementally boost the city’s minimum wage up to $15 an hour, they’d hoped to improve the lives of low-income workers. Yet according to a major new study that could force economists to reassess past research on the issue, the hike has had the opposite effect.

The city is gradually increasing the hourly minimum to $15 over several years. Already, though, some employers have not been able to afford the increased minimums. They’ve cut their payrolls, putting off new hiring, reducing hours or letting their workers go, the study found.

The costs to low-wage workers in Seattle outweighed the benefits by a ratio of three to one, according to the study, conducted by a group of economists at the University of Washington who were commissioned by the city. The study, published as a working paper Monday by the National Bureau of Economic Research, has not yet been peer reviewed.

Even progressive writer Jill Fillipovic has acknowledged the reality:

Seattle’s minimum wage hike (which I thought was a great idea) may actually have cost low-wage workers: https://t.co/iSC9AQb9WC

…the measure is hurting the very people it was intended to help.

Well, I would argue that the measure was intended to help the progs in Seattle feel good about themselves, so in that regard, it’s working just as intended.

notamemberofanyorganizedpolicital in reply to rinardman. | June 27, 2017 at 12:17 pm

And there’s also the political goal of breeding a permanent underclass, one which will be reliably surly and resentful … and, being unemployed, will have plenty of spare time to go on marches and enjoy a bit of rioting and looting.

It seems that all is proceeding according to plan.

I remember how well that worked out for the 18th Century French Elitists………..

America doesn’t have a natural serf or peasant class of any substantial size. The colonial and frontier economies never needed masses of dumb brute labor, so they never developed. The closest we ever came was perhaps Southern plantation culture, and that never dominated the country. The expansion to the West was driven by small freeholders, and they weren’t peasants.

But the Democrats need a permanent underclass; an artificial one will do. So they’ve been working for decades to create one.

It is helping the unions who are the onespushing this nonsense.

And putting more money in the unions pocket.

Once again we see the liberal technique of “Look at what I intend, not what actually happens”. If the minimum wage reaches $15 for the lowest paid worker then guess what will happen to all of the prices that the minimum wage worker has to pay for their goods? That’s right, they all rise. So their net gain is a loss because they will get less hours offered to work and the goods and services will all be higher because everyone makes $15/hour. This shows us that logic and common sense are not part of the liberal’s arsenal.

I wonder how many other pay scales have or will increase because the base was raised?

Some may be increased because of union contracts that links wages to the minimum wage. Others may be raised in order to avert employee dissatisfaction.

But not fixed income pensions. THEY don’t go up.

notamemberofanyorganizedpolicital in reply to inspectorudy. | June 27, 2017 at 12:18 pm

So… When will they reverse it? Not holding my breath!!

They won’t reverse it. The economy will adjust with lower income to the poorest as other wages increase proportionally which puts the most money in the higher income groups while employment of minimum wage earners decreases as automation is introduced. And prices will rise to compensate, though with lower demand total value (eg, local product) decreases. If a nation does this the currency will be inflated to compensate too.

exactly as planned the rich progs benefit and NO ONE ELSE DOES.

Libtard reaction will be:
a) Attack the people conducting the study as racist, etc.
b) Attack the employers as racist, etc.
c) Attack the facts based on reality as they are from racists (see above).
d) Make up “facts” based on the narrative.
e) Feel good about oneself based on intentions to help regardless of reality.
f) Leave minimum wage in effect because it is intended to help.

As always, the poor pay the most for the actions of the leftists.

But when those former fast food workers go on the dole, they just become another strata of the Democratic party base, so why would the Democrats care that they lost their jobs?

Minimum wage is one of the most poverty creating, racist, poor-punishing pieces of legislation imaginable.

I would like to see Democrats who support attacked as such.

well, they are Democrats, the party of slavery, segregation, and the KKK so all that is a feature, not a bug.

There will be no lessons learned. The evil corporations and businesses will be blamed. And the workers who suffer because of the increase will continue to vote Democrat.

When the city itself, the bureaucrats and politicians, begins to suffer change will begin. Until then, oh well …. omelettes and eggs.

Everybody wants to be the utopia that Brother Rahm presides over.

That Rahm/Obama utopia is called “Man’s Country” in Chicago I believe…….

The difference between theory, and reality is reality. At least in theory.

Anyone with a basic understanding of economics told them that this is exactly what would happen, and they didn’t believe it. They still don’t.