All work and no play… 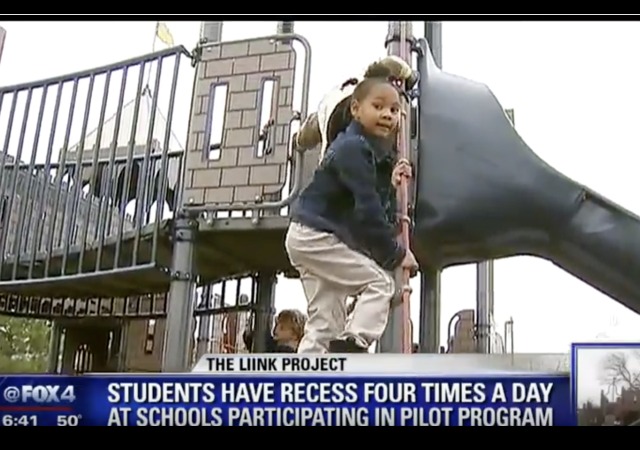 For the past two decades, school districts around the nation became obsessed with testing due to horrendous federal government standards. As a result, recess was abandoned by many school districts with disastrous results.

But now schools have realized the importance of recess and physical activity for kids, especially younger ones. Schools who have reintroduced recess have found a huge improvement in children’s behavior and overall well-being.

Three kindergarten girls looked close to taking a spill as they sat on the high back of a bench on a playground at Oak Point Elementary. Feet away, several administrators looked on, not making a move to stop them because at this school outside of Dallas, playtime is revered.

“As long as they’re safe, we allow kids to be kids,” said Daniel Gallagher, assistant superintendent for educational services in the Little Elm Independent School District.

That’s the mantra in this small school district, where schoolchildren are transitioning from one daily 30-minute recess to one hour a day, taken in four 15-minute increments. School officials say children are better focused with more unstructured breaks and do better in school.

The school board in Minneapolis may expand recess from 20 minutes to 30 minutes. Florida Governor Rick Scott (R) may sign a bill that requires schools to have 20-minute recess every day.

Four schools in Texas started the LiiNK Project in 2015-2016, “which connects play and character development and is designed to bridge academics with the social, emotional and physical well-being of children.” It spread to “14 public schools in six districts in Texas and Oklahoma” in the 2016-2017 year. The Washington Post continued:

Eagle Mountain Elementary School in Fort Worth began doing it last year when Bryan McLain was principal for kindergartners and first-graders, and this year it is also in second grade. He said the idea made a lot of sense to him because “kids aren’t hard-wired to sit still all day.” Now, he said, “we believe in essence we are giving children back their childhood.”

One result of allowing kids more time for recess, he said, has been increased instructional time “because the kids come back in and settle down and get to work because they know they will receive another recess before long.” He also said teachers referred kids to the office for disciplinary action less often as a result of the program and found that “kids are solving their own problems much more independently.”

“Our teachers and parents have completely embraced it, and I haven’t had a single parent complaint about it,” he said in an email. “… Teachers have to be very intentional and deliberate about their planning time and have done a remarkable job of working to meet the needs of the ‘whole child.’”

In 2013, the American Academy of Pediatrics’ Council on School Health stated that recess is “crucial” for young children to succeed. WSJ continued:

Supporters of daily recess often point to a 2013 study by the American Academy of Pediatrics, which says in part that “recess serves as a necessary break from the rigors of concentrated, academic challenges in the classroom.” The study also found that “safe and well-supervised recess offers cognitive, social, emotional, and physical benefits that may not be fully appreciated when a decision is made to diminish it.”

“Recess resets their brain,” said Lowell Strike, superintendent in the Little Elm district, where children have recess as long as the wind chill is at least 13 degrees and the heat index is no higher than 103.

Pediatric occupational therapist Angela Hanscom pointed out the obvious: “too many kids can’t sit still; they fidget, lose focus and act out.” This leads to doctors diagnosing kids with ADD/ADHD when they don’t have it.

Teacher Nicole Beal in Dallas, TX, has noticed great improvement in her kindergarten students. From WSJ:

“Their reading is better, they’re more focused,” she said. “Getting outside, it’s a nice break.”

When the children were asked who likes the extra playtime, every hand shot up.

Nothing progressives come up with have positive impacts. Nothing.

These are hair-brained ideas coming from frustrated failures of people, who are unable to do the work to succeed in the marketplace of free enterprise – so they have to destroy society and everyone along with them.

I didn’t realize it back in the 1960’s, but recess is good training for retirement.

Which, if done properly, is like an endless recess. 😀

Letting kids be kids improves their outlook and performance? WOW! Who’d a thunk? What a concept!

Sorry. Forgot to use my sarcasm markers.

This is no surprise at all. Young children have a very short attention span – about 15 minutes in the early grades – and they have a huge amount of energy. They are not meant to sit still.

Another triumph of the obvious.

I’m not so old that I can’t remember being there. Two 15 minute opportunities to run around like hell are vital. Four are even better. Zero is pure torture; behavioral problems are guaranteed.

For a while when very young I was in a school which had nothing for a playground but a parking lot. No swings, no climbing bars, not so much as a blade of grass. Nothing but blacktop and chain-link fence. It was enough.

Unfortunately it will all end when some kid falls, gets a bruise, and a helicopter parent goes ballistic.

There goes the funding for ADD/ADHD students. As the diagnoses begin to drop. Imagine how children will concentrate once they get the energy out of their bodies. Good for these school districts!

Cerebral oxygenation. Thermodynamic outlet. Stress relief. Also, it’s a good opportunity to socialize… and chase the girls around the schoolyard.

Gee, so all this time they just needed playtime and not Prozac?

Warning Libs: This may result in a few less “Pajama Boys” to join your ranks in the future.

In the fifties I ran to school every morning. There were no school buses. We had mid-morning recess. I ran home for lunch. I ran back to school for the afternoon session and then I ran home. I remember by name the one student in my grade out of over a hundred who had difficulty behaving properly. Boys, especially, need vigorous physical exercise every day.

Agree with cwillia. Boys are like puppies. You get behavior issues if they don’t run around. And that continues into adolescence where the excesses have bigger consequence.

Middle school kids need recess as much as the younger kids.

Duh! Those of us old enough to use our brains knew this instinctively!