Warren Beatty classic about American Communists in Russia during the Revolution 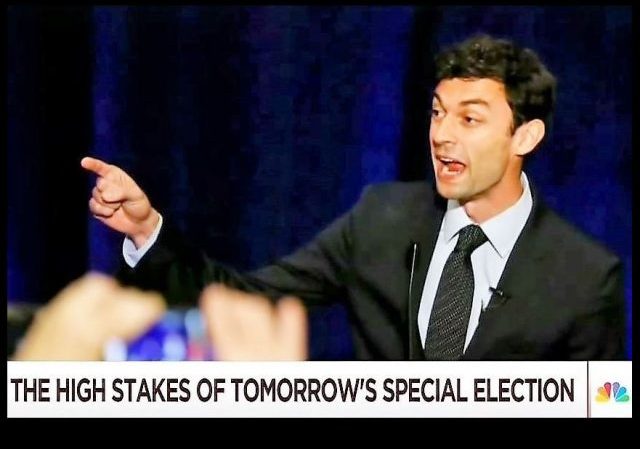 Jon Ossoff has some things going for him in tomorrow’s special congressional election in Georgia. He’s raised a ton more money than his Republican opponent, and the race does appear to have become a referendum on President Trump in a district Trump carried by only 1% in November.

But one thing Ossoff has going against him: his persona doesn’t fit this Southern, suburban district. That was the consensus of today’s Morning Joe panel. Even former Obama spokesman Josh Earnest [now an MSNBC analyst] conceded that, for this district, Ossoff is not a candidate “from Central Casting.”

JOE SCARBOROUGH: I can only speak as a Republican that’s voted in Republican primaries for a long time. Looking at those two candidates, even with my disgust of everything that’s happened in the Trump administration, I know that people in that district like people in my district, like me, would be a lot more comfortable with a 55-year-old Southern Democratic businessman that was cut more out of the cloth of a Jimmy Carter or Zel Miller when he was a Democrat than Jon Ossoff who, Jeremy Peters, I’m sorry, you judge how people look. I joked when I first saw him, and I’m sure —

JOE: He’s a great guy, I joked but there are some pictures where he looks like he could have been a walk-on in Warren Beatty’s “Reds” —

PETERS: He’s got a great head of hair, though.

JOE: A great head of hair. But you never trust people with a lot of hair. That’s what I’ve always said. You know what I’m saying? He doesn’t fit the prototype Southern Democrat —

PETERS: And he doesn’t live in the district, which is kind of a problem.

JOE: If I’m a Republican and I’m angry at Trump for everything he’s done, I still would have trouble — I’m speaking for the people in that district and in my old district — going, am I going to vote for a guy who looks like he might be a Bernie Sanders Democrat?

Now don’t laugh, but Ossoff is running as a fiscal conservative. In essence, a Tea Party body of thought. Now, to the extent the DNC emulates this body of thought, they too will start winning elections. But don’t hold your breath. They, like the RINOs already in Congress, are perfectly capable of wearing the cloak of the Tea Party during the election only to throw it off when entering the halls of Congress.

I was just about to comment the same thing. All of his radio ads either speak about how he wants to cut waste, or they attack Handel for a record of irresponsible spending.

FDR ran as a balanced budget, fiscal conservative against big spender and deficit running Hoover. The myth of Hoover as doing nothing about the Depression was false and FDR expanded on all of Hoover’s wrong headed policies once elected.

notamemberofanyorganizedpolicital in reply to Freddie Sykes. | June 19, 2017 at 4:22 pm

He’s raised a ton more money than his Republican opponent…

IDK, seems like it was just thrown at him.

Yeah, only the locals opened their wallets and gave him those millions…
LOL

Reds was a brilliant movie with a great cast (especially Maureen Stapleton ). The Russian Revolution and all subsequent socialist experiments did not work as well.

The final scene was great, as the disillusioned American snowflake leftists who ran to the USSR to join paradise, but then fearing for their lives, they scurried like rats to Europe, leaving millions behinds to die at the hands of Lenin and Stalin.

Of course, they probably settled in California, trying now to turn the state – and our nation – into the same rathole their ancestors ran from, with great experiments like ‘barack hussein obama’ (or whoever the hell he really is.)

Were ossoff and paul ryan separated at birth?

I know they have shed their inconvenient spouses and will soon be wed. Good luck Joe. She sounds like your mother. And, kind of a nag.