Raising a generation of activists.

We’ve been reporting on the horrific results of decades of progressive higher education, and while it’s one thing to connect the dots and understand that radicals in academia are influencing college students, it’s quite another to see how the sausage is made.  The National Association of Scholars (NAS) has released a study that concludes that college common reading lists are designed to make activists, and it’s quite fascinating to see the curtain pulled back.

The NAS study demonstrates that the nation’s common readings list is “designed to indoctrinate students with progressive propaganda.”  The assigned books all share common traits:  they are non-academic, adhere to a single political agenda (progressive), are parochial, homogenous, and mediocre.

The NAS describes itself as follows:

NAS is a network of scholars and citizens united by our commitment to academic freedom, disinterested scholarship, and excellence in American higher education. Membership in NAS is open to all who share our commitment to these broad principles. We publish a journal and have state and regional affiliates.

The National Association of Scholars upholds the standards of a liberal arts education that fosters intellectual freedom, searches for the truth, and promotes virtuous citizenship.

Their Beach Books study examined the summer reading list provided to the incoming freshmen of hundreds of American colleges and universities, and the results both confirm our worst suspicions and provide a means of taking back at least this part of our nation’s higher education.

The study examined 348 colleges and universities for the academic year 2016–2017 and found the following commonalities:

Findings from the study revealed that most colleges chose books that are:

Colleges and universities do not just happen to pick progressive propaganda for their common readings; it is hard-wired into the structure of the common reading programs, NAS found. NAS director of communications David Randall, the author of the report, said, “common reading programs can choose better, more challenging, and more intellectually diverse books—but only if they change their mission statements.”

In other words, the common readings programs are specifically designed to promote progressive propaganda over the academic goals one might expect in higher education.  The progressive agenda is baked in from the start.

Common reading programs usually try to satisfy more than one mission at once, to meet both academic and non-academic goals. This is never a good idea: if you try to teach two things at once, you’re not likely to do either well . . . .

Georgia State University uses its First-Year Book Program to “raise awareness and tolerance of cultural likenesses and differences” and to “create a sense of community.”

The University of Louisville’s Book-in-Common “promotes self-discovery and exploration of diverse ways of thinking and being.”

. . . [T]hese non-academic goals also serve as euphemisms for the more politicized goals of common reading programs. A very large number of common reading programs—probably a large majority—combine the intellectual goals of sparking interest in reading and preparing students for college-level reading with some other non-academic goal, such as building community, diversity, or identity.

Because common reading mission statements have more than one goal, the incentive is to compromise on at least one of them. The mediocrity of common reading choices bears witness that selection committees usually make a priority of the nonacademic goal. [emphasis not mine]

NAS notes that the themes and subject matter of common reading assignments are increasingly clustered around a few set areas. 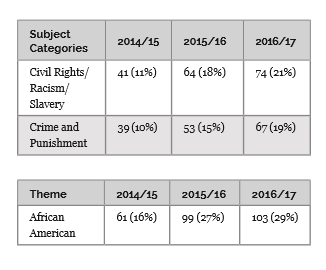 This clustering effect within a few select subject matters and themes reduces the intellectual diversity of the common reading genre as a whole. It also has the effect of reducing intellectual diversity within each subject category and theme. An astonishingly large number of the colleges and universities that wish to introduce students to the African-American experience have selected a homogenous handful of contemporary works . . . .

Following is a table of the top books for common reading for the 2016-17 academic year: 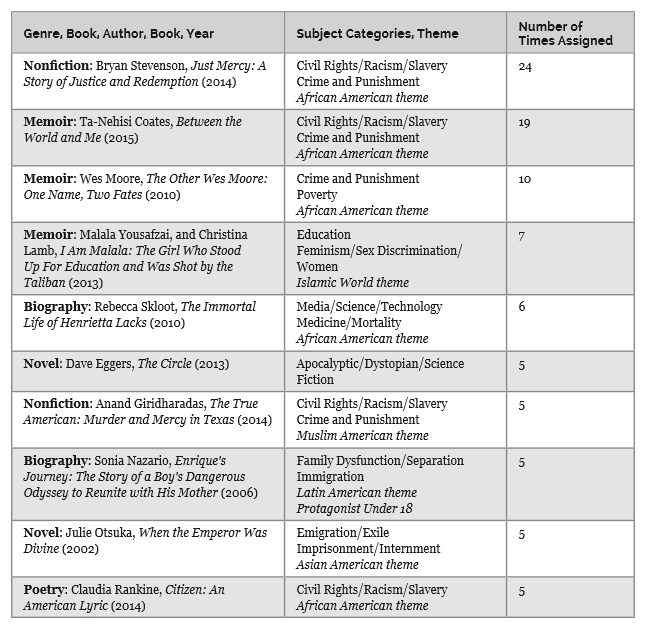 This is no accident.

NAS found that common reading mission statements explicitly state that their goal is to promote a progressive agenda.

The aforementioned table (via NAS): 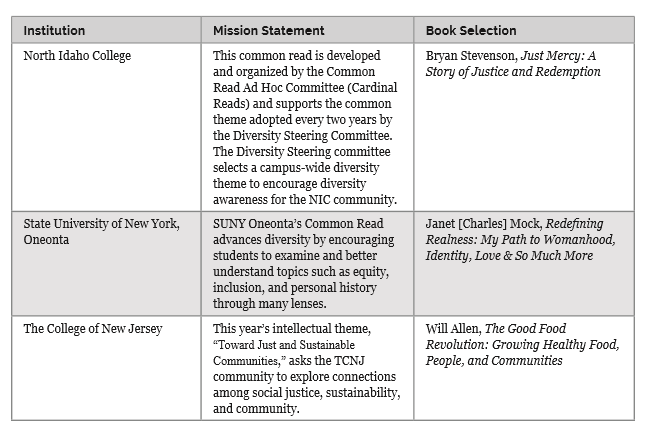 NAS warn that these problematic common reading lists are not merely a product of higher education’s progressive political culture, but are derived largely from the administrative structure.

Common readings are not just the product of a progressive political culture in higher education. They are particularly the products of progressive advocates within these institutions, concentrated in “co-curricular” bureaucracies—Orientation, First-Year Experience, Student Affairs, Office of Diversity, Office of Sustainability, Residential Life, and so on.

They are also the product of mission statements that direct committees to choose books to form “community,” or meet other nonacademic goals, rather than to focus on introducing students to college-level academic standards. The progressive politicization of common readings largely derives from this administrative structure.

The NAS makes a number of recommendations for changing this trend, including recommending 110 books they deem more academically-oriented, placing faculty rather than administrators in charge of the common reading selections, and urging donors to withhold donations until such changes are enacted.

Maoism on the march in America.

This may not be the creeping menace that it appears.

Is there any documented case of a student actually reading anything on the Summer Reading List?

This is probably more a program for some in the swelling ranks of school administrators to pretend that they’re doing something useful. And resentment that they have to work during the summer while those damn students are off is probably enough to ensure that they select the most deadly reading material available.

These days I don’t see much evidence that they would comprehend it if they did read it. Literacy ain’t what it used to be.

Good points. The student will receive an “A” regardless of whether he reads anything. All he needs to do is give the “right” answers in class. The book lists simply help support the leftist writers.

The danger is in the classroom where these leftist instructors rant and shut down all resistance to the party line.

I wonder if summer reading lists are a relatively new phenomenon. When I was a college freshman lo these many moons ago (36 years to be precise), I never encountered a summer reading list, nor do I recall any of my friends getting one – not even at the high school level.

The only “summer reading” I encountered a long time ago (40+yrs) was related to the classes I signed up for the previous spring. And it was reading the intro chapters so the professor would have something to talk about the first day of classes. Actually, he was able to put fear into our souls since he picked on students to talk about the topic. Everyone was ready the next class.

I hope you guys are right. Be prepared if you aren’t.

I would have no problem if kids read all sorts of Leftist junk, if they also read (actually read, mind you) Thomas Sowell’s “Basic Economics” and Milton Friedman’s “Free to Choose.”

It was “Free to Choose” that turned me from a liberal to a conservative. I’ve probably linked to this before, but I have a blog post on How I Became a Conservative ( http://www.unshackledaction.com/single-post/2016/07/18/How-I-Became-a-Conservative ). It includes a link to the first episode of the PBS series on “Free to Choose.” That was all it took for me to see how my liberal worldview did not conform to reality and actual human nature. All my liberal notions were just so much b.s. designed to help me avoid confronting reality. Now liberals have additional tools to do this like safe spaces, micro-aggressions, cultural appropriation, victimhood, hate-speech, “mostly peaceful” demonstrations and more. But they are not merely hiding from unpleasant views, they are hiding from reality.

This is merely the tip of the iceberg. Earlier this year the NAS issued a report on how “social justice” indoctrination now permeates college-level studies across a variety of subjects.

This is what happens when responsible adults naively, trustingly hand their children over to leftist “experts”, with no idea what those experts may be teaching young Americans.

When I had my triennial observation last year, there was some gobbledygook about intercultural/global something or other that I was supposed to be evaluated on. But it was a relatively new category for observation, and it was sufficiently vague that I was effectively able to ignore it. I just put down that I taught math, not sociology or international studies, and left it at that. With any luck I will have transitioned into another career before they clarify what indoctrination they want us to push.