The most singles titles at a Grand Slam. 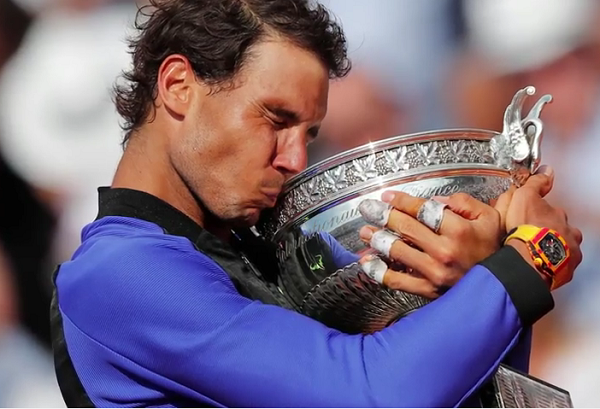 It is the most singles titles one person has won at a Grand Slam. From The New York Times:

“I try my best in all events, that’s the real thing,” Nadal said. “But the feeling I have here is impossible to describe and difficult to compare to another place. For me the nerves, the adrenaline that I feel when I play in this court is impossible to compare to another feeling. Just for me it’s the most important event in my career without a doubt.”

The victory capped what can be rightly seen as Nadal’s most dominant performance at Roland Garros. He did not drop a set in his seven matches and lost a total of 35 games, the second fewest by any Open era men’s champion at any Grand Slam event in which all the matches were best-of-five sets.

Bjorn Borg, the pokerfaced Swede who was the best men’s claycourt player in history until Nadal’s emergence, dropped only 32 games en route to the 1978 French Open title.

Sunday’s victory also ended a three-year drought of major titles for Nadal, who won his ninth French Open in 2014 before being superseded by Novak Djokovic and slowed by injuries and dents to his confidence.

This season he has returned undeniably to the fore: dropping weight and recovering all the sting in his fearsome forehand.