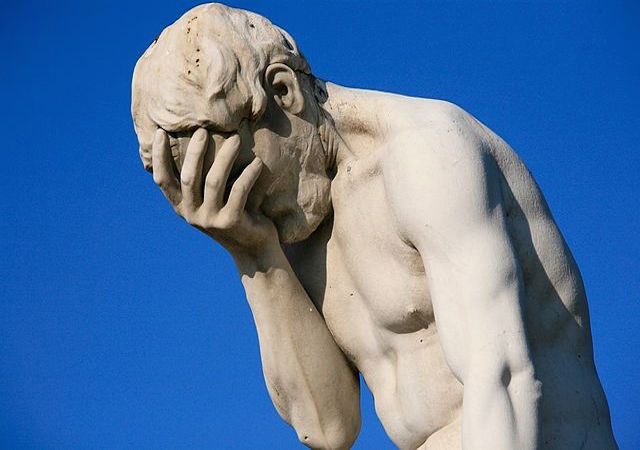 Does this mean that black and white photography promotes racial equality? What other colors in art have sinister hidden messages?

Professor Sarah Bond demonstrates in an article published in Hyperallergic that “many of the statues, reliefs, and sarcophagi created in the ancient Western world were in fact painted,” meaning the “white marble” often seen in such pieces of art were intended to be colored.

Consequently, Bond argues that “the equation of white marble with beauty is not an inherent truth of the universe,” and is thus “a dangerous construct that continues to influence white supremacist ideas today.”

Bond goes on to point out that “most museums and art history textbooks contain a predominantly neon white display of skin tone,” which “has an impact on the way we view the antique world.”

“The assemblage of neon whiteness serves to create a false idea of homogeneity — everyone was very white! — across the Mediterranean region,” she adds, later stating that misconceptions of the classical era provide “further ammunition for white supremacists today, including groups like Identity Europa, who use classical statuary as a symbol of white male superiority.”

“It may have taken just one classical statue to influence the false construction of race, but it will take many of us to tear it down,” Bond concludes. “We have the power to return color to the ancient world, but it has to start with us.”

Bronze statues contribute to black supremacist tendencies and should be banned as well in the interest of equality and diversity. And Chinese jade art contributes to a Marian supremacist ideas, of course.

Lily white professors, such as Sare Bond and Robin D’Angelo, have made quite a career out of their own self loathing.

As a Caucasian I have always been appalled by the “white supremacy” concept, having never presumed to be superior to any group based on ethnicity. Certain individuals? Certainly, but not whole groups. However, there has been so much blathering about it, topped of by this statue business, that I had to root around and make sure I wasn’t guilty of that particular sin.

Lo and behold, two shocking things were discovered! First, I could find no evidence of being personally infected with the ill of “white supremacy”. Second, research into the subject made me realize that there really is a modicum of truth in the idea. Our entire Western civilization is almost entirely the result of white Europeans and their descendants! Radio, television, computers, cars, refrigeration and air conditioning, microwaves … the list of the inventions that make our world the extremely comfortable place that it is … are all the result of the work of white Europeans! Even our way of life and form of government, not perfect but still the most enlightened and free in the world, are built on the ideas of white Europeans. I’m not saying that other groups haven’t contributed, but the vast majority of what makes our civilization what it is can be attributed to white Europeans!

So, while “white supremacy” is still a myth in my opinion, there is much evidence that we have performed and produced more than other groups. However, our “day in the sun” appears to be ending as our Asian brethren are supplanting us in both categories. At some point in the future, quite possibly the near future, the easily offended will probably be complaining about “yellow supremacy”. (With apologies to my Asian acquaintances.)

They already do, through what I call “the soft bigotry of high expectations,” resulting in zero aid as given to the preferred racial groups.

Is it now required that you must take stupid pills before being allowed to teach at some colleges?

You can’t possible listen to all the crap coming from the leftists without feel a little bit better about yourself. I don’t think it goes to white supremacy, but I do feel a little less stupid for having backed my truck into a telephone pole.

I saw the headline and my mind immediately said: “female professor.” Yup.