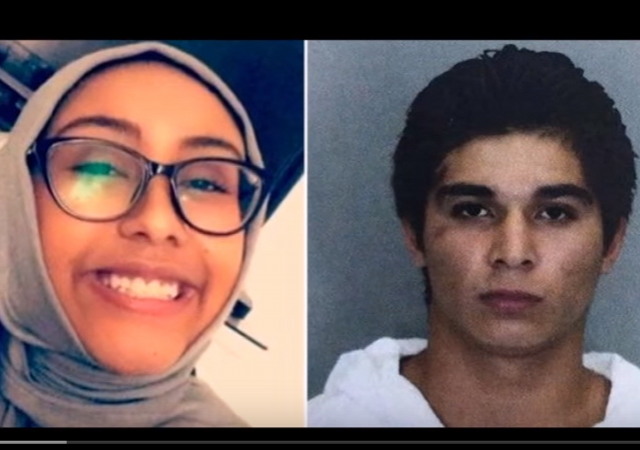 When a teenage Muslim girl was killed in Virginia recently, some people speculated that it could be a hate crime due to her religion. It turns out however that the suspect is believed to be an illegal immigrant who was triggered by road rage.

Road Rage Leads to Murder of Reston Teenager: Evidence in case does not point to hate crime

An autopsy this afternoon revealed the body recovered from a pond in Loudoun County is that of a Reston teenager who went missing early Sunday morning. The victim has been identified as Nabra Hassanen, 17, of Reston. The autopsy results show Nabra suffered from blunt force trauma to the upper body after a road rage incident. Darwin Martinez Torres, 22, of Sterling, is charged with her murder.

The preliminary investigation reveals at about 3:40 a.m. on Sunday, a group of as many as 15 teenagers was walking and riding bikes on Dranesville Road. The group of teens had been attending an overnight event at a mosque, the All Dulles Area Muslim Society or ADAMS Center, and had left to go to a fast food restaurant. As they were returning to the mosque, some were on the sidewalk and others were on the road itself.

Detectives believe Torres came upon the teens while he was driving. The investigation reveals a teenaged boy on a bike began arguing with Torres. Torres then drove his car onto the curb as the group scattered. Witnesses say Torres caught up with them a short time later in a nearby parking lot and got out of his car armed with a baseball bat and began chasing the group. Torres was able to catch Nabra. His anger over the encounter led to violence when he hit Nabra with a baseball bat. Torres then took Nabra with him in his car to a second location nearby in Loudoun County.

Here’s a video report from NJ.com which acknowledges that it wasn’t a hate crime but includes stats about hate crimes against Muslims anyway:

A man has been charged with murder after police say he killed a 17-year-old Reston girl whose body was found in a pond hours after being reported missing during an early morning incident in Virginia.

Fairfax County Police say the victim, Nabra Hassanen, was with a group of teenagers of about 15 people walking and riding their bikes along Dranesville Road from a McDonald’s restaurant at around 3:40 a.m. Sunday. The group got involved in a dispute with the driver of a vehicle after they attended an overnight event at the All Dulles Area Muslim Society (ADAMS) Center.

Police say a teenage boy got into an argument with the driver, identified as 22-year-old Darwin Martinez Torres. He ended up driving his car onto the curb as the group scattered. Witnesses say Torres caught up with them later at a nearby parking lot and got out of his vehicle, chasing them with a baseball bat.

According to police, Torres struck Hassanen with the bat. Torres then put her into his car and took her to another location in Loudoun County.

Some people just can’t let go of the narrative. Petula Dvorak writes at the Washington Post:

Nabra Hassanen’s death may not legally be a hate crime, but it sure feels hateful

That’s the bottom line. And it is rotting our country, no matter what flavor or shape it comes in.

The killing of 17-year-old Nabra Hassanen, whose body was found in a pond near her mosque in Northern Virginia after some sort of encounter with a motorist, is not being investigated as a hate crime, officials said Monday.

Officials are saying it’s being investigated as a road rage incident.

A hate crime, as we understand it, fits into a tight, legal narrative. It’s a crime motivated by prejudice — whether it’s based on race, religion, gender or sexual orientation.

And so far, investigators do not believe Nabra was picked out, targeted and killed specifically because she was a Muslim wearing an abaya, walking to her mosque. And it seems that she was not killed simply because she was a young woman walking outside in the darkness.

What were these kids doing out riding bikes at 3:40AM? …or was that a typo?

There was an all night event at the mosque but a group of kids left to go eat. I’m surprised that it was a mixed group and without an adult at the time.

The killer appears to be an illegal alien. So, does he get deported before or after serving whatever prison time for the killing? I would hope after doing time, otherwise he could just return to the US to kill again.

Hopefully he’ll be deported in a pine box. Virginia is a capital punishment state.

The victim was not particularly religious, and had to borrow a robe from her mother because she didn’t have one of her own. I assume her companions were similar, not very religious but willing to go to the mosque event to hang out with their friends. I also assume the mosque provided a pre-dawn “breakfast”, but they decided they’d rather go for McDonald’s.

It’s Ramadan. They were going as a group to a restaurant for a meal before daybreak and the requirement to fast. They weren’t doing anything wrong.

The 15 minors violated a City of Fairfax curfew ordinance by being out at 3:40 AM. That curfew is meant to keep those kids safe. The adults in charge of the event also violated the curfew by allowing the children out. Most businesses, such as skating rinks, go to great extent to keep minors inside when they run all night events so as to provide a lawful event.

This is not to excuse this criminal’s inexcusable vicious act, but there is still too much about this incident that is unknown for you to make the assertion that the girl was doing nothing wrong. We have no idea of the context of the dispute was that lead to this event. Were the teens minding their own business walking peacefull on the sidewalk or were they all over the road posing a hazard to themselves and drivers? Did the criminal have to swerve to miss them and then endure threats against himself, or was he the sole aggressor. Obviously, he would be a murderer after coming back to the scene with a weapon but I would like a little more information to put it into context.

I’ve seen a few stories that suggest that some of the males were on bikes, in the road, and insulting the driver.

You also have to wonder if the police gave a alcohol test to the driver since he was also out at 3 am. Growing up in a different culture, possibly drunk, and other questions about behavior might show that this was a road rage incident that escalated to hitting the nearest person, then kidnapping and killing.

At least he has been charged with murder.

If we enforced our laws this monster never gets into the country or gets deported and there’s a good chance this murder never happens.

Shouldn’t the media and Dem narrative (really the same) be that this “climate” created by Trump and all his anti-immigrant racist followers is causing such angst that blow ups like this are becoming more common and should be partly excused? If I read Salon or Slate I might have already seen that meme.

Why don’t you go look? Then come back and tell us what you found.

Are you old enough to drive?

If this homicide had truly been a “hate” crime, she would be more dead than her current ambient state.

While I find every murder “hateful” the definition of a “hate” crime doesn’t fit this incident. However it fits the liberal narrative so they will use it.

Truth no longer matters to a large portion of the media. What fits their narrative, what advances their ideology is what is important. They and their agenda endangers us all.

It’s an illegal alien, apparently they are a notch above Muslims in the lefts mind.

There were 15 kids and no one helped her?

In the Daily Caller article about this murder, it says that the Muslim kids were walking in a large group and didn’t realize at first that she wasn’t still with them.

Sorry, in this day and age with all the crazies out there you don’t let a bunch of kids wander around town in the middle of the night. Religious observance or not. They should have had an adult with them.

Oh, garbage. There are fewer crazies around, and the streets are a lot safer, than when most of us were teenagers, going around with our friends and definitely not wanting any adults with us.

The streets are a lot safer? Yeah, wander around Chicago at 3 AM and let me know how you do.

Chicago is safer now than it was 40 years ago

Now THAT is a scary thought.

Once again, illegal immigrants are “needed” in this country to do the “hate-filled-Conservative-nativist-backlash-against-Muslims” killings that ordinary American citizens won’t do.

Chasing down with a baseball bat… That poor girl.

Murderers (without the hate crime sticker) are scary, not sure why liberals don’t get that.

An illegal alien murders a Muslim. Two protected groups. Who do the dems support? Obviously they will blame it on Trump. The illegal alien was stressed over the possibility of being deported which caused temporary insanity. The dem solution would be to admit more illegal alien gangbangers to make him feel more comfortable.

Protected groups? Then why don’t you convert to Islam and become a member of a protected group. You, too, can enjoy all the privileges of the a fore mentioned. I wouldn’t want you to be uncomfortable.