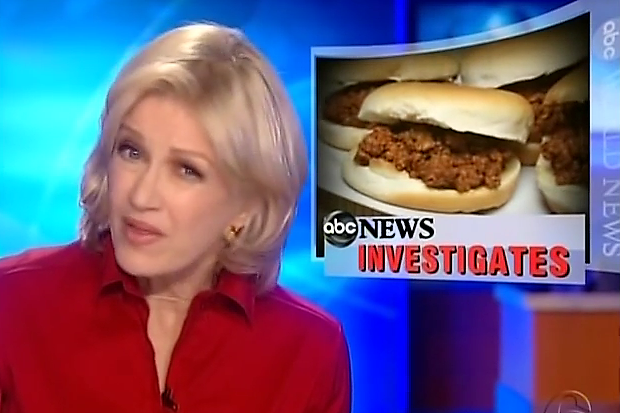 In 2012, ABC News aired a report that FDA whistleblowers were sounding the alarm over the contents of much ground beef for sale in America.  According to the ABC News report, a “processed meat product” is treated with small amounts of ammonia and used as filler in the nation’s FDA-approved ground beef.

Beef Products Inc. responded by filing suit against ABC News for food-libel and defamation, with the trial scheduled to begin this week.

Opening statements in what could be the largest defamation case in U.S. history are set to begin Monday in a South Dakota courtroom.

In suing ABC News for its coverage of a widely used processed-meat product that the news organization and others have branded “pink slime,” Beef Products Inc. claims it was a victim of a journalistic hit job. The family-owned South Dakota meat processor claims the reporting reduced its revenues.

. . . .  The company filed suit . . ., accusing ABC of creating a false impression “that BPI’s product was not beef or meat, had little or no nutritional value, and was not safe to eat.”

Beef Products says the product, called lean finely textured beef or LFTB, is merely the result of discovering how to extract more lean beef from cows. Approved by the U.S. Department of Agriculture in 1993, LFTB is made from beef trimmings put through centrifuges to remove fat. Some LFTB is treated with tiny amounts of ammonia gas to kill pathogens.

In the wake of ABC’s reports, Beef Products says its sales plummeted and ground-beef processors canceled orders in droves, forcing the company to lay off 700 workers. Less than three weeks after ABC’s first report, Beef Products suspended operations in three of its four processing facilities.

. . . . In addition to its defamation claims, Beef Products is suing under South Dakota’s Agricultural Food Products Disparagement Act, which imposes liability for knowingly publishing false information that asserts or implies that an agricultural food product isn’t safe for public consumption. South Dakota is among more than a dozen states that have enacted “food libel” statutes intended to shield the food-production industry from bogus safety scares.

Good. They should pay through the nose for this, just like NBC had to pay GM for faking a truck explosion. The whole point of the program was to convince people that “pink slime” is not real meat, is some kind of synthetic product, and is somehow bad for you, or even dangerous. They knew perfectly well that this was not true, and they knew what sort of impact it was likely to have on the plaintiffs, they just didn’t care. That is the definition of “actual malice”.

Wait, wasn’t this the same network and same correspondent that got their ass handed to them by Food lion 25 years ago? (google, google, google)

And *that* was a hit job on behalf of the UFCW grocery union after they couldn’t get a 30% card check passed. ABC only got out of a libel suit because they fought discovery long enough for the statute of limitations to expire. Got them on trespass and fraud, and successfully showed that the segment was libelous. There was a refutation documentary that aired sometime in the 90s, I remember watching it.

…and then Food Lion was bought out by the Belgians.

They were bought by Delhaize in 1974.

But the damage was done. Food Lion hasn’t been able to grow, and in fact has shrank, in the last 25 years.

Another sad thing: Food Lion eventually got nothing from ABC. the 4th circuit threw out the conviction because it felt they were going for a tort instead of libel because libel was too hard. They couldn’t go for libel because ABC held the evidence back for so long.

Food Lion lost $1.5 Billion in stock value in the week surrounding the first airing, and $4.6 Billion in sales over the next 18 months. ABC made millions in ad revenue, and paid not a single dime in restitution.