One of the many perils of too much government: the belief government is necessary for happiness

One of the many perils of too much government: the belief government is necessary for happiness

Mark Steyn’s advice? Get a life. 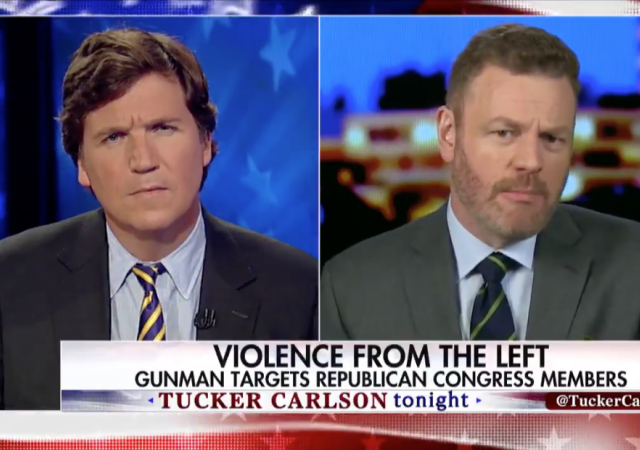 Trump’s election has brought out the worst in half of the country. We’ve chronicled much of it.

Rather than accepting Trump as president, we’ve seen attempt after attempt to delegitimize the Trump presidency and the undermining of each and every policy initiative.

I’ve long said that all the minutia aside, the fundamental difference between the American left and the American right is the belief in the proper role of government in the lives of individuals.

When government is placed in a station of necessity and the god by which a majority life’s chores must first be approved — internet usage, check-ups, dietary recommendations, educational decisions, etc. — it’s not terribly surprising that so many have lost their ever loving minds that their government god no longer agrees with their priorities.

Mark Steyn joined Fox News’ Tucker Carlson last night and spoke directly to this issue. His advice? Get a life.

“Get a life. If the person you want didn’t make it to president, tough. You can have another go in four years,” said Steyn.

.@MarkSteynOnline: "If the person you want didn't make it to president, tough. You can have another go in four years." #Tucker pic.twitter.com/4eUWAc4JOh

“One of the many perils of too much government: the belief government is necessary for happiness”

Nearly had it…..if it had been less governent is necessary for happiness…you would have had me.

It’s a spoiled child syndrome, where the government is a surrogate sugar “daddy”/”mommy”.

That said, there is a practical and rational scope to the government established by American conservatives.

More and more people are of the belief government owes them a living through free healthcare, free education, subsidized housing costs, and a universal minimum wage in an unsustainable amount even if they are not working. If one calls oneself an “artist,” life should be totally free to pursue their artistic vision.

To these people, government provided happiness is a responsibility free lifestyle that is owed to them. They actually believe “I’m from the government and I’m here to help.” is a good thing. All of this is based on a parasitic economic theory founded upon combining “The IRS” into one word to spell “Theirs.”

The reactions are more complex to me. They are fed partly by the big government priority. But there is also a lot of fuel coming from a more personal place in a way similar to the hatred of a sports team and every on of its players and especially its supporters. To BoSox fans every Yankee is bad, etc. When you side looses the negative passion increases. With progressives that has become even more visceral, perhaps because the losses have been accruing over the last 6 years or more.

And it may have metastasized to a point where the loss is all that matters. Hence no interest in debating merits any more.

Government, even in its best state, is but a necessary evil; in its worst state, an intolerable one.

What our founders fought and died for:

Life, Liberty, and the Pursuit of Bigger And Ever-More Intrusive Government

Many of the whiners this go round are pointing out the “whining” of the GOP last round. The response to this is simple: last go round, you didn’t call conservatives mere whiners…you called them homophobic racist deplorables (hyperbole etc), and you still haven’t learned what those words mean.

Yeah, thank God the Republicans control everything. That explains why ObamaCare was repealed, why the wall is well underway, why we have returned to regular order in Congress, why we have a real budget for the first time since 1997, why taxes have been cut,…..

Sorry, I thought we won the last election.

“Get a life. If the person you want didn’t make it to president, tough. You can have another go in four years… OR NOT!