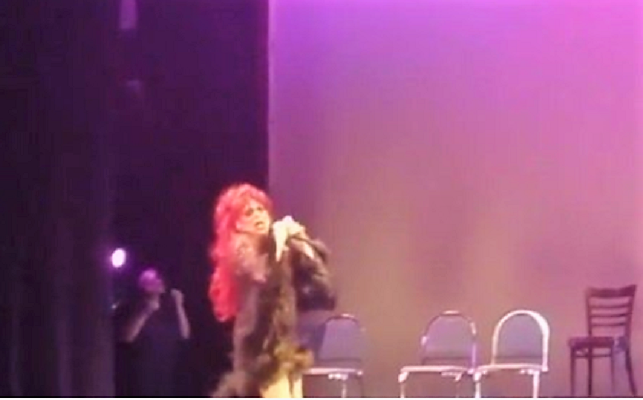 Parents of children as young as five were horrified when their elementary school district’s talent show was capped off with an adult man gyrating in drag to a song by Iris Chacón.

Families at a Manhattan public school talent show got an unexpected lesson in human sexuality when a grown man took the stage in a black, sequined dress and flaming red wig and performed a raunchy drag number where he grinded the stage and spread his legs.

The official public school Learning Expo held May 25 in an auditorium at the Museo del Barrio was billed as a talent show for students from across Manhattan’s District 4 to show off what they learned in school.

But at the end of the two-hour event, parents and kids as young as 5 were shocked when a man identified as Public School 96 Parent Association President Frankie Quinones took the stage and did an explicit lip-synch performance of a song by the campy 1980’s Puerto Rican music sensation Iris Chacón.

[The emcee District 4 Superintendent Alexandra] Estrella introduced the final act of the night, billed on the event flyer as a “Special Surprise Performance!”

What followed is described as “like a nightclub performance.”

“People were horrified,” said Raquel Morales, who was at the event with her son, a fifth-grader who attends a public school in District 4. “It looked like a nightclub performance. I’ve been asking for an apology from the district for the last week, and they’ve been ignoring it.”

Morales said about 200 families at the evening talent show took in student art and writing exhibits from schools across the district, including Public School 83, River East Elementary School and PS 96.

. . . .  A PS 96 parent who requested anonymity, for fear of reprisal against her children, said she blamed Estrella and PS 96 Principal David Pretto.

“I left the show the minute he started sticking his tongue out. I had my children with me and I wasn’t going to allow them to see that,” the irate mom said. “It was a very poor presentation of Iris Chacón, anyway. She was not like that.”

Pretto declined to comment at the school and neither he nor and Estrella responded to requests for comment. Quinones couldn’t be reached.

welcome to indoctrination… er, its ok-a-tion

This skates perilously close to Child Endangerment, and was quite clearly inappropriate. At the least this guy should be removed from his position with the Parent’s association.

Nothing makes for a fun story time like beads, boas, and books! Chicago’s finest drag queens will help us celebrate Pride month by reading their favorite stories to younger readers. For kids up to age 14.