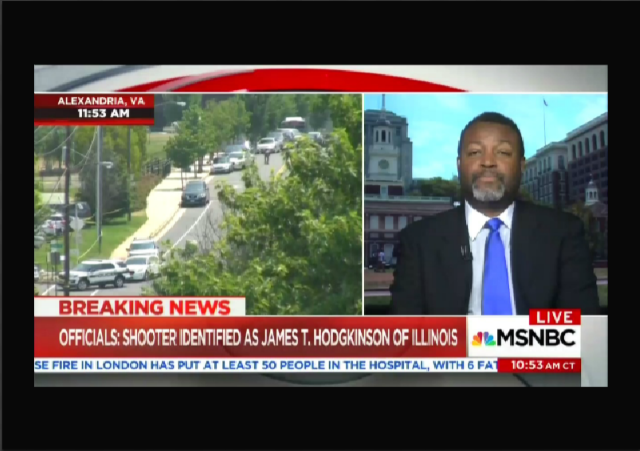 You knew the MSM would turn the shooting of Rep. Steve Scalise and others into a gun-control story.

“The most important thing that we need to understand from this is, this is what happens when you have an over-proliferation of guns. And it’s to be expected to a certain extent.”

There is a grim irony here. Nance, a man MSNBC chose to comment on what was apparently an anti-Republican suicide attack, not long ago publicly called a Trump property in Turkey his “nominee” for “first ISIS suicide bombing of a Trump property.”

Why does MSNBC continue to have Nance on as its terrorism “expert?”

I blame it on an over-proliferation of left wing nut jobs.

They’re just blaming the gun because, you know … it’s black!

I see what you did there. 😉

Seriously, though, they’re blaming the gun because the shooter was one of their own — just like the VAST majority of other unhinged shooters. Even the domestic Islamist terrorists overwhelmingly tend to be Democrat voters.

If the shooter had been a right-winger, TEA Party-er, or NRA member, you know they’d be ALL over that.

In gun-blog circles, a common question is, “Why are liberals so violent?”

It’s not a rhetorical question or a joke, and it seems to particularly apply to anti-gun liberals.

No, [email protected]$$, it’s due to over-proliferation of violent leftist thugs within what remains of the Democrat party, egged on by the MSM.

The perp was one of your boys. Clean your own house, [email protected]$$, and purge your party of its fascist extremists before you start whining about conservatives and gun owners.

They can’t. The Left needs violent whackjobs to commit violent crimes so they can exploit it to push for more control. If there is no violent crime — if there are no victims or “blood in the streets” — then there is no need for more government to “solve” it.

In short: The violence is required to push The Narrative (TM).

Of course, it would work better for them if said whackjobs were right-wing NRA-card-carrying White Christian TEA Party members…

… but they’ll take whatever they can get, even from their own house. They just need the violence and its associated victims.

That says something about them and The Narrative (TM), doesn’t it?

I’m a bit unclear on the math here. It seems to me that one gun is sufficient for “this” to “happen”. The other 299,999,999 or so guns in the country (what I presume he means by “over-proliferation”) have nothing to do with it.

Ditto for shooters; one leftoid whackjob is sufficient for “this” to “happen”.

As the late firearm trainer Col. Jeff Cooper pointed out, “The media insist that crime is the major concern of the American public today. In this connection they generally push the point that a disarmed society would be a crime-free society. They will not accept the truth that if you take all the guns off the street you still will have a crime problem, whereas if you take the criminals off the street you cannot have a gun problem.“ [emphasis added] (ref)

The media tells us that lawful guns and gun owners are the problem, but there’s no correlation — none — that more lawful guns means more crime. And although correlation doesn’t imply causation, you cannot have causation without correlation.

Trust me: in a country with (conservatively) 80-100 million gun owners and 250-300 million legally-owned guns, if the law-abiding gun owners were the problem, you’d know it.

Well, you know what they say about the word “expert”… 😉

“Why does MSNBC continue to have Nance on as its terrorism “expert?”

Answer is because Nance is an Affirmative Action Black, and contributes to MSNBC’s Diversity and Inclusion.

Heck, has anyone ever wondered why people like Maxine Waters or Sheila Jackson Lee are in Congress?

Yep, this is what happens when you have so many homeless guns wondering the streets alone, they end up getting in trouble. They need a firm steady hand to guide them! Any guns that are alone in need of a home can come see me, I will help! We need to get these guns some loving humans to take care of them. Please Help!

This PSA has been brought to you by a sarcastic gun loving ass.

If you are blaming the gun then your IQ is probably not above room temp. and no one should be calling you an “expert” in anything.

Gremlin, I may have to borrow this! If you run out of room for these orphans, I have some extra room.

Is this the same expert who said the Podesta emails were obvious fakes. The expert who didn’t know about the codes on the emails. Calling it “black ops”. He’s an idiot.

The Democrat Governor of Pennsylvania Terry McAuliffe said that 93 million people are killed every day with guns because he knows the democrat base will believe anything higher-up Dems will say.

Jonathan Gruber, architect of ObamaCare, describes their base as stupid and how it was so easy to pass ObamaCare. All high level Democrats know this and say outlandish things to rile their base.

Hopefully, their base may come to realize how the DNC takes advantage of them.