Should we rely on the conjectures of people who still refer to Russia as “the Soviet Union”? 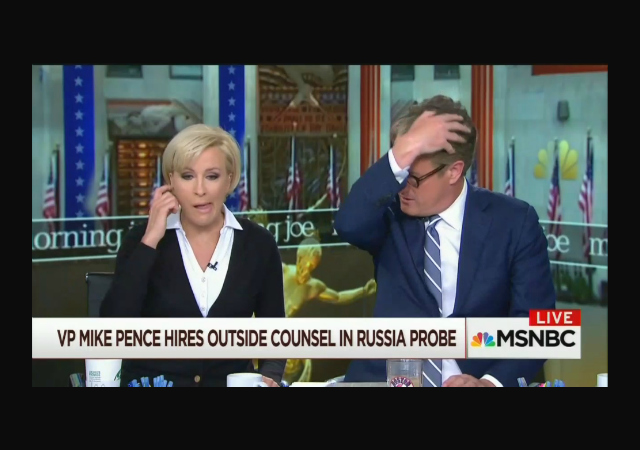 When in the market for political prognostication, I always like to rely on the conjectures of ad men who still refer to Russia as “the Soviet Union.”

On today’s Morning Joe, Donny Deutsch labeled President Trump a “sleazy businessman,” and said that “financial wrongdoings with the Soviet Union” will “bring this presidency down.”

For good measure, Mika Brzezinski and Joe Scarborough got into a [made-for-TV?] squabble over the significance of the hiring of a lawyer by Vice-president Pence. Joe cast hiring a lawyer as nothing more than a sensible move, even by people who are aren’t “close to being guilty.”

But an agitated Mika insisted that we shouldn’t “pretend this is normal. The Vice-president hired a lawyer!” Looking for support, she turned to a panelist: “Mark Halperin, please!!”

Oh, to be a fly on the wall at dinner between this engaged couple.

DONNY DEUTSCH: Donald Trump, historically, is known as a sleazy businessman. When you dial back the reality that he could not borrow money from US banks, when you dial back the reality that his sons have said what they have said. Follow the money. What will bring this presidency down is not tampering in this election, it will be financial wrongdoings with the Soviet Union. I’m saying that with restraint.

JOE SCARBOROUGH: [facetiously] Thank you very much for being so restrained.

JOE: “Bringing this presidency down” is Donny restrained. I mean, come on.

JOE: We said several weeks ago, anybody in this cabinet, anybody in this White House, anybody who was on the campaign for a long time, should be smart and should hire a lawyer. Everybody in Washington, DC. that’s been through this process, that wasn’t close to being guilty, hired a lawyer. It’s what you do. So when people see this, media shouldn’t report this as if this is the beginning of the end, and everything’s crumbling.

MIKA: No, actually I’m trying to level you out. You’re acting like you just scratched yourself. I mean, it’s not like, eh, he got a lawyer, let’s move on. In other news, flowers grow. I mean, come on!

JOE: I said this several weeks ago.

MIKA: I know! It doesn’t make you prescient.

JOE: If you’re in the White House, you need to get a lawyer.

MIKA: It makes you knowledgeable about how bad this situation is.

Karl Marx implied that peace will ensue only after all opposition to Socialism has ceased.

“What will bring this presidency down is not tampering in this election, it will be financial wrongdoings with the Soviet Union.”

This is what abject surrender and the collapse of a narrative looks like.

notamemberofanyorganizedpolicital in reply to clintack. | June 16, 2017 at 4:37 pm

“Financial Wrongdoing with “Soviet Union” Will “LOCK UP” HILLARY CLINTON!

The Swamp has a nearly unlimited supply of BS.

Has Trump ever been tried, let alone convicted, for any financial crimes? No? Then accusing him of crimes is libel per se, and I don’t think it would be hard to prove Douche acted with malice.

And, really, “Soviet Union”? It’s been close to 25 years since it collapsed.

Besides, no one on the left cared when it was proven Ted Kennedy climbed into bed with the actual Soviets to oppose Reagan. They’ll celebrate that murderous traitor, but want to kill Trump?

Trump has certainly been accused of crimes, probably with justice. E.g. in the “Trump University” scam it’s hard to escape the conclusion that he personally engaged in fraud.

In any event, accusing him of crimes in general, rather than any specific crime, would not be libelous. And you should look up the definition of “malice” in public-figure defamation law; it doesn’t mean what it does in ordinary English.

Once again I have to ask why you’re giving these sleazebags publicity? Low hanging fruit? Easy pickings? I don’t watch their show, don’t care about their opinions and don’t understand why you do. Aren’t there more important things to write about?

Reminds me of some of the BS I hear from my kids when they get caught with their hand in the cookie jar, evolving stories abound.

First, it was “Russia influenced and stole the election by tampering and hacks”. But Obama said three times before departing that there were not voting systems hacked into and no votes changed.

Second, it was “Trump was colluding with the Russians”. But the DOJ says they’ve know since last year this wasn’t the case and the FBI had already told congress.

Fourth, it’s “Trump was wrong to fire “the leaker” Comey. Still not a single person can cite where or why the POTS doesn’t have that authority.

Fifth, it’s “Trump’s illegal Russian financial deals”. But that means we’re talking about things from before becoming POTUS and assuming we know what these alleged deals are!

All the while Democrats call the man a Nazi, allege his behavior will “kill children, the old and the planet”, demand “impeachment” without a specific crime stared and attack the GOP as “racist, bigoted, homophobic, Islamaphobic and so on”. Boy. . . .do these folks not see where their language, accusations and evolving narratives are leading?

Can the adults in the DC please stand up?

This sounds like the begining of a new tactic to try and get Trump’s tax returns.

See how they set it up? Accuse someone of malfeasance. Insist on a “special prosecutor” to “investigate”. When the person hires an attorney, declare that hiring an attorney is a sign of guilt. This whole “investigative” apparatus is just to give the illusion of a scandal.

Pence hasn’t been accused of anything, which is why Ms B affects such surprise that he hired a lawyer just in case. Nobody raised an eyebrow at Trump hiring a lawyer because it’s obvious that he needs one.

Sounds like a good way to fight one of the Left’s favorite tactics.

They run around lobbing stink bombs and setting little fires, then shriek “FIRE!” so loudly nobody can talk over them. So these little fires have to be tended. That takes time. If the target Republican tries to tend them himself, he won’t have any time left to do the job he was elected to do. And if he does, they’ll lob more stink bombs until his time is totally monopolized.

By this methodology, even though none of the fires are anything serious, and most aren’t even real—and everybody knows it—they will still have succeeded in immobilizing the target. Mission Accomplished.

But it won’t work if the target knows how to delegate. By having someone else handle a little fire, the target wastes little of his own time or effort. And in an office like the Presidency, almost unlimited resources are available to bring on help as needed. Which means that, properly managed, anyone in the Executive can handle unlimited quantities of stink bomb attacks.

For some fires, a lawyer may be the most useful help. So hire one. And go back to real work. If it turns out to be too much work for one lawyer, hire two. Or three. There are plenty of lawyers around Washington. Defense against stink bomb attacks can be scaled up as well as the attacks themselves.

Exactly. For someone like Pence, putting a lawyer on call to handle matters just in case he should ever be accused of anything is simply common sense.

Not only is doing so common sense, not doing so is utter stupidity.

The Democrats overtly oppose and attack the Trump administration, while the establishment GOP does so more covertly. Throughout the campaign, Trump was asked and assured his supporters repeatedly that he knew it would be a two-front political battle were he to win the presidency and that he and his team were fully prepared to win that battle. The outsider would drain that swamp.

To be sure, the Democrats will launch one political missile after another throughout Trump’ presidency – that was going to happen no matter which GOP candidate won the presidency, and that’s just what they do. They will not stop till a Democrat is in the White House. It has little to do with Trump, per se, and had Cruz, Rubio, etc., won, they would be atacked and demonized as well.

What is different, and specific to Trump, is the constant covert undermining by his own party, the members of which ought to be his main ally against the Democrats.

The elitist establishments of both parties now work tirelessly to thwart Trump, get rid of him if they can. They are careerist insiders while Trump, of course, is Mr. Outsider, a cornerstone of his campaign platform.

The “outsider” has always held a lofty position in American politics, literature, movies, etc., the loner who sweeps in, beats the bad guys, and gives justice to the people.

It is all well and good to consider Trump an outsider, but you have to understand that the establishment Dems and establishment GOP are not bound to the romantic definition of ‘outsider’ Trump and his supporters use, because there are other definitions.

Establishment Washington DC sees Trump as another sort of outsider – a parasite come to waste the host body. Right now, Trump is like a virus in their bloodstream that must be destroyed. One man’s hero is another man’s parasite, and that is what’s happening in Washington DC.

He, and, apparently, many others, see dead Soviets under their beds and in Water Closet.