Want to become an MSM hero? Confront the Trump administration. 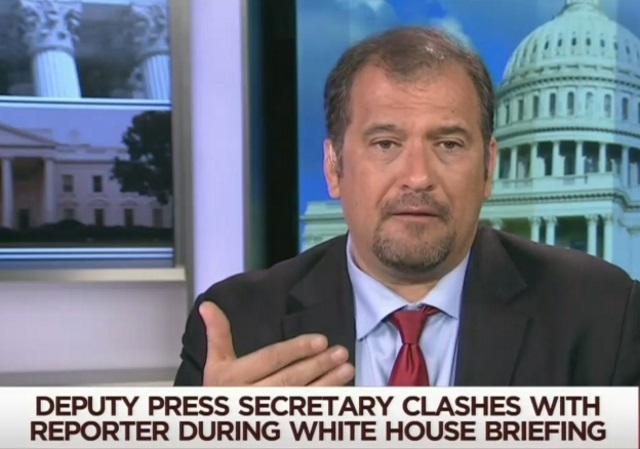 Appearing on Morning Joe today, Karem received a hero’s welcome. As he was introduced, someone exclaimed “well done!” and there was even a smattering of applause. At the end of the segment, after Karem pleaded for the media to “stand up” to the Trump admin, Mika Brzezinski concluded, “and stand with you. Brian Karem: amen—to everything you said.”

Note: when Karem said that he found the attitude of the Trump admin toward the press “disheartening,” Mika ominously said “it may be more than disheartening. That’s my gut.” It’s not entirely clear what Mika had in mind, but earlier in the show she referred to the Trump admin as a “dictatorship.”

MIKA BRZEZINSKI: During the White House briefing yesterday, deputy press secretary Sarah Huckabee Sanders criticized the media for its coverage of the Trump administration and what she called the Trump-Russia hoax. After mentioning a CNN article that was recently retracted, she got into a tense back-and-forth with one White House reporter.

WILLIE GEIST: And joining us now is the reporter you saw just there who took part in that exchange, executive editor for the Sentinel newspapers, Brian Karem. Brian, thanks so much for being with us this morning [smattering of applause heard off-camera]. Well done!

BRIAN KAREM: For the government to sit there and undermine essentially what is a very essential checks and balances in the system, it’s disheartening. It’s unnerving. It’s: I can’t take it anymore! It’s nuts!

KAREM: I agree it’s more than disheartening. What it speaks to is dissolving the independent media. He’s inflaming the very people who got him in office. He’s speaking to his base and he’s trying to undermine the very essence of what we do, and that’s not good for this republic. It’s not good for this country. It’s an anathema, it’s got to be stopped, and we have to stand up to it and more of us have to stand up to it every day. Someone joked with me last night, do you think they’ll pull my press pass? I hope not but I hope others will, you know, stand up and be counted as well.

MIKA: And stand with you. Brian Karem, thank you. Amen—to everything you said.

Good luck with that, Brian.

Is it just me, or is this the most surprising thing about this story: PLAYBOY has a White House reporter? They have a news department? For how long? or has it only been since Trump (and his obvious enjoyment of beautiful women) has been in office?

Wait…. I’ve always been told that guys read it for the “articles.”

We read it for studying female body language.

Soon a ‘reporter’ for Screw Magazine will surface to scream and yell.

Ironic, but Screaming Fauxahontas and Screaming Camilia Harris are being drowned-out.

The left has taught its useful idiots to scream in the face of defeat by reason. It’s backfiring.

Listening to this group talk to each other is like the lookouts on the Titanic talking about their future. Where is the other side in this program? Where is the counter to this absurd logic? Do they really think that Americans are this stupid?

Yes, they do think Americans are this stupid. Unfortunately a vocal minority of Americans prove them right daily, if not hourly.

So, they don’t like being Dan Rathered? Well, they can fix that … but they won’t.

So indulge me, please; I just like typing it—

I’m assuming that at no point did anyone ask him about his producer admitting that they’re pushing this known false narrative for ratings? Or the comment his producer made about journalistic ethics being a “quaint” concept?

Mark, I enjoy your reports on Mika and her boy because it helps me overcome the nagging feeling that I’m stupid since I bought a 1971 Ford Pinto new.

“He’s inflaming the very people who got him in office.” Really? He thinks the MSM got Trump into office? That’s ludicrous!!!

No, he thinks Trump is insulting those that got him into office because he believes he is one of the people.

Lunacy, thy name is Liberal.

I just hope Hugh Hewitt keep up his podcasts, as I occasionally liked to read his take on things, and I’d like to be able to hear them in the future.

But I certainly will not give that channel a ratings point by tuning in to their frequency, Kenneth.

No way I’d tune to msnbc – for anyone – until, MAYBE, it changes ownership – and staff – and then becomes part of the EIB Network.

One very satisfying outcome of this election for me is that there is now a robust group of people that watch the White House press briefings and either watch or read transcripts of hearings, speeches, executive orders and original statements.

The press briefings are a regular feature online, so that access is easy.

I saw the whole thing, earlier. Karem seemed to pretend that this discussion was about a single news story when in fact CNN has been involved in a string of poorly sourced, demonstrably false stories for which it has not apologized. For this reason, his outburst was greeted with jeers and some quick research that immediately turned up his sketchy credentials, and whether his rant was prepared in advance and staged.

Oh, and James O’Keefe has hinted that there will be something else today, right about now.

Karem’s attack was nothing more than an response to the undeniable fact that a significant part of the news media has been caught red-handed spreading phony news stories about the President. It is interesting that this diatribe occurred right after the release of the O’Keefe CNN video and the recent disclosure that many of the reports by the NY Times and WaPo were inaccurate, at best, and totally fabricated at worst.

But, instead of verbally attacking news organizations which have been caught dispensing “fake news”, he attacks the WH Press office, whose information has been proven to be accurate over and over again. This is nothing more than a miscreant claiming victimhood in order to deflect blame.

As if there was ever any doubt, Morning Joe has now clearly become nothing more than a daily 2 hour self-affirmation section where lefties can go and chant “WE HATE TRUMP!!! WE HATE TRUMP!!!” in unison.

No doubt. Boring, isn’t it?

Trump won the battle. This news is now as old as it is fake.

So much more to report on.

Psst! No one tell the Lefties that makes them totally
“un-productive!”

Personally I hope the WH press secretary continues to have off camera briefings and if/when they do on camera they take questions from everyone but CNN and idiots who have become PIAs. If all someone wants to do is ask “gotcha” questions or repeat ones the WH has said they won’t answer they should be ignored until their heads explode.

The old saying “A picture is worth a thousand words” is the reason the msm wants their old video game back. Without the optics, they actually have to write something down on paper and they are not used to that. If you have ever watched these “Briefings” you know they are a msm circus and not for needed information. They usually ask the same question many times trying to elicit an angry response from the butt of their inquisition. I saw screw ’em and their networks too!

notamemberofanyorganizedpolicital in reply to inspectorudy. | June 29, 2017 at 6:40 pm

Plus that allows the MSM to be the laziest of the lazies….

Get a real job digging ditches MSM. That’s all your fit for.