Russia has demanded the country not join. 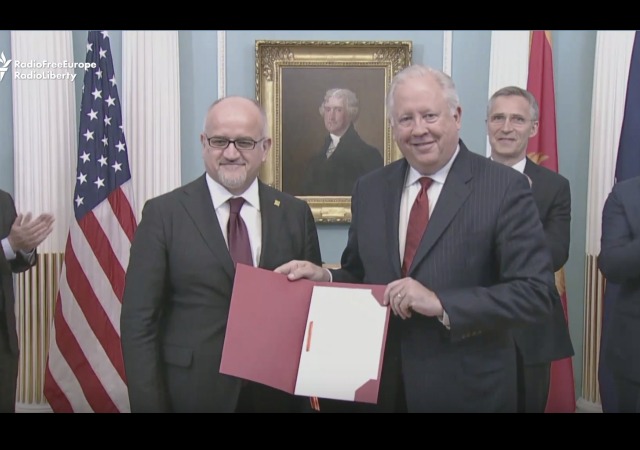 Montenegro has become the 29th member of NATO on Monday, defying Russia’s demands not to join. From RadioFreeEurope/RadioLiberty:

Montenegrin Foreign Minister Srdjan Darmanovic handed over the Balkan nation’s accession papers in a ceremony at the State Department’s ornate Treaty Room on June 5, making the country the 29th member of the North Atlantic alliance.

The State Department’s second-highest official, Undersecretary of State for Political Affairs Tom Shannon, said that Montenegro had asserted “its right to choose its allies openly, even in the face of concerted foreign pressure.”

Prime Minister Dusko Markovic, who also attended the event in Washington, alluded to his country’s past plight at the hands of larger powers.

“It is a historic event for a country and a nation which endured enormous sacrifices in the 19th and 20th centuries in order to defend their right to a free life, the right to decide our own future, recognized by the world under our own name, and with our own national symbols,” Markovic said.

“We are celebrating today the fact that it will never happen again that someone else decides instead of us and our state behind our back, as was the case in the past,” he added.

Russia has made no secret of its opposition to NATO membership. Moscow has said that Podgorica’s NATO course runs counter to hundreds of years of “fraternal relations” between the two mostly Slavic, Orthodox Christian nations.

Russia also wields considerable economic power, as it is the largest investor in the Balkan country and an estimated 7,000 Russian nationals permanently reside in the nation of about 620,000.

Russians own about 40 percent of the country’s desirable Adriatic Sea coast and Russian tourists account for as much as a third of overnight visits in Montenegro.

Still, analysts said it is unlikely Moscow will take any real action over Montenegro’s accession.

“The Kremlin isn’t ready to commit significant resources to keep Montenegro out of the U.S. orbit,” said Maksim Samorukov, an analyst at the Moscow Carnegie Center.

Great. Now the U.S. taxpayer has another country to support militarily.