Mika: either a dictatorship “happening right now, or someone who’s not well. There’s very few options.” 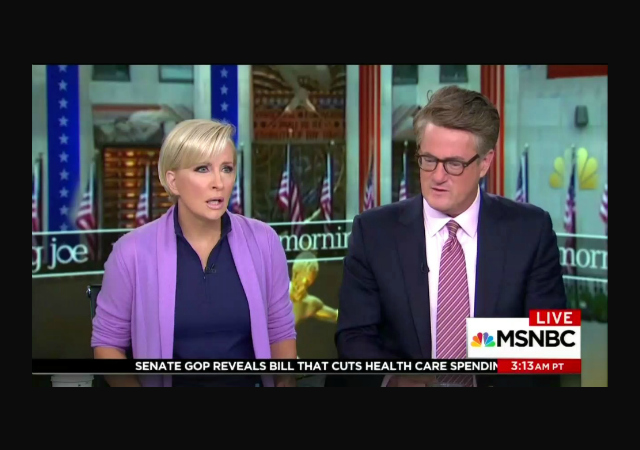 One of our categories here at Legal Insurrection is “Trump Derangement Syndrome.” Over at Morning Joe, Mika Brzezinski provides a prime example of the malady.

We noted yesterday how Mika was pushing poor Jon Meacham into drawing parallels between President Trump, the Nazis, and North Korea. Brzezinski ratcheted things up a notch this morning, suddenly blurting out that it “feels like a dictatorship developing.”

Joe Scarborough tried to talk his partner off the ledge, saying “that’s an inside voice saying what you just said. You want to be like Greta. Greta pulls back before she says things like that.”

But Mika wouldn’t be mollified, proclaiming that you can read books about “how dictatorships happen . . . and what you are seeing is either this happening right now, or someone who’s not well. There’s very few options.”

MIKA BRZEZINSKI: It’s sad for the country. This is unprecedented, to have a president who behaves this way. Can anyone go back in history?

MIKA: I tried. He stretched as best he could to Nixon, and then we had to go outside the United States of America to find a parallel, and I believe it was North Korea.

JOE: So, I can’t wait to here what Kasie Hunt has to say, once we read the news on health care.

MIKA: Well, it does feel like a developing dictatorship. Anyhow, Senate Republicans rolled out their health care bill yesterday, and it took little time before they were met with internal resistance.

JOE: See, that’s the sort of thing, that’s an inside voice saying what you just said.

JOE: You want to be like Greta, who’s like—Greta pulls back before she says things like that.

MIKA: No, no. I’m going to say, I’m going to actually channel Greta, and have an even tone, but I will say, you can do some work reading history, and reading books about how dictatorships happen, the development of very negative forces taking over, and what you are seeing is either this happening right now, or someone who is not well. There’s very few options.

It feels like a child, trying to emulate a journalist, but missing the subtle-yet-critical parts.

Poor Mika! She has read some books. Trouble is, they were written by Karl, Vladimir, Josef, Fidel, Adolph, Paul and Saul. Maybe Joe can put his coat around her as the stylish sweater isn’t stopping the chill.

Anyone that watches MSNBC is a masochist anyway so abusing them makes them happy.

This poor elderly lady has already admitted that she is not well. Why can’t Obamacare make her head right again? Why? Wasn’t leaving her family for that smuck Joe a silent cry for help? We need to start a fundme account to pay for the inpatient help she so desperately needs. Don’t forget, this could be your granny. The Clinton foundation has graciously volunteered to serve as a collection point for any money donated.

I genuinely have no idea what she’s talking about.

Could someone help me understand what “behavior” she sees from President Trump that makes her think dictatorship is imminent?

The worst thing I’ve heard about him is that some of his rhetoric (and his travel ban EO) are anti-Muslim.

But compare to Wilson or FDR — it’s not even close.

But that’s at least an actual argument I’ve heard from the left.

I’ve never heard an argument to support the idea that Trump is acting like a dictator — only these vague assertions.

notamemberofanyorganizedpolicital in reply to clintack. | June 23, 2017 at 3:27 pm

Maybe Mika was saying she feels she is sprouting a….Dictatorship herself.

Back in 2012 I think it was, I accidentally clicked on links to New York Times newspaper articles about a dozen times that year. I try to avoid anything linked to the New York Times like the plague. (The link either didn’t have an easily IDed NYT in its web address, or I just clicked too fast.)

In every one of those dozen New York Times articles the author was calling for Obama to start a dictatorship and/or screeching for a Federal government bail-out of the newspaper industry!

Mika is just self-projecting how she and the Democrat Party are dictators and they love dictatorships.

Valarie ,
Yes and you are correct, further I feel as if these countries are too cheap to pony up an 18 million dollar bribe for the Clinton Foundation to get off the terror watch list ie. Algeria, then they deserve it.s
Terror is bad ,but dissing the Queen will get you every time.

It sounds like a conversation these two should have had at home. Pillow talk maybe.

Ugh – mental picture will take a while to dissipate.

“The idiot is not our greatest problem. He is indeed loathsome. … Nevertheless, he lives his life and is done. He does not continue the race with a line of children like himself. … It is the moron type that makes for us our great problem.”

Mika’s right, it’s just that she does not know where the attempt at establishing a dictatorship originates. Apparently she is just as politically astute as her father.

In other news, we have another salvo from our unelected people who think Americans are unfit to govern themselves.

The Democratic Party at the national level seems to have a notion that, if only they calibrate their propaganda precisely enough, they will be able to control voters. Unfortunately for them, American voters now have unprecedented access to the means of publication, which severely undercuts the value of propaganda as a decision-corrupting tool.

notamemberofanyorganizedpolicital in reply to Valerie. | June 23, 2017 at 3:29 pm

There’s good reason why its known as Fascist Book!

The Democrats are gonna find out that trying to control the U.S. (free) electorate is like trying to herd cats!

Her old pappy was the original Polish joke.

I think Joe’s in big trouble here….never, ever, compare your wife, girlfriend, whatever to another woman. In this case, Greta was held out as some standard they obviously discussed between themselves. Oh, to be a fly on that wall!

Mika, show me on this doll where the evil dictator in the White House hurt you!

The tactic of the big lie. repeat it often enough and they think people will believe it.

notamemberofanyorganizedpolicital in reply to Bucky Barkingham. | June 23, 2017 at 3:31 pm

Speaking of someone who’s not well!

How did all these know it alls ever get their platforms to spout from?

Ah yes, books. It’s amazing what one can find, if one actually reads them, rather than just rhapsoding about the possibility of reading them … Here’s an anecdote from a book: In Germany, a little while ago (well, 70-odd years), someone told a mild joke with Hitler and Göering as the characters. It was overheard, and the teller was—after the customary due process—executed.

Lil’ Mika can only dream about getting so much attention.

As a dictator, one would take control of all of the government agencies and use them for power and total control of the people. Who has just been caught doing just that? Why it’s Mika’s good friend jug ears. oabam was as close as we have come to a dictatorship in my lifetime and she is worrying about Trump? He can’t even get his appointees vetted to run the agencies! We still have Koskinen at the IRS! I think that Joe and Mika are about to run out of viewers and then they will have to go on “Dancing with the stars”.

they will have to go on “Dancing with the stars”.

Don’t be such a pessimist. Hollywood Squares is still on. Shoot, it may even have a square reserved for the two of them.

Maybe they’ll revive the “Gong Show” for them.

notamemberofanyorganizedpolicital in reply to inspectorudy. | June 23, 2017 at 3:32 pm

Obama was just caught doing that!

Mika: *sigh* Joe, know, I’ve been doing some thinking lately and…
Joe: Well, I must admit, that is rather uncharted territory and totally new behavior for you.
Mika: Yeah, kinda makes my head hurt when I do it.
Joe: I understand, poor thing. It’s unfair and unfamiliar for you to force both of your synapses to try to work together at the same time.
Mika: Yup. I’ve completely closed my mind now.

Joe: That’s a good start towards understanding and interacting with the rest of the world. A Lib can’t be too careful venturing out into the wild.

It’s a delusional comment. So context would not really matter. But I am sorta curious what prompted her to make such an idiotic statement.

I assume it has something to do with cutting back on the daily televised press briefings. Is that it?

Those provide a predictable source of content for the cable yappers to fill time. I can see why she’s angry about that. They might have to actually create some proprietary content.

Clearly, Mika would never eat a hot dog because if she thought about how it is made, she wouldn’t be able to eat it.

Government in DC under Trump has been up front in your face hot dog making. The facade of gentile statesmen and women has been left in the gutter.

I bet eating hot dogs is against Mika’s religion – so to speak.

If a dictatorship were developing, the army would be taken over and the dictator would take the rank of colonel. Why colonel, I don’t know, but that seems to be the preferred rank of dictators.

Congress would be disbanded, the courts stuffed with loyalist and the press nationalized.

Whenever I see these two on TV, I am reminded of the Harabo commercial where the adults are in the meeting talking about their candy using the voices of small children and using a child’s method of speaking. Mika and Joe seem so much like small children trapped in an adult’s body trying to sound relevant by speaking of things that to them seem profound but to the public are infantile. I would assume whenever either of them gets out of line and does something really egregious, MSNBC outs them in a timeout.

Mika has to be the dumbest TV personality and definitely the worst dressed. Would a dictator allow her and liberal Joe spout their nonsense? I can’t stand liberal Joe either. I get the feeling that she is going to make him very miserable. I feel bad for their kids. Did Joe replace his family for Mika’s?

A mind is a terrible thing to waste, Mika.