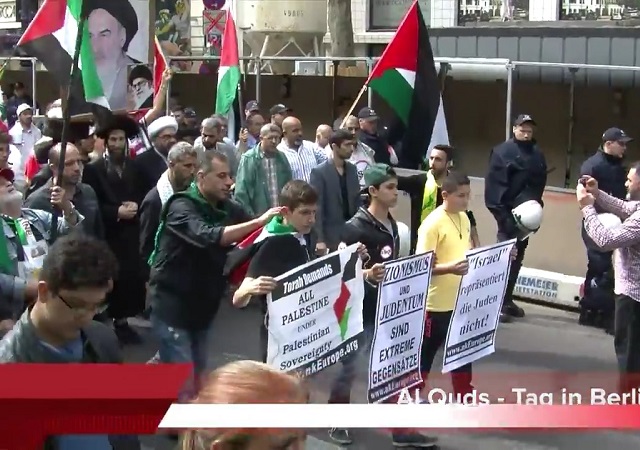 Germany’s Jewish community has criticised the government and lawmakers for failing to act against the rising antisemitism in the country. The Head of the Central Council of Jews in Germany, Josef Schuster, slammed the German politicians over ‘lack of interest’ when it comes to combatting the rising antisemitism within the country. The Central Council of Jews in Germany is the umbrella organization of Jewish communities in the country.

The statements coincides with the recent parliamentary debate centred on a detailed report on antisemitism by a group of independent experts tabled in the German Bundestag. The 311-page report by the ‘Independent Expert Group on Anti-Semitism’ deals with — to quote a German news network — the “current anti-Jewish sentiment in Germany.”

The German public broadcaster Deutsche Welle reported the recent parliamentary debate saying, “One by one, politicians from all of Germany’s major parties took to the podium to condemn anti-Semitism and stress how seriously they took the problem”. Deutsche Welle revealingly called the parliamentary debate on Antisemitism a “ritualized speech-making.” The Bundestag debate ended with Merkel’s government deciding to put the report on the back burner. 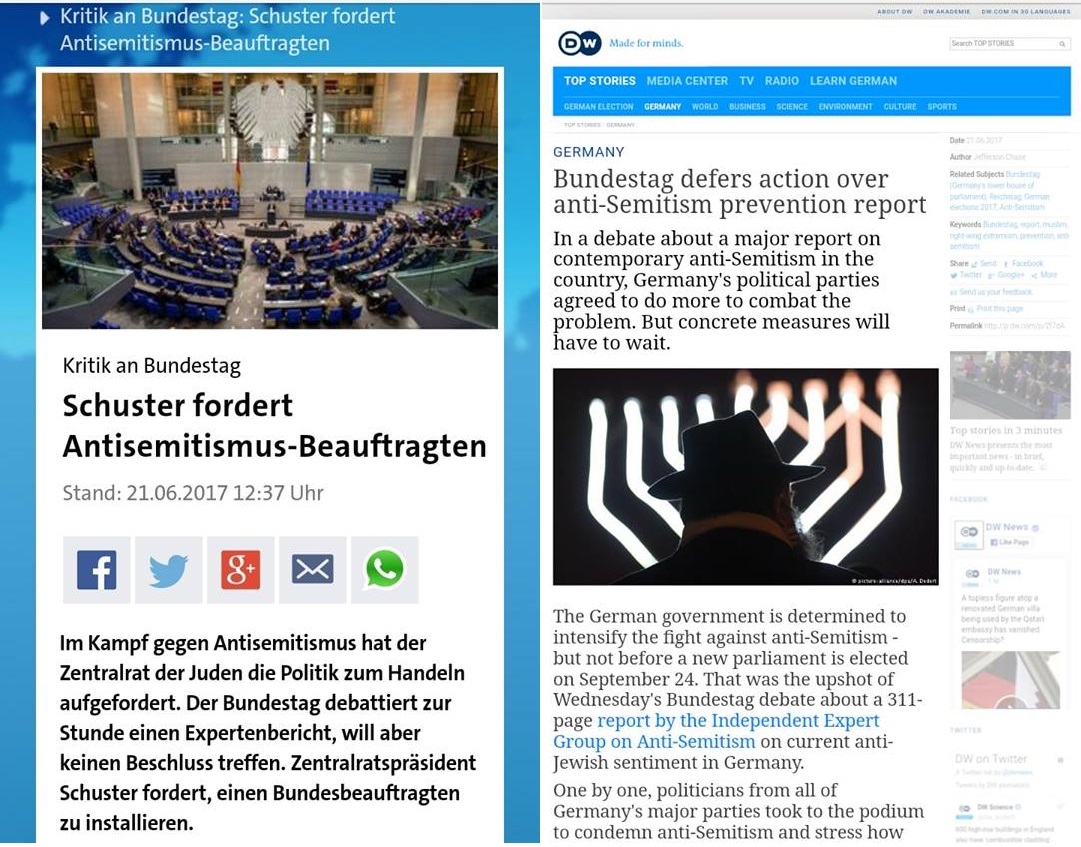 “The Central Council of Jews in Germany accused the German Parliament of lack of interest in dealing with the topic of Antisemitism,” German public broadcaster ARD wrote:

The Central Council of Jews in Germany has urged the political [establishment] to act in order to combat Antisemitism. The German Parliament is currently debating a report compiled by an expert group. The President of the Central Council, Schuster, is calling for the appointment of an ombudsman.

The Central Council of Jews in Germany has criticised the German Parliament for lack of interest in dealing with the topic of Antisemitism. President (of the organisation), Josef Schuster, urged the issue to be made part of the German political [debate]. “I believe there is an urgent need to appoint an anti-Semitism ombudsperson in the Chancellor office, who is not bound by the legislative term.” Schuster told the [broadcasters] ARD and ZDF’s morning show ‘Morgenmagazin.’

The German Parliament is presently debating a report compiled by an expert group. Schuster said that he was disappointed that the parliament won’t be taking any action about to the 300-page reports. He was worried that the report could disappear ‘in the drawer.’ [Author’s translation]

Unlike Germany’s Jewish community, Merkel’s government doesn’t see any urgency in addressing the issue of growing antisemitism in the country — let alone tackle it — and has decided to defer any action until after the September General Election, in which Chancellor Merkel hopes to get re-elected for the fourth time:

The broadcaster Deutsche Welle summarised the recommendations of the report tabled before the Merkel government, saying:

The report, which was published in April and was the result of more than two years of research by nine experts, details both forms of anti-Semitism and advances five core suggestions for how to deal with the problem. They include creating a government anti-Semitism ombudsperson and a database of anti-Semitic crimes and incidents as well as guaranteeing long-term funding to organizations fighting against anti-Semitism in Germany.

The report also describes how demonization of Israel is increasingly becoming the preferred weapon of choice for antisemites in the country:

Six hundred and forty-four anti-Semitic crimes were reported in Germany last year, although the actual number was probably dramatically higher. After reviewing a substantial number of studies on the topic, the Expert Group said that while traditional forms of anti-Semitism had declined somewhat, modern anti-Semitism, for example, criticism of Israel being extended to Jews in general, remained alarmingly popular. [DW News; April 24, 2017]

Germany is home to less than 100,000 Jews that make up 0.2 percent of the national population. According to country’s leading statistical website Statista, the Jewish population has been in gradual decline for the past 10 years.

Ironically, the decline in the Jewish population has been met with a spike in antisemitism. A recently published study found 50 percent of Muslim refugees to Germany held antisemitic views. The same study also found 20 percent of Germans affirming antisemitic statements. “More than half of Muslim asylum seekers showed clear tendencies of an antisemitic attitude pattern,” The authors of the study was quoted saying by the newspaper The Jerusalem Post.

Merkel’s government, preoccupied with the efforts to get re-elected in upcoming national election, has decided to ignore the ominous resurfacing of antisemitism in the country for the time being.

However, antisemitism, once again rearing its head in the European heartland, is a sign of a deeper civilisational malaise. German politicians aren’t doing their country or Europe any favours by putting the it on the bureaucratic back burner.

Germany has outsourced the Solution.

They’re just getting the immigrants to do the jobs that they don’t feel like doing themselves anymore.

Among the inevitable and predictable consequences of immigration — in any country — are that certain self-serving politicians will be all too eager to pander to, and, curry favor with, these new arrivals, even if that encompasses turning a blind eye to anti-Semitism and other deleterious effects of said immigration.

Certain German politicians have made a craven, but, ultimately, self-serving decision, that, given current demographic shifts taking place in Germany, their political ambitions and interests will be better served by “submitting” to the anti-secular, supremacist desires of these new arrivals, while ignoring the legitimate concerns of German Jews.

German lawmakers are active on the rising tide of Jew hating. They are supporting the Jew haters and importing even more of them. Jews in Germany better get the H out of there, and soon. Come to Texas.

Merkel and her party are fools if they think they will stay in power long-term. Muslims only care about their own and will start electing Muslims exclusively whenever possible like they’re now doing in the UK. Of course, in the long run the Muslims will put them to the sword just like they will to any remaining Jews.