She will not allow the UN to continue bullying Israel. 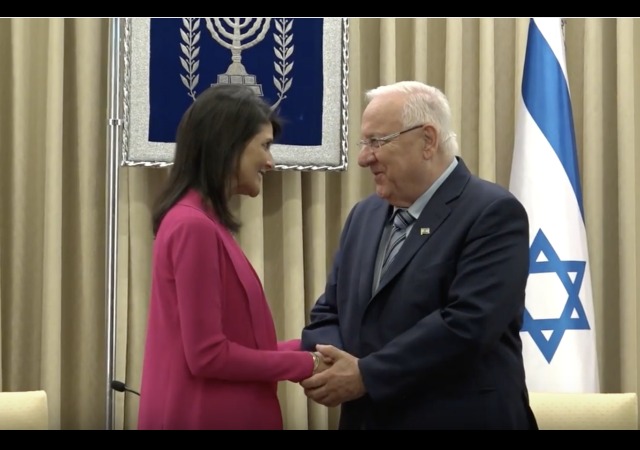 The day after US UN Ambassador Nikki Haley stuck up for Israel in front of the UN, she traveled to our main Middle East ally on Wednesday. President Reuven Rivlin felt overjoyed to meet her. From The Jerusalem Post:

Rivlin, who usually welcomes guests in a reserved way, went for a more intimate gesture with the US envoy. As soon as he emerged from his office into the small and intimate reception hall, he instantly clasped Haley’s hands in his. With his face radiant and in a voice so soft that it was barely above a whisper, he told her how delighted he was to see her. “It’s a real pleasure,” he repeated over and over.

Haley was accompanied by her Israeli counterpart Danny Danon, who was warmly embraced by Rivlin – both of them having been Likud members of the Knesset in the past. Also accompanying Haley was US Ambassador to Israel David Friedman, plus a five-member delegation.

It was somewhat difficult to reconcile the diminutive figure with an almost shy demeanor, with the hard-hitting and very determined US ambassador to the UN. The only give-away to how passionate she can be was her choice of wardrobe: a hot pink, slim-fitting dress with a matching loose jacket.

Rivlin always makes a point of welcoming visiting dignitaries to “Jerusalem the capital of Israel” – and even with someone to whom he did not have to emphasize this fact, he could not resist.

“You are a dear friend of Israel,” Rivlin told Haley in his official welcome. “We appreciate your strong stand on the world’s most important stage in support of the security of the people and the State of Israel. With your support, we see the beginning of a new era. Israel is no longer alone at the UN. Israel is no longer the UN’s punching bag.”

Haley appreciated the warm support, but seemed shocked to receive such love! From The Times of Israel:

“You know, that’s all I’ve done — tell the truth — and the reaction is kind of overwhelming,” she said. “It was a habit. It was something that we’re so used to doing. And if there’s anything I have no patience for it is bullies, and the UN was being such a bully to Israel, because they could.”