S&P downgraded the state’s rating to just above JUNK. 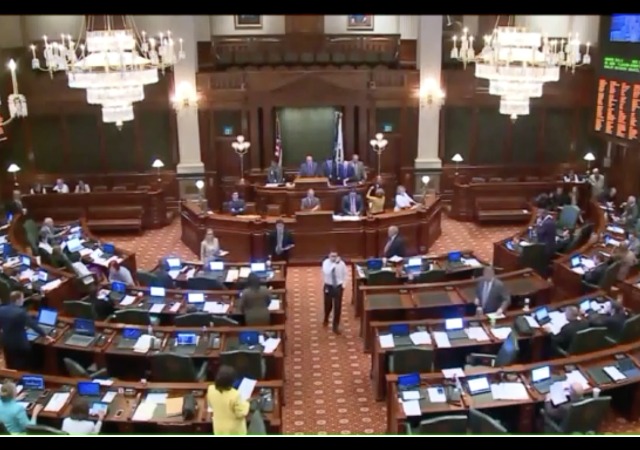 What a shock. The Illinois legislature has once again missed its spring deadline to pass a budget even though the state owes $14 billion to unpaid bills. From ABC 7:

Knowing the Governor Rauner would veto a budget that included tax increases, House Democrats left town without voting on a Senate-passed budget. The governor said all along he would only sign a budget with tax increases if it included reforms like workman’s comp or a property tax freeze, two things Democrats have passed but the governor said the bills don’t go far enough.

“The majority of the House has shown no interest in any real changes to the system but I hope we can work something out with senators and then all of us together, Democrats and Republicans, put pressure on the House majority so they aren’t just loyal to their political positions, they actually want to do things that are good for the people of Illinois,” Governor Rauner said. “I believe we can get there, we just got to stay persistent.”

House Democrats did not vote on a plan passed by the Senate. Now it will take a three-fifths majority to pass a budget instead of a simple majority.

That means Democrats will need some Republican support.

Illinois closes out the current fiscal year nearly $6 billion in the red, a deficit that continues to grow. Spending mandated by court orders and state statute continues at levels set by the last budget lawmakers approved in 2014, when revenues were higher. A 2011 temporary income tax increase has since rolled back.

Adding to the mess is a ballooning backlog of unpaid bills to state contractors and vendors that’s reached about $14.5 billion and roughly $130 billion in unfunded pension liabilities.

Illinois, which already has the worst credit rating of any U.S. state, was downgraded another step Thursday by S&P Global Ratings to one notch above “junk” status. The rating agency noted a “severe deterioration” of Illinois’ fiscal condition and “unrelenting political brinkmanship.” The lower rating means taxpayers pay more when Illinois borrows.

Rauner kept saying “dereliction of duty” to ABC 7 and also blamed the Democrats. In a way, his blame is correct. ABC 7 continued:

So what exactly happened Wednesday night? Not wanting to take the political risk of sending a budget to Republican Governor Bruce Rauner that he would then veto, Illinois House Democrats chose not to vote at all on a Senate budget plan that included tax hikes, missing the midnight deadline.

Illinois Comptroller Susana Mendoza retorted back that the state has not passed a budget since he came into office three years ago. However, Mendoza must remember that the people of Illinois elected Rauner after he promised to lower taxes in the state.

Ironically, some of the state senators boasted that they wanted to raise taxes. From The Chicago Tribune:

While it might seem odd that a politician would claim credit for backing tax hikes, which tend to be unpopular with voters, some Senate Democrats embraced their status as the only ones who voted to raise taxes.

“I know it’s easy to lump us all into the same group of ‘ineffectual, we haven’t gotten our jobs done’ (lawmakers). Well, we in the Senate have done our jobs,” said Sen. Heather Steans, D-Chicago. “We stood up, we passed a balanced budget. We now need everyone to step up and do their jobs and do this for the state of Illinois.”

Without the budget, S&P downgraded Illinois’ already horrific credit rating. Now it has the worst rating of all 50 states.

#Illinois already had worst credit rating of any US state. S&P today downgraded it to one notch above "junk." https://t.co/I28jeVsAA8

That $14 billion in debt forced S&P to lower the rating “to triple-B-minus from triple-B.” Since “S&P has the bonds on negative credit watch, which means it could lower its rating again soon — potentially as soon as July 1 when the state’s new fiscal year starts.” Barron’s reported the harsh words S&P’s U.S. States analyst Gabriel Petek had for Illinois:

The rating actions largely reflect the severe deterioration of Illinois’ fiscal condition, a byproduct of its stalemated budget negotiations, now approaching the start of a third fiscal year. We placed the ratings on CreditWatch with negative implications because, in our view, the unrelenting political brinkmanship now poses a threat to the timely payment of the state’s core priority payments.

We also believe that Illinois is now at risk of entering a negative credit spiral, where downgraded credit ratings would trigger contingent demands on state liquidity, further exacerbating its fiscal distress.

I wonder why it is just above junk, and not just junk.

What’s the rating below junk? – “obama”?

Everything the left touches, it ruins.

Maybe California or Puerto Rico can lend them a hand.

I am assuming that vendors are only selling to the State of Illinois [and maybe to smaller government subdivisions since they are frequently dependent on state funding] on a cash in advance basis. If not, they are bloody fools.

So many votes to buy, so few revenues.
Of course, Illinois, California, and Washington are still going to honor Obama’s Paris climate accord.

They obviously need a strong conservative leader like Paul Ryan to really get things done.

Chicago has been run by demoCraps for the past 70+ years and it’s the same Shit Hole. The voters keep electing them in expecting a different result,,,, that’s the definition of INSANITY !!

“I am assuming that vendors are only selling to the State of Illinois … on a cash in advance basis.”

Probably not, since the state has no cash. Just as with bonds, markets solve problems like this by charging a risk premium. Thus the state will be able to buy stuff for delivery tomorrow with promises to pay “someday” so long as it’s willing to pay enough to compensate vendors for the risks they are taking.

Here is a whimsical thought. In the 1980s Michael Milken of the now defunct Drexel Burnham investment would buy up the junk bonds of a failing company in a leveraged buyout. The idea was that the junk bonds trading for pennies on the dollar had a cumulative value less than the break up value of the company. Imagine if Trump, Sheldon Adelson and Peter Thiel combined could do a leveraged buyout of Illinois.

There are many reasons one cannot perform a leveraged buyout of a sovereign state. Moreover the constitution prohibits the carving up of a state.

Like I said, this is just a fleeting thought of whimsy. But just pondering the possibility gives me happy thoughts.