The New York Times covered it “like it was Pearl Harbor.” 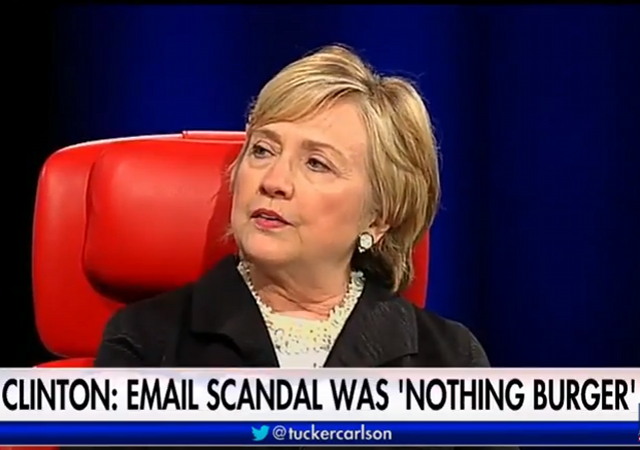 Speaking at a tech conference in California this week, Hillary Clinton launched into another diatribe about the forces which conspired against her in the 2016 election. In the process, she referred to her very real email scandal as a “nothing burger.”

The former secretary of state sat down for questions in Rancho Palos Verdes, California, on Wednesday as part of the 2017 Code Conference. Her Election Day defeat to Republican Donald Trump was the subject of conversation, at which point she was asked about her worst campaign “misjudgment.” Her answer: the private server she used as former President Barack Obama’s top diplomat, which prompted an extensive investigation by the FBI.

“My email account was turned into the biggest scandal since Lord knows when,” Mrs. Clinton said, Mediaite reported. “And, you know, in the book I’m just using everything that anybody else said about it besides me to basically say this was the biggest nothing-burger ever. It was a mistake. I’ve said it was a mistake, and obviously if I could turn the clock back I wouldn’t have done it in the first place. But the way that it was used was very damaging.”

In her expanded remarks which you can see below, she implies media bias from the New York Times, blames fake news and repeatedly invokes interference by Russia.

Tucker Carlson did a great job last night unpacking all the conspiracies embraced by Hillary. From the FOX News Insider:

Carlson said that she donned “the trendy tin foil hat” he said Democrats have popularized since Trump’s election.

He pointed out that Clinton made the New York Times out to be a right-wing news source, and dismissed her email scandal as a “nothingburger.”

Carlson said Clinton’s conspiracy theory was so vast, she blamed alleged fake news websites based in Macedonia for working to undermine her candidacy.

“[So], with no message or economic agenda… she was going to win anyway,” Carlson said.

He added that Clinton’s ‘conspiracy theory’ must have tacitly included a way to “bamboozle” Pennsylvanians into electing a Republican president for the first time since 1988.

Because Hillary and her media allies are beating these drums on a daily basis, the willingness to embrace conspiracy theories is trickling down to members of the Democratic Party.

A majority of Democratic voters think Russia literally rigged the vote in the 2016 presidential election — an outlandish conspiracy theory with no evidence to support it.

The latest Economist/YouGov poll found 58 percent of Democrats saying that it is “probably true” or “definitely true” that “Russia tampered with vote tallies in order to get Donald Trump elected President.”

That number is up six points from December when 52 percent of Democrats said they thought Russia tampered with vote tallies.

Why should anyone be surprised?

This is the same party which believes to this day that Bush “stole” the 2000 election.

There was a time, long ago, before identity politics and the culture of victimization that we called people like her sore losers.

notamemberofanyorganizedpolicital in reply to sequester. | June 1, 2017 at 2:07 pm

They were also called “prostitutes.” You know those who do anything and everything for money…..

During the campaign, Trump said that he’d appoint a special prosecutor to investigate Hillary and Bill. But after the election, he saw the light (/sarc) and said that Hillary and Bill are “good people”. So, Trump seems to think that the email treason was a “nothing burger”, too. That reversal is one of the big reasons why I so despise Trump, and have zero sympathy for his current difficulties. He flushed the Rule of Law down the toilet.

Exactly. When are D’Rats ever going to be held accountable? If you are going to drain the swamp, you better be willing to hunt down a few alligators.

C’mon, Mike, you didn’t even mention the part where Hilliary admitted she was the worst presidential candidate ever.

Back when I was younger and more naïve, I thought that the MSM should judge itself on the basis of how well informed the public is on current events. 58% of Democrats believe Russian actually changed the vote totals in our election. The MSM does not want a well-informed public. Quite the contrary. The MSM wants an ill-informed public, as long as the are ill-informed in the right (that is to say, left) direction.

Just like the smug MSM of JFK’s day knew how bad a candidate he was.

They knew all about his massive scale, chronic womanizing, and the MSM was smugly laughing at the U.S. public for being conned by the Dems and them (MSM).

Members of the MSM of that time, have come forward in the past few years confessing how they deliberately sabotaged Nixon’s appearance and looks in that TV debate.

I think this was one of the few times that President Trump assessed the political cost of the investigation and wisely decided to offer an olive branch instead in an act of good will. That good will didn’t exactly get him very far with the media or the frothing Dems but it was worth a shot. He’d have the “vindictive” label in addition to everything else otherwise.

President Trump can always change his mind later, but he has bigger fish to fry for now. Hillary deserves an investigation, but she looks to be publicly going off the rails now in Oberman-esque fashion. That should help Trump with no downside. She’ll be seen as both crooked AND crazy.

I believe most people who have had their own business, worked in family businesses, or who have worked the management side of businesses for a good while all recognize what President Trump is doing.

You don’t take over an organization and change 100% of everything on Day 1, unless you want total chaos.

How do you eat an elephant (or donkey)? One mouthful at a time.

Hillary needs to go before a Grand Jury. She violated the law and must be punished.

Hillary is in an intense echo chamber bubble that is only penetrated when she is running for President and has an opponent making easy factual arguments about her. The easy arguments of nobody trying to erase their email server so it can’t be searched for deleted emails isn’t make by her fawning supporters and she things that bubble is the world we all live in too.

And MSM was telling us that Trump was dangerous.

I watched this performance and it brought to mind the old Humphery Bogart movie “The Cain Mutiny”. In it, we see the mental crumbling of a skipper of a US Navy ship falling apart over a bucket of strawberries that went missing from the galley fridge. He was already paranoid but then he snapped and came up with a conspiracy that was so complex all because of the strawberries. hillary’s performance was just as bad. Macedonia fake news agency? NYT out to get her? Facebook unfair? She saved the DNC? The Russians were smart enough to hack everyone but not smart enough to know how to use the material? Trump’s people “Weaponized” the hacked Podesta e-mails? When was the last time you saw a weaponized e-mail. I really felt sorry for her daughter. Oh wait, no I didn’t! Assisted living is waiting hillary.

notamemberofanyorganizedpolicital in reply to inspectorudy. | June 1, 2017 at 6:54 pm

Next Hillary will try to convince everyone that Kimberly-Clark weaponized her Depends against her.

(Because she claimed to have lady parts????)

Walker Evans in reply to notamemberofanyorganizedpolicital. | June 2, 2017 at 1:15 am

Using the “lady” about Hillary, regarding parts or anything else, is an ultimate oxymoron!