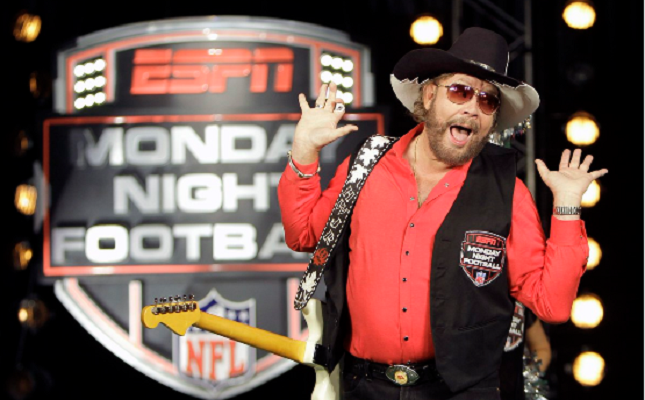 ESPN has been experiencing a precipitous ratings drop in recent years, due in part to the growing “cord-cutting” trend (cancellation of paid cable and satellite subscriptions) but also due to its increasingly shrill leftist politics.

In an apparent effort to turn the tide, the cable sports network has announced that Hank Williams, Jr. will be returning to Monday Night Football this fall.

Are you ready for some football?

After six years, Hank and all his rowdy friends are back on Monday night.https://t.co/4ssbjDnfeo

In a 2011 Fox and Friends appearance, Williams joked about then-President Obama (D) and then-House Speaker John Boehner (R-OH) golfing together, saying that it was “like Hitler playing golf with Netanyahu.”  The  left went insane, outraged that anyone would compare a sitting president to Hitler, and ESPN promptly pulled his song, “Are You Ready for Some Football?”, from its Monday-night football broadcast.

At the time, ESPN made clear that they were pulling the song because Williams had insulted Obama (one time too many).

“While Hank Williams, Jr. is not an ESPN employee, we recognize that he is closely linked to our company through the open to Monday Night Football. We are extremely disappointed with his comments, and as a result we have decided to pull the open from tonight’s telecast.”

. . . . Williams has been critical of Obama in the past. He campaigned for Sen. John McCain and running mate Sarah Palin in 2008, even changing the words of one of his songs, “Family Tradition,” to blast Obama and the Democrats for the financial crisis the country was facing prior to that year’s election.

Ultimately, the song was pulled from all Monday Night Football broadcasts, and Williams released a song about the incident entitled, “Keep the Change.”

Full disclosure: I quit watching ESPN as a result of this, and after watching the video at least 10 times (okay, maybe more), I shared it far and wide.

Williams, for his part, is thrilled to be back on Monday Night Football.

Are You Ready For Some Football is BACK. Yes, tune in Monday Nights to @ESPN for some Bocephus. https://t.co/fK6XSLJgDP

Williams’ new version of “All My Rowdy Friends Are Here on Monday Night,” with his trademark opening: “Are you ready for some football?” will debut before a Sept. 11 game between the New Orleans Saints and the Minnesota Vikings.

. . . .  For Williams, returning to ESPN is an unexpected homecoming.

“I never said, ‘Are you ready for some football’ on stage one time the last five or six years, but I will now,” said the singer, seated in his dressing room during a break in filming the commercial. “I’m feeling at home and it’s a real good thing … It’s kind of like the Nashville Predators playing for the Stanley Cup, it’s like ‘Wow.’”

ESPN calls the move a “return to our past.”

“I think it’s a return to our past in that it’s such an iconic song associated with football,” said Stephanie Druley, ESPN’s senior vice president of events and studio production.

“It was the original,” Druley told The USA TODAY NETWORK-Tennessee. “It belongs to Monday Night Football. It really is about returning to what fans know. It’s a Monday night party and that’s what we’re all hoping to get back to.”

The past to which they presumably wish to return is the past in which the sports channel focused on . . .  sports.

Last year, ESPN admitted that its ratings slump was due in no small part to its leftist politics.

ESPN Public Editor Jim Brady on Election Eve surveyed complaints that the sports network had gone overboard with liberal pieties, frustrating long-time watchers by injecting politics onto the playing field. He agreed with conservative complaints that ESPN had shifted leftward. . . .

….ESPN is far from immune from the political fever that has afflicted so much of the country over the past year. Internally, there’s a feeling among many staffers — both liberal and conservative — that the company’s perceived move leftward has had a stifling effect on discourse inside the company and has affected its public-facing product. Consumers have sensed that same leftward movement, alienating some.” [emphasis not mine]

. . . .  But with social media branding and the rise of debate shows that stir up strong opinionizing, ESPN has gotten more political. He summarized the problem neatly.

There have also been concrete actions that have created a perception that ESPN has chosen a political side, such as awarding Caitlyn Jenner the Arthur Ashe Courage Award at the 2015 ESPYS despite her not having competed athletically for decades, the company’s decision to move a golf tournament away from a club owned by presidential candidate Donald Trump and a perceived inequity in how punishments for controversial statements were meted out. [emphasis not mine]

It’s also noteworthy that in today’s “resist we much” anti-Trump climate, comparing a sitting president to Adolf Hitler is no longer out-of-bounds:  everyone from sitting members of Congress to mainstream media figures does so regularly.

Almost makes me want to break out in song… like Johnny Russell’s “Red necks, White socks and Blue Ribbon beer”!

Forgot to say “happily” break out in song…

Love Hank Williams Jr. Listening to his “Country Boy Will Survive” practically kept me alive during the horrible Obama years.

So I’ll be watching Hank and I bet they let him say what he wants because letting him go this time would be the end.

Next season, I’ll bet there won’t be any praise for Kapernick, either.

Maybe we can enjoy the football again.

I HOPE so! I LOVE Hank Williams, Jr. and the Monday night football song. Real women like real men, like J.J.Watt!

Partisan viewer measurement (meaning what is the party affiliation of viewers) for ESPN hasnshift d 28 points (!) in two years, one of the greatest destructions of brand equity I have ever seen.

A little window dressing isn’t going to fix the condescending tone and commentary of the network that fired Curt Schilling but pumps up gun control at every opportunity.

I cut th cord. They don’t get my money anymore. They are not going to for a long time if ever.

Bob Iger wants to run for President and use ESPN and the rest of Disney as a way to burnish his SJW credentials, great.

But the return of one Hank Williams song isn’t getting me to open my wallet.

The only way this nonsense will stop is if it too darned expensive to continue. Hit them in the wallet.

My family has been Comcast free for months now and everyone is fine and happy. The liberal Roberts get less money, Iger gets less money, CNnn get less – and conservative-friendly outfits get more money from me.

It took me a while but this year I finally had enough. I don’t play or pay their way anymore.

I’ve heard that about Bob Iger. The idea of him ever running for Pres is more moronically idiotic than even Bloomberg’s fantasy.

Donald Trump, love him or hate him, spent 30 years building a public persona which made him a household name. Bob Iger? People are gonna say, Wasn’t that the guy that Marty Feldman played in the Young Frankenstein movie???

Iger, bless is heart, is unelectable. Iger would be brought to his knees by his “Gloabalist” policies and historical H1B visa problems at Mothership Disney.

Iger may prevent Disney/ABC/ESPN employees from saying anything negative but there is too much there for competitors (particularly right wing competitors) to ignore and they will be all over it.

ESPN charges cable providers $88 a year for each subscriber. $22 a year just for MNF.

Hank jr is going to find out he’s not cut out to run with that kind of folk. Oh no….but, in all seriousness, get your money upfront, dude….don’t go that later money nonsense. Because, Hank, you’re literally playing on the upper deck of the Titanic. Frankly, you’ve lived a lot longer than I thought you would.

He should have told them to go pound sand.

Jr should have invited ESPN to pound sand … it’s not his brand that needs the help. Besides, letting him go was just a symptom.

Take their money and run Hank!

This happened to one of my favorite computer magazines, Wired. Back in the 90s, they had an article by Neal Stephenson, sci fi writer, on the people and companies that were laying undersea cable for the Internet. It was the best technical article I’ve ever read in my life.

Fast forward to 2017, and they’re publishing articles like “The Doomsday Seed Vault Flooded, Thanks Global Warming”, which came out of their “Climate Desk” collaboration with the Guardian, and was immediately debunked as the area around the vault floods every single year, and the seed vault is designed to handle it.

And, then today they have a hand wringing article about the low participation of women in Open Source software projects. What they don’t mention is that most of those projects are, or at least started out as, volunteer efforts that literally anyone can start, assuming they have the time & technical skills. Instead its just another problem that’s all men’s fault.

So yeah, sports fans want their ESPN back and I want my Wired back. Hopefully we will if we just ignore and/or laugh at them long enough.

The past is another country…. we want to visit it but can’t.

It’s totally OK to call the Pres Hitler now, so they’re down with Hank again. Won’t help the ratings unless he’s doing the play-by-play, though. 😉

Not only has ESPN tanked, so has football. What boring crap. I may tune in for the opening to hear Hank but I can’t even watch football anymore. Golf is more exciting to watch.

Maybe he should make them play “Keep the Change” at half times?

ESPN is a left wing bunch of losers and so are the bulk of the players in football. I’m done with both. Taking up ice hockey.

Now ESPN will lose the left-leaning audience they’ve catered to.