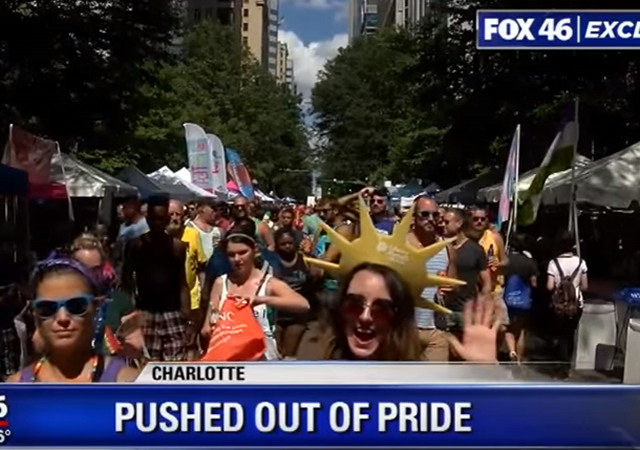 Unlike his predecessor Barack Obama, President Trump entered office as a supporter of gay marriage. Yet the gay community, which is overwhelmingly leftist politically, acts as if we elected Pat Robertson last fall.

Gay Trump supporters in Charlotte, North Carolina applied to have a float in the city’s gay pride parade and were told they are not welcome.

Those who preach tolerance and equality are normally the least tolerant and least equal of all.

That’s why I was not terribly surprised to learn that organizers of a gay pride parade in Charlotte, North Carolina, banned a group of pro-Trump gays.

“Gays for Trump” had submitted an application to display a float during this year’s Charlotte Pride parade.

“It was going to support Donald Trump,” group spokesman Derek Van Cleve told me. “It was going to be a patriotic float with American flags and a few ‘Make America Great Again’ flags.”

He also said the float would be populated with a number of drag queens – dressed as Uncle Sam and the Statue of Liberty.

“We wanted to have a couple of drag queens on the float dancing in ‘Make America Great Again’ dresses,” he said.

Charlotte Pride, which runs the parade, released a statement:

“In the past, we have made similar decisions to decline participation from other organizations espousing anti-LGBTQ religious or public policy stances,” the statement read.

Isn’t that interesting? Someone should make sure the organizers of the St. Patrick’s Day parades in Boston and New York are aware that it’s OK to exclude certain groups from participating on such a basis.

Here’s a video report from FOX 46 in Charlotte:

There has never been a more gay-friendly Republican President than Donald Trump. At the Republican convention which nominated him, gay Trump supporter Peter Thiel received a standing ovation after announcing that he was proud to be gay and a Republican American.

What’s playing out in Charlotte is proof that for all their complaints, the left doesn’t want Republicans to accept gay people. It robs them of a narrative they lazily cling to during every election that Republicans are homophobic bigots.

You know, the kind of people who ban others from marching in parades.

There are Trans-gender Trump Supporters.

Bruce Jenner is a conservative and supported Trump last year.

However, you would never know it from the MSM’s massive Sins of Omission.

Remember all the Leftist Democrats have been doing for about the last 60 years is play the classic “Divide and Conquer.”

They don’t care about any minority rights or anything they claim.

Leftists are intolerant, narrow-minded bigots who fear any independent thought because they don’t know how to discuss and defend their positions. They can only impose their positions on others by demanding that the others shut up.

notamemberofanyorganizedpolicital in reply to chessy. | June 9, 2017 at 3:08 pm

That’s also how they get their Leftist Sexual Jollies IMO.

The wrong kind of ghey!!

Take note of every company that’s represented in the parade, then call them and special order something with a pro-Trump message/theme. When they refuse, sue them aggressively.

Once again, celebrating tolerance and inclusion, approval and affirming acceptance of ANY lifestyle on the planet…..

.
…except for anyone who is not 100% embracing of EVERYTHING they believe in, down to the last little piece.

A message to the gay Trump group:

Dare them to stop you. Make sure the cameras are rolling. Be polite, be firm, have fun, and force them to live up to their ideals.

See, we red-political types can read Alinsky too!

Why would they hesitate to have the police remove them? They wouldn’t think twice about it, and nor should they. They have the same right to have their parade express the message they want to express, and not to have it subverted to express the opposite message, that the Hibernians have on St Patrick’s Day, and that Trump had at his rallies, or that the Celebrate Israel parade has to exclude people marching under an anti-Israel banner.

Of course, Milhouse, and I wouldn’t expect anything different.

Which is why I’d have audio and video from every angle when they do it.

Make the other side live up to its own rules, Mr. Alinksy said…

But what use would that audio and video be to you? Why would they be discomfited by it? It’s perfectly normal and accepted to keep a private event on-message and exclude those who would disrupt it. Try holding up a R sign at a D campaign rally or vice versa and you will be removed. ILGA to this day cannot march in the Hibernians’ parade.

Oh, I think I understand now what you mean. The ordinary bystander, who thinks this is just a parade for gay pride, a cause he presumably supports or he wouldn’t have turned out to watch, should be made to understand that it’s actually a Democratic Party rally, and doesn’t represent the whole gay community. Fair enough.

In the same way I suppose there are bystanders who think the St Patrick’s Day parade represents the whole Irish community, and should be made to understand that in fact it only represents those who hold the traditional Christian point of view (which you’d think people should expect, it being a Xian saint’s day after all).

It started out all they wanted was Equality. Now they can get a marriage license in every courthouse in America. Stop with the parades; you’re equal so quit trying to be different.

Just as black Trump supporters are not authentically black, so with gay Trump supporters. Approved victim status is conferred and removed by the left according to adherence to their orthodoxy.

No, it isn’t, and you know it very well. It’s discrimination against Republicans, which is perfectly legal.

Not only that but it’s an exercise of the organizers’ freedom of speech; the parade is a private event, designed to express a specific opinion or range of opinions, and it would violate their freedom of speech to force them to dilute that message by allowing the opposite opinion to be expressed from the parade. Come on, this is settled law, as you well know.

Someone should make sure the organizers of the St. Patrick’s Day parades in Boston and New York are aware that it’s OK to exclude certain groups from participating on such a basis.

More dishonesty from you, since you know very well that they already know it, since they do so every year, and they’re the ones who obtained the Supreme Court decision upholding their right to do so.

Maybe they should just be honest: this is not about being gay, but belonging to a political party.

And the left doesn’t want gay people to accept Republicans!

To the left, this is a war. Their tactics are simple. The Pro-Trump gays need to show up for the parade not with passive cameras, but with a group of people like the Patriot Guard Riders or whomever (being gay not a requirement) will protect them from the thugs and not fly the white flag of surrender.

The left is a bully. Alinsky described the tactics of a bully. With a bully, you only have three options:
a) escape (leave the USA in this case?)
b) submit (let them rule over you)
c) destroy them (bullies are cowards)

I assert there are no other options. As a cop long ago, I saw all three tactics employed–mine was option c.