Her first ever title! 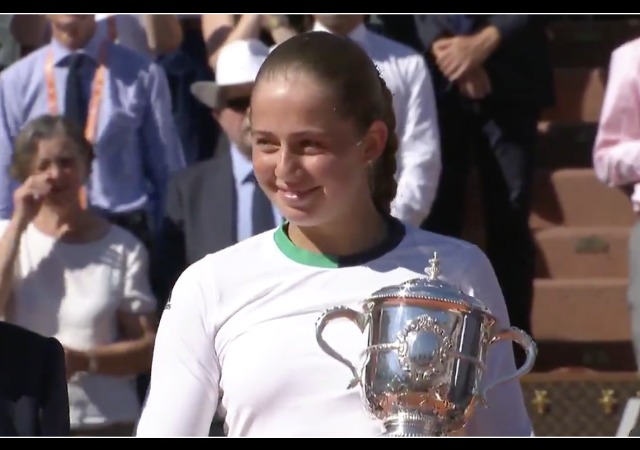 This is her FIRST ever title. She’s also the first Latvian to win a Grand Slam and the first unseeded female to win the French Open in the Open Era. From The New York Times:

Halep, a 25-year-old Romanian, would have secured the No. 1 ranking by winning, but she faltered, just as she did in 2014, when she lost her first French Open final in three sets to Maria Sharapova.

Like Sharapova, Ostapenko is a powerful and fearless hitter from the baseline, addicted to risk and capable of producing winners in flurries.

She turned 20 during the tournament and was still a teenager when she lost the first set of her first-round match against Louisa Chirico of the United States. But Ostapenko rallied, just as she would against two much more experienced players — the 2011 United States Open champion Sam Stosur in the fourth round and the former world No. 1 Caroline Wozniacki in the quarterfinals.

Her playing style and ability to generate big power off the rise have elicited some comparisons to a young Monica Seles, but unlike Ostapenko, Seles hit with two hands on both her forehand and her backhand. She also was a much more consistently composed competitor.

Ostapenko has tended to be unpredictable and volatile. Last year, she threw a racket during a tournament in Auckland, New Zealand, that bounced off the court and struck a ball boy. But she held herself in check at Roland Garros and now will climb from No. 47 in the world rankings to No 12.