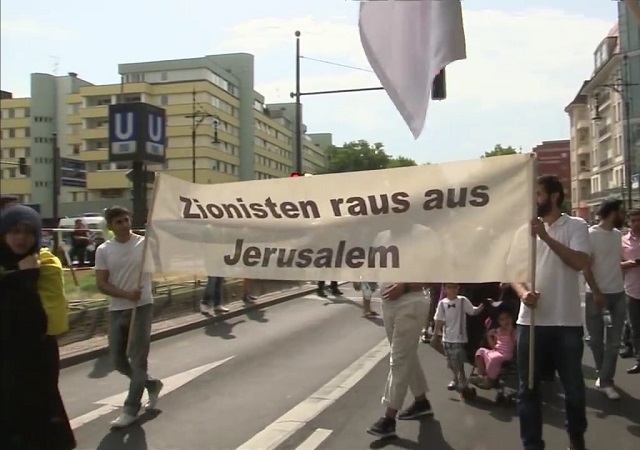 The French-German broadcaster ARTE has reportedly shelved a documentary on antisemitism because it doesn’t bash Israel enough. ARTE and WDR, the publicly-funded TV networks that commissioned the 90-minute documentary, have decided to confine the film to the archives, calling it “unbalanced”. “You can’t make a film on antisemitism without saying every three minutes that the Palestinians are the victims of Israelis,” the co-producer of the documentary, Joachim Schröder, told The Jerusalem Post.

The documentary makers reject the objections publicised by the broadcasters as eyewash. “It’s not about balance,” Schröder was quoted saying in the German newspaper Bild, “How can a film on Antisemitism be ‘balanced’? ARD with offices in Strasbourg is obviously fearful of calling out the Jew-hatred in France and Germany.” Both ARTE and WDR are financed by German taxpayers.

The Central Council of Jews, the umbrella organization for the Jewish communities in the Germany, also refuses to buy the official explanation given by the broadcasters either. German weekly Zeit reported:

The latest controversy raises questions about whether German media giants are trying to suppress the truth about antisemitism in Europe’s growing Muslim communities, as well as the involvement of the EU and European governments in financing anti-Semitic groups posing as NGOs. According to German newspaper Bild, the documentary uncovers the role of European Christian charities such as Brot für die Welt und Misereor funding anti-Israel boycott campaign, or BDS movement. The country’s largest circulating newspaper Bild writes:

Did you know that [Christian charities] Brot für die Welt und Misereor fund boycott campaign against Israel? Or that the EU and European churches along with the United Nations invest 100 million Euros annually in organisation that primarily run anti-Israel campaigns?

If WDR and ARTE have their way, you would never know about it.

For a documentary on “Antisemitism in Europe” is laying unaired for months in the archives of the public broadcasters. Reasoning: The movie focused “mainly on the Middle East” instead of Europe. Additionally that documentary isn’t sufficiently “multi-perspective” and lacks “balance.”

The German daily Bild further questions the motives behind to suppress this widely acclaimed documentary on antisemitism:

The movie covers a wide range, from the hate-filled tirades of the Palestinian President Mahmoud Abbas (“Rabbi’s in Israel calling for the poisoning of our water in order to kill Palestinians”), and the support for anti-Israel campaign by churches, EU and UN organisations, to the Jew hatred and Islamist propaganda in Germany and France, to the terror attacks in Paris that force the Jews to emigrate. [Author’s translation]

It is unclear what bothers the German and European political establishment the most: the uncovering of the truth about their own complicity in financing and fermenting anti-Israel hatred, or the painful truth that the Arab and Muslim mass-migration — they sold everyone as diversity and “multiculturalism” — is fanning the dormant flames of antisemitism in Europe all over again. Mass-migration, instead of making Europe more tolerant, is invoking the very spectre that led to Europe’s near-annihilation almost eight decades ago.

How Europe choses to deal with antisemitism will decide the fate of the continent.

A mere glance at world history will show why antisemitism isn’t something for the Jews to be wary about alone. The Jews have survived the near cyclical outbreaks of antisemitism throughout the recorded history — albeit at a horrendous cost, but those who nurture this contagion in their midst have faced utter ruination themselves. If antisemitism is pernicious to the Jew it seeks to target, it is fatal to the host who harbours it.

“How Europe choses to deal with antisemitism will decide the fate of the continent.”

I think continental Europe already made that choice, 80 years ago – They’re all for it, always have been, and apparently always will be. The US and Great Britain teamed up and punished them mightily the last time they let their arrogance come to a head, and like whipped dogs they’ve been hiding in the corners trying to pretend to be good ever since.

But old habits die hard, and the typical continental European attitude is resurfacing. Except this time it apparently is going to be the hordes of people that they gladly importing who are going to burn their cities to the ground.

Krykee doodle. I understand the persistent parasitic greed of leftists to confiscate other people’s $$$ to fund their malevolent agenda, but the h3ll is it with Europe and Jew hatred??

I’m as Germanic as they come in America: red hair, pastey white Christianista heritage, with a horribly Prussian sir name… Heck, my grandfather was even named Adolph (no, not that one).

I just don’t get the Jew hatred.

Oh, Europe!’Never again’ called and wonders ‘What have you done for me lately?’

Trying to understand anti-Semitism is like applying logic to emotion: it doesn’t work.