“The Russian government did not through any cyber intrusion alter ballots, ballot counts or reporting of election results.” 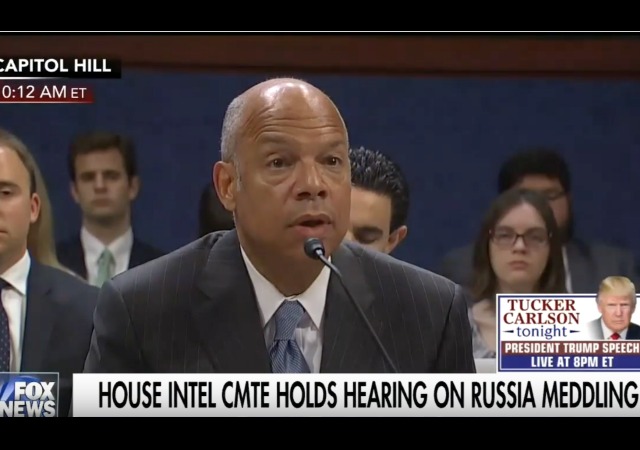 Former Department of Homeland Security Secretary Jeh Johnson testified before the House Intelligence Committee over the Russia probe into possible interference and collusion into our presidential election.

Last summer, the Democrats accused the Russians of hacking into their system after a trove of emails appeared on Wikileaks. But Johnson told the committee that the DNC didn’t want DHS’s help with the investigation.

Instead of accepting help from DHS, the DNC decided to hire a private cybersecurity firm.

“This was a question I asked repeatedly when I learned of [the hacking]—what are we doing? Are we in there? Are we helping them discover the vulnerabilities, because this was fresh off the OPM experience and there was a point at which DHS cybersecurity experts did get in to OPM and help them discover the bad actors and patch some of the exfiltrations, or at least minimize some of the damage,” Johnson said referencing the hack at the Office of Personnel Management.

“I was anxious to know whether our folks were in there, and the response I got was the FBI had spoken to them. They don’t want our help. They have CrowdStrike,” he said. “That was the answer I got after I asked the question a number of times over the progression of time.”

The DNC’s decision disappointed Johnson, who said that he “shouldn’t camped out” at its headquarters.

But DHS can only do so much. Johnson reminded the committee that the “department doesn’t have the power to patch vulnerabilities over the DNC’s objections.”

Johnson also showed disappointment when he discovered that there was a long gap between the hacking and the time his department found out. From The Washington Times:

Mr. Johnson added speculation to the ongoing scrutiny of fired FBI Director James B. Comey when he questioned the time delay between when the DNC and FBI first discussed Russian hacking — and when his department finally learned of the breach.

“The FBI and the DNC had been in contact with each other months before about the intrusion,” he said.

Johnson reiterated to the committee that Russia did not touch any votes during the election despite trying to influence the election outcome. However, he could not confirm if the emails leaks actually did sway public opinion from Hillary Clinton to Trump.

He also confirmed that while Russia, at the direction of President Vladimir Putin, orchestrated cyberattacks on the United States to influence the 2016 presidential election, Moscow was unable to actually alter ballots.

“To my current knowledge, the Russian government did not through any cyber intrusion alter ballots, ballot counts or reporting of election results,” Johnson said during his opening statement before the House Intelligence Committee.

Johnson fretted over the possibility it could happen and tried to warn everyone about possible cyberattacks. But Johnson and the DHS could not get anyone to pay attention since “the press and voters were focused on a lot of other things” last year.

He tried to protect the voting systems as early as January 2016. From The Washington Examiner:

“Those were the principal reasons for doing this. There are 16 sectors already that are considered critical infrastructure, and in my view, this is one thing that was sort of a no brainer. In fact, it probably should’ve been done years before.”

The email leaks over the summer made Johnson revisit his idea from January. Fox News continued:

In August, he said he “floated the idea” of designating the country’s election infrastructure as critical – which would allow election officials to get cybersecurity help. Johnson testified that multiple secretaries of states turned down his offer and viewed any aid as the federal government trying to Big Brother the election.

Boom. The DHS secretary said under oath what we have been saying all along. Russia didn’t “hack the election.” Whatever happened to the privately-run organization that is the DNC is irrelevant to the election process. No votes altered.

Actual hacking of votes was the first charge. Then “hacking” came to mean “general interference” of an unspecified nature. Then came “collusion,” a direct attack on Trump and his campaign staff. Every time a conspiracy story becomes untenable, the Dems move the goal posts.

It reminds of how “global warming” became “climate change”, that eventually became “climate instability.” The terminology changes every time the agenda starts to lose traction. Is that in the Alinsky playbook?

You know how Democrats/liberals tend to project onto Republicans/conservatives those dirty tricks and tactics they themselves commit? The minute I heard last summer that the Dems had declined federal help to investigate the Russian hacking of their servers, my first thought was those bastards have or are trying to get the Russians to collude with them against Trump and the GOP.

There’s obviously something on those servers they didn’t want federal law enforcement to see. Maybe this is why they persist with the Trump/Russian collusion bullshit like Ahab on his whale. Criminals routinely try to deflect investigatory focus away from their guilty selves by setting up someone else for LE to chase.

Please correct me if I am wrong, but I seem to remember that the neither the FBI nor any other federal law enforcement agency ever inspected the DNC computers/servers that were allegedly hacked.I seem to remember that the highly partisan company Crowdstrike performed the analysis, “discovered”the Russian involvement, and then later recanted their findings. Somehow, despite this extraordinarily weak evidence, the story has morphed from the Russians may have been involved into 157,297,241 government intelligence agencies have conclusively shown the Russians to have hacked the DNC computers.
>
Additionally what I do not understand is how Russian hacking capabilities have changed so much. For the years leading up to the 2016 election, we were constantly told of how sophisticated Russian hackers were. They could break into just about any computer, rummage around, take whatever they wanted, and you’d never know they had been in there. Suddenly, during this last election when they hacked the DNC computers, these Russian hackers became so incompetent that they left all sorts of blatant evidence of them being inside the DNC computers. This begs the question of how did the Russians go from being the world’s best to utterly incompetent?
>
More likely the Russians were there as were a multitude of others (who left the Russian “evidence”) and that the DNC did not want the world to know about their own incompetence in maintaining computer systems so this story was created and then aided and abetted by government intelligence agencies.
>
This also begs the question that since the DNC computers were so easily hacked, then why should we believe that Hillary’s computers (having all that classified information on them) had NOT been hacked since they lacked even rudimentary cyber security and how Hillary and friends refused to allow their computer to be analyzed by the FBI and others?

I think the answer lies in Wikileaks…..remember how it was revealed that the CIA has programs and tools that allow them to “simulate” hacking from bad actors? I love my country, it is the Government I don’t trust!

That the DNC servers and Podesta’s emails were gained didn’t phase the DNC, until they were leaked by Wikileaks. The active collusion between the DNC, the HRC campaign and the MSM to essentially deny Bernie Sanders the nomination was what triggered their actions. It would have been the logical thing to do to have the FBI investigate the matter. But, the rank and file of the FBI, unlike its director and upper management, was not tightly controlled by the Dems. There were probably things on the server that the DNC would not relish explaining. So it ends up at Crowdstrike, a private company with some interesting ties. And, the report made by that company was based upon reports of vague “evidence” of attempted intrusion from locations within Russia by hacker organizations which are “suspected” of being tied to Russian intelligence agencies. When this was made “public” by James Clapper, he stated that 17 US intelligence agencies agreed that the Russian government was responsible. Actually, there were only 3 US intelligence agencies which were even peripherally involved. The FBI, CIA and the Office of the Director of national Intelligence. Whether the FRussians attempted to hack anything in the US would be totally outside the duties and authority of most of the US intelligence agencies to investigate. It is, therefor, doubtful that any of them was in any position to comment on the accuracy of the DNI assessment.

As to tha competency of the hackers, what hackers? All of this hacker nonsense is pure speculation. We have NO reliable evidence that the DNC servers were hacked by an outside agency at all. And, the Podesta emails were obtained through the use of a popular phishing technique. To top it all off, we have seen Wikileak releases of CIA documents, which graphically lay out methods whereby the CIA can engage in active computer intrusions which will leave footprints of other agencies, including other state-run intelligence agencies.

Now, the most telling thing here is how the Wikileaks release of the DNC data and the Podesta emails were immediately blamed upon the Russian Government. Intelligence agencies do not usually work this way. Compromising information is useless to gain or maintain control of a subject, once it has been released. Usually, its existence is made known to a subject and the threat of release of said information is used to leverage the desired actions and cooperation of the subject. In the case of the DNC info, it was used largely as revenge against the DNC and HCR for the party’s treatment of Bernie Sanders and his supporters. HRC’s past behavior, especially with regard to the Russians, would suggest that she would have been accommodating anyway, and even more so, if Russian intelligence was in possession of the DNC server and Podesta email data. Its release is counter intuitive if one is theorizing that the Russian government was attempting gain significant post-election treatment from the US.