Because nothing says Fight the Patriarchy!™ like wearing lipstick? 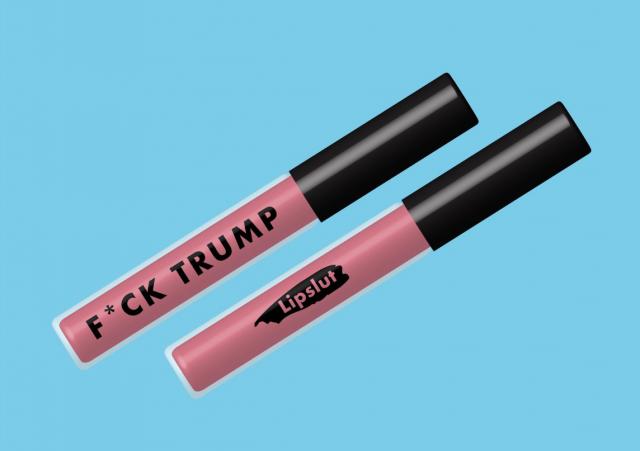 Lipslut, a soon to be launched lipstick brand offers one whole color of “mid-tone nude pink” lip gloss for the woman looking to change the world.

Called “F*ck Trump” (OMG SO EDGY), Lipslut was designed by a college student to “fight the patriarchy” and “empower women everywhere”. This is the only credit I’ll give them — 50% of the purchase price goes to charity. Which charity, you ask? Whichever charity the Lipslut democracy votes for!

The makers of the neutral hue hope to appeal to liberals and conservatives alike (good luck with that, kiddos).

What is Lipslut about, anyway?

Birthed in the aftermath of the 2016 presidential election, Lipslut was founded in Los Angeles by a group of jaded romantics. We’re a middle finger to the current socio-political landscape and practices found in the cosmetics industry. We pride ourselves on taking action and putting our money where our mouth is. While trends may come and go, we believe questioning the world around us and working towards improving society will always be “in vogue.”

Expect us to provide the best possible products, and to work hard towards solving the issues you care about. Join Lipslut on our path to changing the world one face at a time.

Let’s just say we aren’t too pleased with our current socio-political landscape, and the standards of the cosmetics industry in general. Chances are you aren’t either. Rather than complaining, we’re putting our money where our mouth is.

Use “socio” as a prefix and your cause du jour is automatically totes serious.

Just see for yourself:

Every single thing about this is just sad. And ignorant. Including the claim that, “Lipslut is fashion, subversion, and a middle finger to the current sociopolitical landscape.”

It must be said: WEARING LIPSTICK IS NOT SUBVERSIVE. Subversive against what, exactly? The people with life experience, jobs, and common sense who voted to keep the country from being flushed down the crapper? Lipstick may not have always been fashionable, but it has never been illegal in western cultures. And while I’m at it: YOU WILL NOT CHANGE THE WORLD BY WEARING LIPSTICK.

But, this whole campaign does prove at least one, if not several or even all of the following:

I’m curious about how long these moonbats can sustain their moral outrage. Months? Years? It’s truly a wonder to behold.

Also, I find it ironic that if this enterprise became an ongoing commercial success, that in itself would provide all the evidence of the empowering nature of our capitalistic system over their desired command economy.

Less than a majority of the nation believes this crap – but of those who do are part of a cult, or are just popular culture morons. So there’s business to be had.

Every cult rips-off their followers. Why no the progressive cult? They do it all day long by ripping off college kids, sticking them with life-long loans for useless degrees – all while living high on the hog of the proceeds of the loan money.

Talk about the Soviets…

Reminds me of the old advice, “Eeeww, don’t get your lips on it!” Or don’t get it on your lips. Either will do.

But I don’t think that’s a “neutral” color. Looks a bit “Pinko” to me.

Expect us to provide the best possible products …

We are so overdue for a Slut Walk. Preferably in a high humidity locale. Fight the Patriarchy!

You know what would be funny?
If it was someone like Milo behind it, and the charity is something like “The Protect Life Foundtion”.

Sadly the video won’t play on brave. Is there a youtube version?

Sandra Fluke will demand taxpayers pay for it.

How about “F-you, Loser!” lipstick?

Give it right back to these crazies. They’ll fold.

Remember, this is fluff for the left and people in their media bubble. Slowly, that bubble is leaking: witness The Donald’s 50+% approval rating with EVERY ounce of energy of the corrupt American media and educational system against him.

The truth is, Trump’s popularity rating is higher than is being revealed, and obama’s was lower than anyone was willing to admit. Obama is also dumb. Trump is a self-made savant.

Calvin Klein has introduced a new line of cosmetics to honor the 45th PRESIDENT!

However much the (Lip)sluts may want to F*ck Trump, I don’t think he’s interested.

I know that’s not what they meant, but they really need to consider their messaging.

notamemberofanyorganizedpolicital in reply to Formerly known as Skeptic. | June 20, 2017 at 7:14 pm

Yeah! Their Freudian Slips are showing……..

I grow weary of hearing fowl language. It cheapens anyone’s message. Some seek shock value. Younger ones think it is something new. Others think that it makes for a stronger message. I think that it only shows an inability to express oneself.