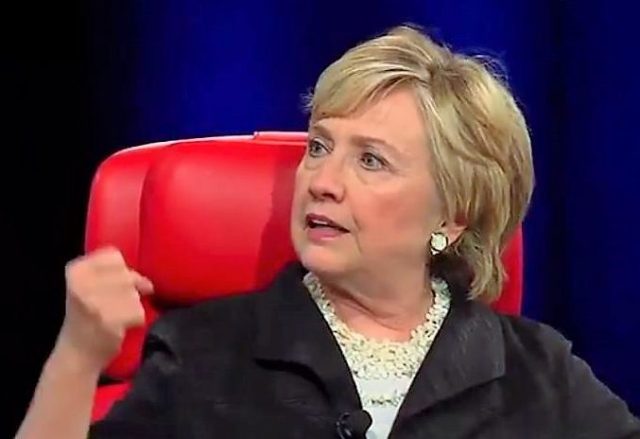 In her latest round of excuses for losing this week, Hillary Clinton laid blame at the feet of the Democratic National Committee. People at the DNC are not happy about it and are pushing back.

The former director of data science at the Democratic National Committee blasted Hillary Clinton on Twitter after she tried to blame the DNC for her electoral defeat.

Clinton claimed Wednesday that the DNC fell far behind the RNC in terms of voter and data analysis, saying the DNC’s data was “mediocre to poor, nonexistent, wrong.”

“I had to inject money into it,” she said.

Andrew Therriault, the former director of data science for the DNC, called those claims “fucking bullshit.”

“DNC data folks: today’s accusations are fucking bullshit, and I hope you understand the good you did despite that nonsense,” he tweeted.

Aaron Blake of the Washington Post has more including a tweet which has screen caps of Therriault’s now deleted tweets:

Hillary Clinton has found plenty of non-Hillary Clinton things to blame for her 2016 loss, including Russia, James B. Comey, debate moderators and misogyny. But her decision Wednesday to add the Democratic National Committee to that list is predictably proving pretty sensitive inside her own party.

A top former DNC aide tweeted overnight that Clinton’s allegations were “f‑‑‑ing bulls‑‑‑” and even suggested that the Clinton campaign ignored its warnings about how competitive Michigan, Pennsylvania and Wisconsin were. Those three states proved decisive for President Trump and, especially in the case of Michigan and Wisconsin, were neglected by the Clinton campaign.

In a Wednesday appearance at Recode’s Code Conference in California, Clinton pointed to the DNC’s data deficit when she became the Democratic nominee.

“I set up my campaign and we have our own data operation. I get the nomination. So I’m now the nominee of the Democratic Party. I inherit nothing from the Democratic Party,” Clinton said, according to a transcript. “I mean it was bankrupt, it was on the verge of insolvency, its data was mediocre to poor, nonexistent, wrong. I had to inject money into it — the DNC — to keep it going.”

If you can believe it, even CNN reported on this. Eric Bradner has the story:

Democrats to Clinton: The DNC’s data was fine — you just used it wrong

John Hagner, a partner at Clarity, added: “I worked with DNC data every day last cycle, on winning Gov races. It was accurate and up-to-date and I’m grateful for their hard work.”

Many Democrats noted that Clinton — just like her opponent Bernie Sanders — had access to the DNC’s data from the outset of her campaign. Therefore, they said, if there was trouble with the data, her staff would have known long before she won the Democratic presidential nomination.

Hillary Clinton simply refuses to accept what most people can see plainly. She was a terrible candidate who ran an awful campaign with no real message. She also represented the status quo at a time when people wanted real change.

notamemberofanyorganizedpolicital in reply to clintack. | June 5, 2017 at 4:57 pm

Isn’t that the bridge to nowhere they built?

Lots of dead people just weren’t excited about Hillary enough to actually vote for her. I know this is troublesome to her because she likes to have people bumped off that cross her, but these voters are already dead.

She left out “The sun was in my eyes.” —Ann Coulter

Sounds like something she’d say to Bill as he’s headed out the door for the night.

Can you imagine hillary clinton’s vagina?

Someone get a nice, big mirror for #TheBlameLady!

She doesn’t need one – she knows she’s a loser.

Nonetheless, she still thinks she can buy winning, like some losers have (namely, obama.)

But she can’t even do that right.

She bought into the blue wall nonsense and felt she could ignore the rust belt.

Take a good look DNC.
THIS was your candidate.

Fun watching clinton fade away during the campaign:
https://www.youtube.com/watch?v=H8yF4ckv92g

Anonymous sources inside the Secret Service also revealed Hillary still smells “like a dead pig,” and a fly famously landed on Hillary’s face during the second presidential debate:
https://www.infowars.com/bills-ex-explains-why-hillary-attracts-flies/

Seth Rich was a data analyst , Seth Rich worked for DNC ????Hillary implied that someone with a Data background had to fill in the Russians .
Therefore Seth Rich worked for the Russians and if it is determined that he was the leaker, ( which I believe the Dems have no idea) then ergo the Russians must have killed him????
Hillary burnt a lot of bridges ,Wednesdaytheremust be something more than just her ego .
They are setting up an insurance policy.

Only a superb candidate would ever attempt to eventually blame so many different people, agencies, and nations.

It’s beginning to sound as though the Democrats are thinking it was good that Hillary lost given here behavior after the election.