Could go for $15 million at auction. 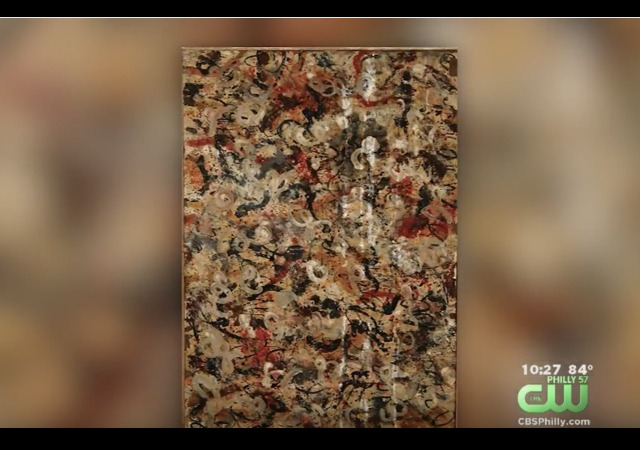 The piece Levine credits to Pollock is an untitled gouache in the abstract expressionist style. It measures 22 1/2 by 32 inches. It was created on paper, which is glued to a Masonite panel. The artist used mixed media, including enamel and water-based paints. Levine estimates its presale value is $10 to $15 million, adding that it would be higher if it could be authenticated as a Pollock painting.

Pollock died in 1956, and the painting is unsigned. So, proving it’s a Pollock isn’t easy.

But that hasn’t stopped Levine from trying.

He hired a private investigator to help him research Gordon’s connections to the New York arts scene, where Pollock was a staple during the 1940s. And he had a forensic scientist evaluate when the painting was created, based on the materials used. Forensics date the piece in the mid-20th century, Levine says.

“I’ve spent 200 hours researching the painting,” he says. Levine estimates the research has cost about $50,000 out of his own pocket.

“I’m convinced it’s a Jackson Pollock, but nobody will attest that it’s by Jackson Pollock,” Levine says. That’s the case for Pollock works in general, he says, because of industry concerns about forgery and legal issues.

Levine isn’t just certain that Pollock did the painting.

He’s also got a theory about when it was created, based on findings by the experts he hired. “I believe this painting was one of Pollock’s missing gouaches in his catalogue raisonné or from the period of 1945 to 1949,” he says.