Dem Operative on MSNBC: Kushner “Lucky he’s not in Jail . . . Guilty of a Crime”

Dem Operative on MSNBC: Kushner “Lucky he’s not in Jail . . . Guilty of a Crime”

Why should MSNBC wait for actual evidence, when it has an anti-Trump political operative to declare guilt? 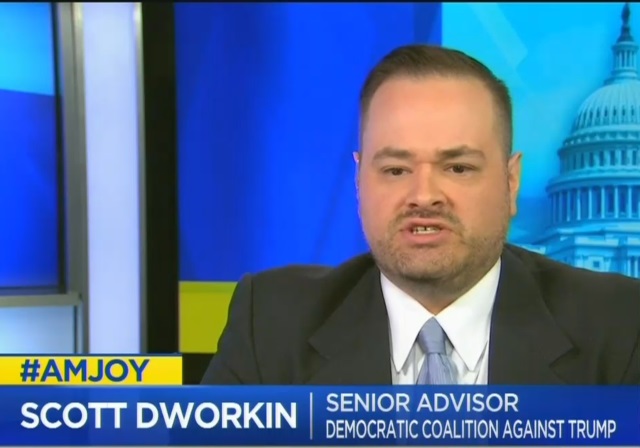 On Joy Reid’s MSNBC show this morning, Democrat operative Scott Dworkin, after saying that Jared Kushner is “lucky that he’s not in jail at the moment,” flatly claims that Kushner is “guilty of a crime.”

There was something about Dworkin and his glib, unequivocal accusations that didn’t seem quite right. Googling yielded the fact that he has been the object of scalding criticism from the left and right.

From the left comes this Daily Kos article describing Dworkin as a “self-aggrandizing hack.”

Then there’s this article, noting that “for fun,” Dworkin was trying to persuade DC-area restaurants not to serve congressional Republicans planning to repeal Obamacare. And here’s Dworkin being mocked for suggesting that Putin was supporting the Republican replacement for Obamacare because he wanted to “kill as many Americans as possible.”

I was also struck by Dworkin’s claim that he would have been fired and locked up if he did what Kushner has done when Dworkin was “working for Obama.” Dworkin’s website describes him as a “veteran of both the 2008 and 2012 Obama campaigns.” Not sure what being a “veteran” of the Obama campaign means – Does anyone remember him doing anything significant?

Is Dworkin what Reid and MSNBC consider a worthy, serious commentator on the events of the day?

JOY REID: Scott, in your view, and you have spent a lot of time looking into this, the business connections between Trump associates and Russia, do you think that Kushner et al. have anything to worry about here?

SCOTT DWORKIN: I think Kushner’s lucky that he’s not in jail at the moment.

He shouldn’t be there at all. He lied on his forms, on his background check. And for me, if I had done that when I was working for Obama, I would have been fired, I would have been locked up. And there would have been no doubt about it. Nobody would have asked any questions about it further. He’s guilty of a crime and he definitely should not be in the White House at the moment.

I am reminded of the nightly calls that Darth Cheney be perp walked for “Plamegate.” Never mind that it was known fairly early on that nothing illegal happened since she was not an agent, her cover having by blown years earlier, and the unclassified leak to Novak came from Richard Armitage at the State Department.

joy reid & mslsd…. hope the Republicans cover watching that stuff as pre-existing mental conditions so they can get meds when it finally implodes

Do they go to central casting for their operatives? They all look and sound like thugs. Then again, there is that if it looks like a duck thing….

how many valium do you take before watching Joy Reid? I’m astonished you can still function?

By the way, looks like we’re virtually neighbors. I live in Granbury.

“Why should MSNBC wait for actual evidence, when its has an anti-Trump political operative to declare guilt?…”

Why in the world should a fascist propaganda organization wait for evidence any more than, say, the kangaroo court of a fascist nation?

A generation of obamas has been unleashed on America: ignorant, arrogant and incompetent. And fascistic.

The battle is on to overcome them, and destroy the corrupt institutions creating them.

Why would anyone give a shit what a cable TV ‘news’ outlet universally known for leftist propaganda has to say about anything? It’s like pointing a camera to the east every morning to see if the sun will rise again.

Andrea Dworkin has a brother? He sounds every bit as silly.

I’m going to withhold judgment until I hear from Michael Moore.

Democrats: “Kushner is guilty of a crime because we don’t like him or his father-in-law”.