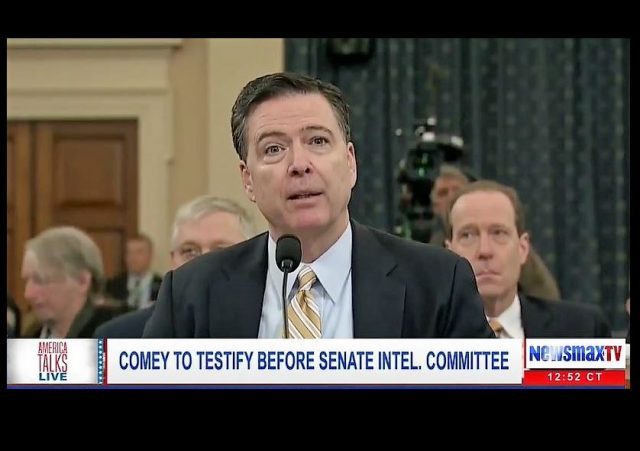 On Thursday James Comey will testify before the Senate Intelligence Committee.

It will be the Greatest Show on Earth that day, broadcast live by every major network:

“The Young and the Restless” will be preempted by a different soap opera on Thursday. The star will be former FBI director James B. Comey.

In a rare move, CBS is scrapping its daytime lineup to carry live coverage of Comey’s testimony before the Senate Intelligence Committee, and NBC and ABC are doing the same.

This is a big deal that places the Comey session on a shortlist of congressional hearings deemed worthy of live airings on broadcast television — a list that includes the Army-McCarthy hearings in 1954, Watergate hearings in 1973, Iran-contra hearings in 1987, Anita Hill-Clarence Thomas hearings in 1991 and President Bill Clinton impeachment hearings in 1998.

Washington politics has often been described as sports for people who weren’t all that good at sports. If that’s true, then Thursday’s congressional testimony by fired FBI Director James Comey is this town’s Super Bowl.

The networks are covering it live because Comey is their best hope to justify the Russia-mania of the past six months. Will Comey finally unload a dumpster full of collusion and/or obstruction evidence on Donald Trump’s head live on network TV?

We won’t know, of course, until we get there, but ABC News is lowering expectations with at report that Comey will not accuse Trump of obstruction of justice:

There will be much in former FBI Director James Comey’s upcoming congressional testimony that will make the White House uncomfortable, but he will stop short of saying the president interfered with the agency’s probe into former national security adviser Michael Flynn, a source familiar with Comey’s thinking told ABC News.

Although Comey has told associates he will not accuse the President of obstructing justice, he will dispute the president’s contention that Comey told him three times he is not under investigation.

The president allegedly said he hoped Comey would drop the Flynn investigation, a request that concerned Comey enough that he documented the conversation in a memo shortly after speaking with the president. In the memo, according to sources close to Comey who reviewed it, Trump said: “I hope you can see your way clear to letting this go, to letting Flynn go,” during a February meeting.

The request made Comey uncomfortable, but the source tells ABC News that Comey has told associates he will not accuse the President of obstructing justice.

“He is not going to Congress to make accusations about the President’s intent, instead he’s there to share his concerns,” the source said, and tell the committee “what made him uneasy” and why he felt a need to write the memo documenting the conversation.

Comey will testify "as a fact witness and will leave the legal analysis for others," source close to former FBI director tells @jaketapper pic.twitter.com/x07psCUhxm

If this plays out, it will be as I predicted. Comey would have no issue making the accusation of obstruction of justice, if he were inclined to do so. His May 3 Senate testimony arguably did not address anything Trump did, as I explained in Here’s how James Comey can wiggle out of his May 3 testimony.

But Comey would be hard-pressed to allege obstruction of justice since he never reported it to DOJ (as far as we know) or in prior congressional testimony.

So the logical path for Comey is to say he was uncomfortable, but avoid assigning intent to Trump’s actions.

So it will be like what Comey did to Hillary, spend a lot of time painting Trump as a criminal but ultimately never make the accusation.

That, of course, is if the reports are accurate.

Comey’s testimony is not without risk to him and others. According to Circa, Comey has refused to answer numerous bipartisan Committee written questions about who Comey spoke with and shared information: 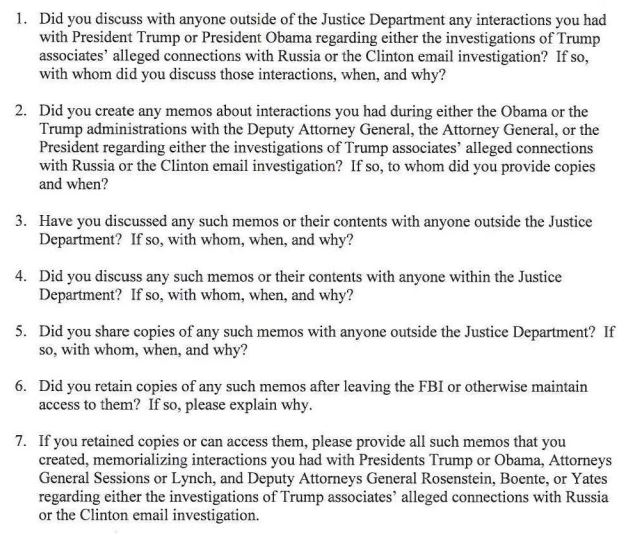 If that refusal extends to public testimony, the optics for Comey will be horrible.

As for Trump, he wishes Comey “luck” in his testimony:

If they had anything at all they would have leaked it.

notamemberofanyorganizedpolicital in reply to RedEchos. | June 6, 2017 at 8:22 pm

I was really expecting a “John Poindexter moment.”

That moment when all expectations of scandal are dashed.

True, but Whatevergate will soldier on, nonetheless thanks to Trump Derangement Syndrome.

There is no way Comey comes out better off for having testified. He may, however, believe that he can. Whether testifying in Congress or making a public statement, he always creates a firestorm of WTF. He will rue the day he came up with this diary ploy. Absolutely everyone in DC will have a reason to hate him.

And it doesn’t matter how the enemedia spins it either. Trump’s popularity with his base is not only growing, it is getting deeper and more intense. There is nothing Comey can do that will not build that intensity. America now understands that an elite cabal of corrupt globalists are determined to make America their plaything. Trump is the only thing stopping them. I can’t wait.

notamemberofanyorganizedpolicital in reply to Pasadena Phil. | June 6, 2017 at 8:24 pm

Just a week or two back, Newsmax TV reported polls found that 95% to 97% of Trump voters were still firmly, strongly backing “TRUMP!”

This whole thing is such a farce.

I think a lot of lukewarm Trump voters are now centipedes. I would guess he’s gained a point or two. I can’t think why any of his voters would be disappointed. As for democrats, I suspect most are disappointed in Hillary, an many are just lost. There is no leader or front runner.

centipedes? can you explain that comparison since it’s not real obvious to me.

Giant tropical centipedes share their territories with tarantulas.
Despite it’s impressive length, it’s a nimble navigator,
And some can be highly venomous.
As quick as lightning, just like the tarantula it’s killing,
The centipede has two curved hollow fangs which inject paralyzing venom.
Even tarantulas aren’t immune from an ambush.

This centipede is a predator

Here’s a great pic of a Texas centipede from Texas Parks & Wildlife.

and yes, I have run into one of these in the wild (was looking for fossils and one came out from under a shelf I was digging into) and they scare the hell out of you! They move in this weird raggly zig zag way, and they’re way faster and way bigger than any bug should be. Nasty poisonous, too.

If you were to go to the website Reddit, which is largely peopled by tech-savvy males 14-26, and navigate to the subreddit The_Donald,

you will find a boisterous, free-wheeling political pep rally in support of DJT that, incidently functions as the current fastest, most comprehensive world-wide news aggregator (in between repetitious jokes).

The quote from “rotten” is part of a script for a documentary that became popular, so that the denizens of The_Donald refer to themselves as “centipedes.”

The comment from Petruska relates to an ongoing discussion at The_Donald about how DJT has continued to gain support from people who were initially lukewarm, or nonsupporters, because he has set out with obvious determination and good advice to fulfill his campaign promises.

If, by R. Kipling

I watched the intelligence hearings, and each of them said that 1) There was no collusion between anybody in the Trump camp and the Russians that they could find, and 2) The real problem is the leaks.

They did a good job of keeping their poker faces as the Democrats tried to put words in their mouths.

So, this hearing will be about a leak.

It will be the Greatest Show on Earth that day, broadcast live by every major network

Why does this make me think of Geraldo Rivera and Al Capone’s vault?

I fail to see any value in a memo I wrote to myself.
I wonder if Comey is still writing more of them.

It’s known as “contemporaneous documentation”. Having a dated, written memo adds support to an individual’s recollection of past events covered in that memo. To what degree this support matters is a separate issue.

Of course, one can always create a memo today, with last weeks date…

Two problems here that I can see as a non-lawyer if there is ‘contemporaneous documentation’ of several of Comey’s meetings with Trump all nice and printed out on paper and stored in a folder that he presents at his testimony.

1) There’s no ‘datestamp’ on paper, so there’s no way to prove he didn’t type them up yesterday.

2) Work products of Presidential Appointees are (as I understand) property of the US Government, and are to be archived at the work site, and in particular, turned over when the appointee resigns/is fired. (Mostly to avoid #1 above)

My personal opinion of the Comey testimony: It will be the Opening of Al Capone’s Vault, redux.

If Comey did document his interactions with the Trump administration (and Obama and Clinton), those documents/tapes were most likely picked up by the incoming administration when they canned him, and he’s been acting like he didn’t keep any personal copies (my guess), so if he comes out and says X, the administration can come out and say, “Well, he wrote a memo to himself back on date ABC that stated Y, so I don’t know why he’s saying X now.”

Comey’s biggest problem is he thinks he’s too smart to get caught in a perjury trap. He’s wrong.

I was thinking “Al Capone’s Vault” too.

That is all besides the point and assumes some level of sanity by all the players. The mfm is after blood and regardless of how empty Comeys claims will be the mfm will spin his comments out of all context to their meaning!!

Correction: As demonstrated by Reality Winner, certain printers *do* date/time/origin stamp the documents they produce. There would be a certain sense of ‘petard’ should Comey produce a paper document which can be proven to be a backdated forgery.

Guess what I’m wishing for?

I predict DUD, but it will be fulltime fake news smoking gun material for a couple days.

Comey is a crook, owned by the Clintons.

Did or not, the media will spin it like a red headed step child.

I think this is EXACTLY it! The mfm will spin this like a crazy top and most likely take EVERYTHING so far out of context as to not represent reality (I guess this has been the medias standard operating procedure since November!!! ).

I practiced law for 50 years, part of which as a DOJ prosecutor, and would like your confirmation as to my understanding of the elements of “obstruction of justice” by a sitting President. I have personally seen several Presidents interfere with criminal investigations/prosecutions for obvious political reasons. Reagan terminated a grand jury about to indict British Airways at the request of Maggie Thatcher. How is what Trump is alleged to have said to Comey anywhere near being “obstruction of justice”?

I expect him to do what deep state intelligence officials did to Trump today. I you watch CNN they were running headlines all day saying that intelligence officials refused to say whether or not Trump tried to influence investigations. I believe the truth is he didn’t, but that doesn’t support the narrative. Instead by not saying he didn’t they imply he did while denying that they made that implication.