Andrew Bolt: “I’m sick of being sued and bullied and I’m not going to take it.” 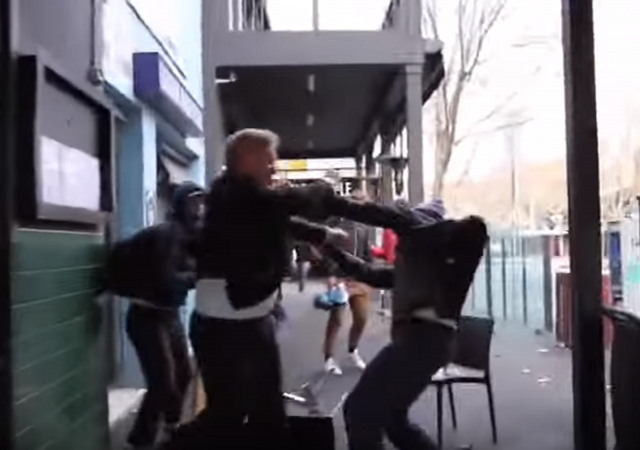 The conservative Australian writer Andrew Bolt was in the news this week due to an incident which produced a viral video. In the footage, Bolt is attacked by two masked Antifa type thugs but hits them right back.

CONTROVERSIAL columnist and TV personality Andrew Bolt has “clobbered” a group of masked protesters who set upon him in Melbourne yesterday.

On his TV program last night, Bolt explained how he was about to launch a book on US President Donald Trump at a restaurant in Carlton, in the city’s inner north, when a woman asked to take a selfie with him.

Before they could take the photo, two masked protesters set upon Bolt, spraying his face and suit with what he described as “sticky liquid with glitter and dye”.

The protesters may have got more than they bargained for because Bolt quickly retaliated, punching one of the attackers repeatedly.

“Bad luck for them, of course; I don’t do running and hiding,” he told his viewers on his Sky News program The Bolt Report on Tuesday night.

The conservative columnist screened security camera footage of the altercation on his show, freezing on the faces of each of his attackers as well as a third man who filmed the ambush.

The Sydney Morning Herald has more:

Behind the left-wing Antifa movement that attacked Andrew Bolt

A broad-daylight brawl between commentator Andrew Bolt and apparent members of the anti-fascist “Antifa” movement have raised concerns about the safety of high-profile conservatives, particularly in Melbourne.

Present at a number of wild and violent clashes with right-wing extremists and police in recent years, the Antifa group claimed members of its “family” were responsible for Tuesday’s attack on Bolt at a book launch.

Alarming footage posted to social media showed a hooded man throw a substance at Bolt’s head on Carlton’s Lygon Street, which then escalated into a violent scuffle, knocking over chairs of an outdoor restaurant.

The News Corp columnist and Sky News host fought back fiercely, landing kicks and punches on his assailants until they disbanded, while an unknown onlooker shouted: “What are you doing?” and “Go away”.

Bolt and other commentators told Fairfax Media they feared conservatives faced an increasing threat to their safety from far-left activists, especially in the Victorian capital.

Bolt is getting praised by some:

Another article from the Sydney Morning Herald has quotes from Bolt himself:

“We should be free to have a debate and to walk down the street without fear of being attacked.

“The right to free speech has to be better protected – everywhere but particularly in Melbourne. It is ridiculous how dangerous it is for conservatives in this town to speak out.

Remember a few months back when leftists were encouraging each other to “punch a Nazi?”

They weren’t kidding and the “Nazis” are anyone they don’t like.

So, are the Oz coppers looking for these assailants, or are they too busy arresting Islamophobes?

Of course they are looking for them! I mean there has to be a Jr. Mr. Bean hanging around with nothing to do…right?

The Left will continue this until they take casualties. Always the pattern. Then they will turn on a dime and cry victim!

They’re already crying ‘victim’: Melbourne Antifa, a loose collection of left-wing activists united behind “anti-fascist action”, appeared to claim a role in the incident, posting on Facebook that “some of our family in solidarity were attacked by Andrew Bolt while they were protesting today”.

The group argued Bolt should be imprisoned for his “violent, horrendous language”.

More evidence of the evil thuggish behavior of the fascist right-wing.

Beating up these poor children who were just trying to play a harmless prank!

And besides, the anti-fa types are no true leftists, dontcha know.

Let’s hope these professional cowards and their pals get broken arms and legs next time…well, at least their left arms and left legs.

One day these “antifa” cowards will be confronted with some real deal right wingers who will not be in the streets looking to set cars on fire or break store windows or get into confrontations with police. These right wingers are plentiful and will only be looking for masked “antifas”.

Do you see that though. It’s “right wing extremists” but the f#ck wits doing all the thuggery are merely mentioned as “anti-fascist antifa”.

Is it no wonder Bolt was physically attacked when the media us deliberately inciting hatred against anyone they don’t care for.

As I’ve said elsewhere, those two little antifairies should send a thank you note to the guy who came in and broke up the fight.

Andrew was just getting started.

When the People stand their ground and fight back.

The Australian Government has confiscated all the guns……that could have been acid used in the attack……try that in Texas why don’t ya lefties……oh….they’re armed there….

This is a war where your only options are to go on offense or lose. The leftists are forcing the choice and want us to continue to play defense so we will lose. Bullies are cowards. Great to see this. The GOPe is in shock of course.

Progressives are constantly projecting. You can be sure that if they’re calling conservatives “fascists” it’s be they (the progs) are the fascists. Actions such as the one caught on video here and elsewhere of masked goons assaulting people, destroying property, and engaged in intimidation is all we need to know this is true.

I’m pleased to see someone on the right fight back. It seems to be happening a little bit more all the time. The anti-Sharia protests today are a good start. Sean Hannity’s battle against the left’s effort to shut him down like O’Reilly seems to have worked so far. He has started an organization to fight back against Media Matters and other similar organizations undertaking the boycotts, riots, etc

That knee to the groin was beautiful. Perfect form. I have it a 9.5.

It’s a shame the Aussies turned in their guns a few years back. Being assaulted by two people at the same time, weapons or not, is grounds for sending some lead downrange.

Bolt is my new hero! Better than that pu$$yhat wearing PM they have. He took on three of them, and it wasn’t enough! Pansy pajama boys had to run home to mommy’s basement!