“Tweets are powerful, and the President must be held accountable for every post.” 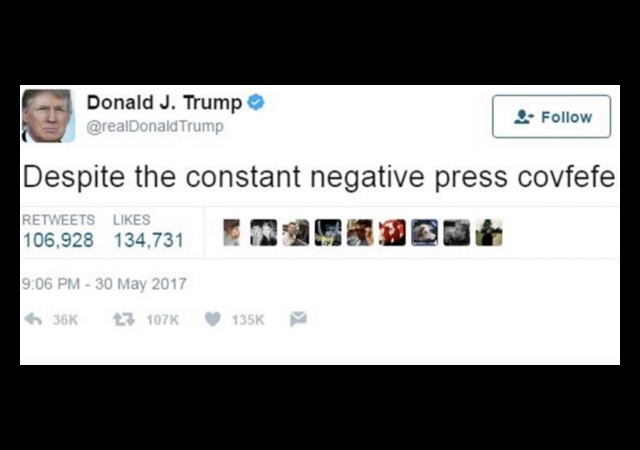 President Donald Trump sure loves Twitter! This is why Rep. Mike Quigley (D-IL) introduced the Communications Over Various Feeds Electronically for Engagement Act, which would preserve all of Trump’s tweets as presidential record.

Yes, the acronym is COVFEFE to mock Trump’s infamous tweet when he wrote “Despite the constant negative covfefe.” The word took off online.

Trump caused even more of a stir when he followed that tweet with this one:

To make matters worse, Press Secretary Sean Spicer confirmed it was not a typo, but that Trump “and a small group of people know exactly what he meant.”

National Archives spokesperson Miriam Kleiman said in January “that social media posts would qualify as presidential records, but that statement is not explicitly spelled out in the law.”

So why not make it a law?

Presidential records must be preserved, according to the Presidential Records Act, which would make it potentially illegal for the president to delete tweets.

“President Trump’s frequent, unfiltered use of his personal Twitter account as a means of official communication is unprecedented. If the President is going to take to social media to make sudden public policy proclamations, we must ensure that these statements are documented and preserved for future reference. Tweets are powerful, and the President must be held accountable for every post,” said Quigley in a statement.

As The Independent points out, Trump has used Twitter to lash out at “the mayor of London, deemed his executive order on travel restrictions a ‘travel ban,’ and threatened former FBI Director James Comey with ‘tapes’ of their conversations.”

But Comey’s notes are private property.

Why would he want them to be part of the government record? Things get lost in there all the time…like IRS records, for instance.

notamemberofanyorganizedpolicital in reply to healthguyfsu. | June 12, 2017 at 6:44 pm

Wasn’t I just reading about this dude here last week?

James Comey’s Media Leak Conduit, Daniel Richman, Goes into Hiding… Oh, this is transparently suspicious. But don’t anticipate the media to point out that transparently innocent people do not need to duck for cover.

The Columbia University professor, Daniel Richman, that fired FBI Director James Comey utilized as the go-between to provide leaks to the media, has gone into hiding.

Quoth Twitchy, “The internet is forever.”

notamemberofanyorganizedpolicital in reply to RedEchos. | June 12, 2017 at 6:48 pm

They don’t even know (like Mike) how outright stupid, ignorant and corrupt this frames them.

They don’t even have a clue about the technology they’re dumping on.

“threatened former FBI Director James Comey with ‘tapes’ of their conversations.”
I don’t recall Trump threatening Comey: I must have missed it.

Trump did not threaten Coma-Comey.

“I hope there aren’t any tape recordings of your meetings that come out.”

Paraphrasing from memory there – which typing it out just now makes it appear to be more about Trump “funning” Comey about the Richard Nixon tapes…….

which would make it potentially illegal for the president to delete tweets.

But according to the Comey Criterion, if they can’t show “intent” there’s no crime.

The Dems and their minions are hoist on their pestilential petard once again.

“Yes, the acronym is COVFEFE to mock Trump’s infamous tweet”

Is this all they’ve got?
An Act of Congress? Don’t these losers (on both sides of the aisle) have better things to do on my dime?
How sad and pathetic Democrats have become.

notamemberofanyorganizedpolicital in reply to Pelosi Schmelosi. | June 12, 2017 at 7:08 pm

I bet that COVFEFE is something that would really, really embarrass the enemy if it was spelled out.

Another brilliant idea from the party of Harry Reid.

The stupidity and vileness of the Left continues to grow day by day. Their Trump hate has stripped them of any ability to be objective or rational

Why should this apply only to the president and not Congressmen, Senators, and all other federal and state workers. Plus the requirement that they cannot use social media anonymously.

This proposal is entirely consistent with members of Congress. Remember these are the people who are so very sophisticated they do not know, still, that microphones can be open and broadcast what they say “secretly”, and that there is such a thing as video, whether film, videotape, digital recording, that records what they say in public and even not in public. How could you expect someone to know that tweets are public and live forever?

I’ve yet to see a deleted tweet by President Trump. The replies to his tweets though, I see plenty of them being deleted. There are some rabid individuals that hang on his every tweet and some of them are politicians. If the Presidents tweets need to be preserved then every retweet, quote tweet and like need to be preserved.

“The President must be held accountable for his tweets,” as if the President’s social media interactions are part of the course of business?

Oh, you mean like how Obama is being “held accountable” for every asinine “signing statement” he ever uttered, even though such statements aren’t a relevant part of the process and have zero bearing on how legislation is implemented?

Sounds to me like “embarrass Trump” legislation. That’s its only purpose.

Just remember, turnabout is fair play. The Dems in Congress want to hold Trump accountable for his tweets, but they also have Twitter accounts, and we’re also paying attention to what they say. The Internet is forever for them, too.