Pompeo: “I cannot imagine a statement that is any more false” than that Pres. Trump is not interested in intel 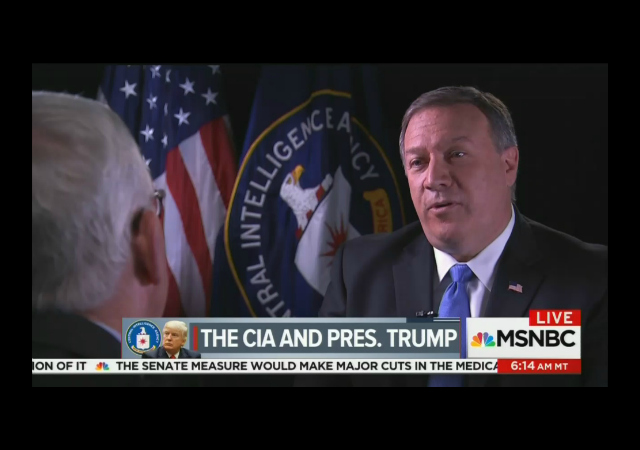 For the debut of his MSNBC show this morning, Hugh Hewitt scored the first news network interview with CIA Director Mike Pompeo.

Debunking an assertion made by some, Pompeo said he couldn’t “imagine a statement that is anymore false” than the notion that Trump isn’t interested in intel.

Pompeo stated that he personally meets with Trump for 35-40 minutes virtually every day, that Trump is an “avid consumer” of intel, and asks great questions.

Note: Pompeo began the interviewing by unequivocally stating that “this election was meddled with by the Russians.” Pompeo added that the Russian meddling “is frankly not particularly original. They’ve been doing this for an awfully long time and we are decades into the Russians trying to undermine American democracy. In some ways, there’s no news, but it certainly puts a heightened emphasis on our ability to figure out how to stop them.”

HUGH HEWITT: Now to the second part of my conversation with CIA Director Mike Pompeo, and his answer to how he works daily with the president.

HEWITT: Some of his critics like to allege he is uninterested in facts on the ground. What do you think of that?

POMPEO: I cannot imagine a statement that is any more false than the one that would attribute president Trump not being interested in intelligence and facts when it comes to national security. He’s an avid consumer of the products we provide, thinks about them and comes back and asks great questions, and then, perhaps most importantly, relies upon that information.

Mike Pompeo, first in his graduating class at West Point.
Versus the self proclaimed ‘C’ student in poly sci at Columbia whom nobody seems to remember, who somehow turned up as editor of the Harvard Law Review.

Let’s not conflate the position our first affirmative ation POTUS he with the Harvard Law Review: He was “President”—an elected position; not editor, a position based on proven merit.

Obama has not proven his personal merit in anything intellectual. Rather, the opposite appears true. He has NO merit to anything he says or allegedly writes, that’s not previously scripted by others, including his own alleged autobiography!

FAKE all the way!

Not only an elected position, but one in which they had to drag him across the finish line, after several rounds.

The organ-grinder media’s second favorite monkey is a complete fraud, an utter contrivance, a talentless poser, and worse: a traitor.

First, is of course, beta-male barry:

This has been obvious to me from very early in the campaign, well before I started to support him. I initially noticed that he was tightly tuned in to the gossip in New York and Washington, DC., and that he had enough familiarity with the characters to make solid guesses as to which bit of gossip was real. Every now and then he’d make a statement, very short, indicating that he knows his history, as well.

This point is crucial for the survival of the Democratic Party at the national level: they must recognize that their last Presidential campaign was based on a pack of lies and run by criminals.

That “basket of Deplorables” is made of ordinary American citizens of good will, many of whom voted for Barack Obama, some of them twice. The rest of America did not become suddenly uneducated white male sexist, racist homophobic Islamophobes. DJT himself did not become all of those things simply by running as a Republican instead of a Democrat.

The DNC and the Clinton Campaign engaged in criminal activity, at the very least by knowingly running rent-a-mobs. There is solid proof of this, to be found in the Project Veritas videos which contain multiple admissions on video by significant Democrats, the various leaked emails, and payment records disclosed under Federal law.

The Democratic Party must address these two issues, or it will remain regional and isolated. The simple truth is most nominal Democratic voters are also people of good will, who dislike open slander of their neighbors and will not tolerate random violence against American voters.

“…The Democratic Party must address these two issues…”
I would rather the DoJ addressed these issues. The vile, violent left has been allowed to skate for too long on these and other issues.

… and then, perhaps most importantly, relies upon that information.

But isn’t that widely believed to be part of the problem?

It is, if the Intelligence bureaucracy isn’t basically on Trump’s side.

In other words, just how much do the “intelligence community” and the Deep State overlap?

I have no idea how this could be evaluated. Investigation is nearly impossible, as any successful intelligence agency is going to be intensely secretive about its own affairs. If it’s both secretive and hostile, that would be a tough nut to crack.

This is a VERY shrewd man we’re talking about, and one of the toughest businessmen in history.

The Donald has settled in, surveyed the landscape, and is coming back for – as Fauxcahontas warren might say – scalps.

this story is obviously #FakeNews…

everyone knows #Drumpf is an idiot. i read all about it on line!

Unlike 0 who skipped about half of his (and it showed).

Even if he didn’t skip the, the briefings were way over his head anyway.

“…his silverback…” is explicitly racist, and you know it.

I’m surprised Fuzzy and the Prof. are letting you get away with that crap.

A characteristic often either overlooked or under-reported and not always appreciated about President Trump. It’s what sets him a part from some recent presidents as well as many of the political leaders from both parties.

“It is better to know some of the questions than all of the answers.” ~ James Thurber

The bigger story in all these past 8 years has been is the GOPe’s complicity with enabling a traitor holding the highest office in our nation. NEVER forget that. Those same quislings are still in office (boehner out, but Ryan is in as Squeaker II)