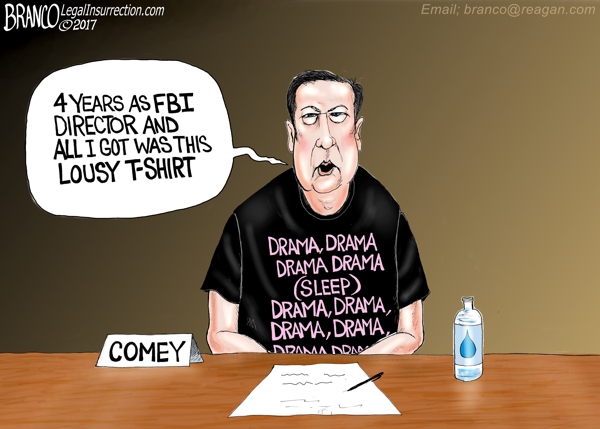 What it did was pull back the edges of the Obama/Rhodes Media Echo Chamber just a little bit.
And, my! Has Buraq Hussein Obama been busy pulling the puppet strings. “Call this a ‘Matter’ rather than an ‘Investigation’ didn’t come from the mind of Loretta Lynch. It came from someone higher up the food chain, the same as Janet Napolitano’s 2009 remark “Its a bright, warm, sunny day in April, 2009. The War on Terror is over”
Janet simply lacks the intellectual gravitas to come up with a statement like that, herself. Like Loretta, someone else put those thoughts into her head.
Little wonder UC Berkely is the way it is, today. The inmates are running the asylum.

notamemberofanyorganizedpolicital in reply to Bitterlyclinging. | June 9, 2017 at 9:49 am

My hope is that Comey’s firing is the beginning of the end of the Trump administration. And that includes Sessions.

notamemberofanyorganizedpolicital in reply to Lee Jan. | June 9, 2017 at 9:50 am

That worked out so well for the Never-Trumpers, and for Hillary……….

My hope is that Michael Moore loses 200 pounds and becomes a conservative. I hope you are as prepared to be disappointed as I am.

I bet Comey got a lot more than just a “T-shirt” from HObmama and the Clinton Mob……….

All he got was a T-shirt and a $10 million payoff from Simon & Schuster.

Sums up the whole 3 ring circus beautifully. Sadly the left is unwilling to give up the nonsense.